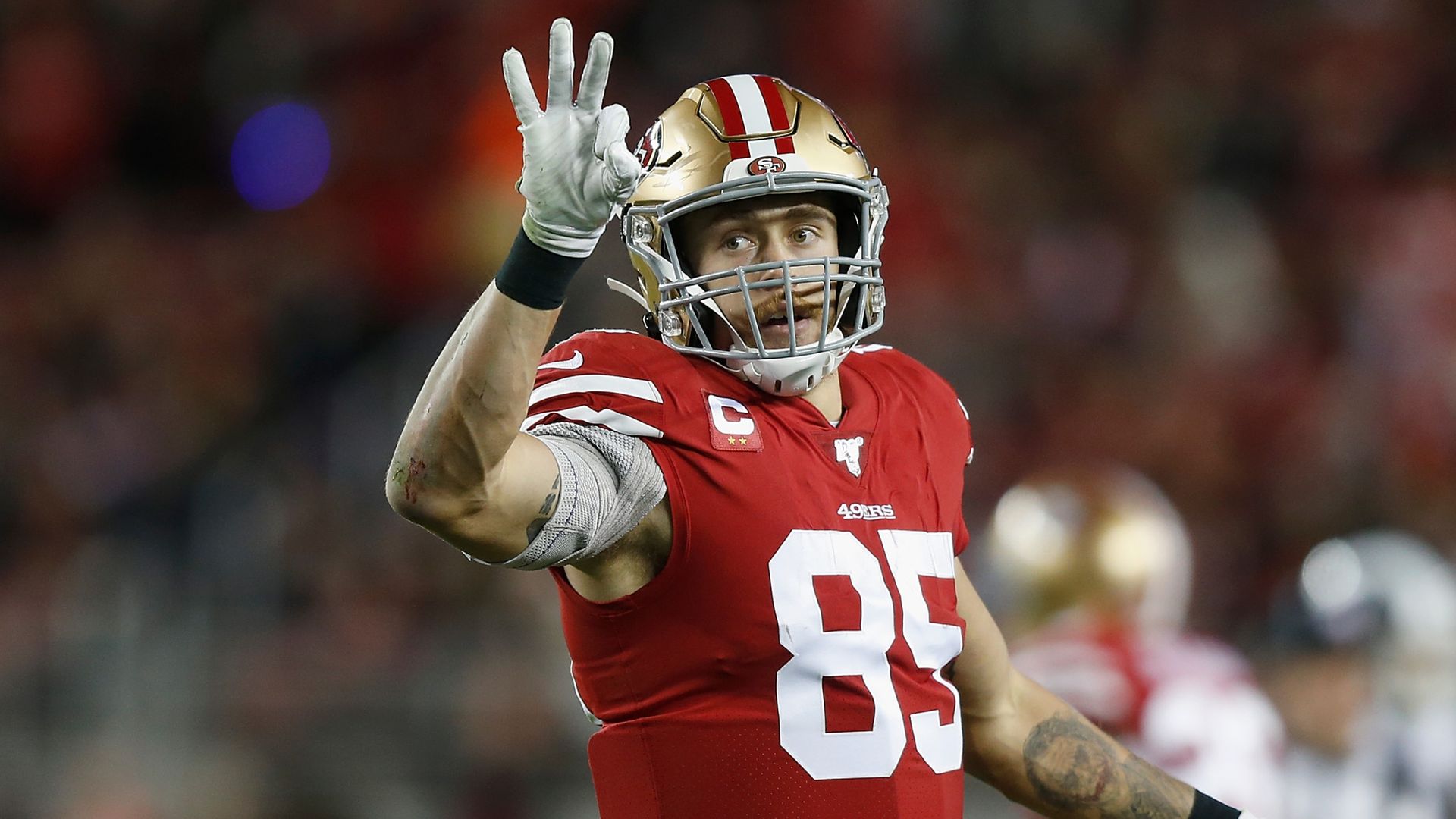 The wait is nearly over and the new NFL season is almost upon us!

The action begins on Thursday, September 10 when the Kansas City Chiefs host the Houston Texans, live on Sky Sports.

Before then, it is time to assess 2020’s contenders.

We are previewing all eight divisions, and here you can find our views on the NFC West…

Key man: George Kittle. Arguably the NFL’s best tight end, and unquestionably the best paid one, having agreed to a five-year, $75m extension with the 49ers in the offseason. Not only is he an utterly dominant blocker at the line of scrimmage, Jimmy Garoppolo’s go-to target in the passing game, but Kittle is also the heartbeat of this team, so it was vital San Fran secured his services as they look to go one better following their Super Bowl heartbreak in February.

Major additions: It has been more of a case of minor tweaking to the roster over radical changes. The 49ers know they have a good thing going and their offseason activity has been more catered towards keeping hold of key contributors, with both Kittle and breakout running back from late last year, Raheem Mostert, penning new deals. They couldn’t keep hold of everyone, however, and wide receiver Emmanuel Sanders has left for New Orleans in free agency and defensive tackle DeForest Buckner was traded to the Colts. The 49ers have attempted to address the gaping holes left behind with the additions of DT Javon Kinlaw (No 14) and WR Brandon Aiyuk (No 25) in the draft.

Last Season: Within touching distance of a record-equalling sixth Super Bowl victory; the 49ers had one hand on the Vince Lombardi trophy when they led Patrick Mahomes and the Chiefs 20-10 midway through the fourth quarter, only to spectacularly implode in the final few minutes, losing 31-20. It will be a tough task to bounce back from that, but the loss should not take away from what was an otherwise hugely impressive season – a 13-3 record and then drubbings of the Vikings and Packers on their way to Super Bowl LIV.

Prospects: This might not quite be as talented a crop as the one that took them all the way to Miami in February; Buckner, in particular, is a big loss on the defensive line. But, with Shanahan at the helm – arguably the most exciting coach in the NFL, even with further game-management questions levelled at him following San Fran’s Super Bowl collapse – expect the 49ers to be relevant at the turn of the year once more.

Key man: Russell Wilson. It has to be, with their quarterback regularly winning games for Seattle almost single-handedly. Though he was quite comprehensively knocked off his perch as the NFL’s best-played player by Mahomes this offseason, Wilson is comfortably in the top tier of ‘elite’ quarterbacks in the league and certainly the best in this division.

Major additions: It had been an underwhelming offseason of activity in Seattle, that is prior to the signing of All-Pro safety Jamal Adams from the Jets. The blockbuster trade sees Adams arrive and the Seahawks pick up a 2022 fourth-round draft pick in exchange for two first-rounders (2021 and 2022), a further third-rounder next year and Bradley McDougald. Adams will pair up with Quandre Diggs, last year’s big acquisition from Detroit in a new, post-Legion of Boom looking secondary.

Last season: An eighth trip to the postseason in 10 years under Carroll, who always has his team ready to play – Seattle’s record in one-score games last year was 11-3. They pushed the 49ers all the way to the wire for the division title, and had tight end Jacob Hollister broken the goal line of the last play of the game in their final-week tussle for the No 1 seed, there may well have been another Super Bowl berth for the Seahawks instead of a divisional round exit in Green Bay.

Prospects: The Seahawks are a hard team to place. With Carroll in charge and Wilson at QB, they’re always competitive. In recent years too, they have tended to punch above their weight, with their roster not necessarily the most talent rich. Their pass-rush – or lack thereof – is a worry, but expect them still to be San Francisco’s closest challengers.

Key man: Aaron Donald. No doubt. The monstrously disruptive defensive tackle was often referred to as ‘the best player in all of football’, until maybe Mahomes arrived, as, let’s face it, quarterbacks tend to get all the glory. That is except when they come up against Donald – a one-man QB-wrecking machine.

Major Additions: There has been more activity out the door at the team’s new SoFi Stadium than entering the building – Brandin Cooks, Todd Gurley and Dante Fowler to name a few – following on from a couple of years’ of aggressive moves in free agency. The Rams are now paying the price for that, devoid of draft picks, with none in this year’s first round, however, a lot is expected of Cam Akers, their second-round pick out of Florida State, who takes over from Gurley as lead back in L.A.

Last season: The dreaded Super Bowl (losers) hangover. The Rams had romped to a 13-3 record in winning the West in 2018, but hot-shot head coach McVay made way for a new flavour of the month in Shanahan last season as the 49ers assumed their spot as West winners and Super Bowl (losing) finalists. The Rams were very much in the mix at 8-5 in the closing weeks before back-to-back defeats to Dallas and Shanahan’s upstart squad knocked them out of playoff contention.

Prospects: Rams fans are concerned. They were Super Bowl finalists only a mere 18 months ago, but has their window of opportunity already closed? They missed out on the playoffs altogether last year with a 9-7 record and have since lost a fair amount of talent on their roster, though many could rightly argue that the contributions of the aforementioned Cooks, Gurley and Fowler in 2019 were of little consequence. A refresh in personnel, but not necessarily in results.

Key man: Again, it can only by Kyler Murray. Sure, DeAndre Hopkins is now too in Arizona – after a bonkers trade deal from the Texans – but more on him in a moment. Murray, the 2019 Draft first overall pick, was quite rightly named Offensive Rookie of the Year after throwing for 3,722 yards and 20 touchdowns, to go with 544 further yards and four TDs rushing. He looked the real deal and those numbers should only improve in his sophomore season.

Major additions: The NFL is still reeling from the trade that saw the Cardinals add four-time Pro Bowler and three-time first-team All-Pro Hopkins to their receiving corps (and a 2020 Draft fourth-round pick) in exchange for just a second-round selection and fading force of a running back David Johnson to the Texans. Hopkins had 1,165 yards and seven touchdowns in 15 games last season, and that was a down year by his standards. Also, on the defensive side of the ball, look out for linebacker/safety hybrid Isaiah Simmons – the No 8 overall pick in the draft – who Cards fans are very excited about.

Last season: The ‘Kyler Murray Effect’ gave this floundering franchise the desired kick it needed, with the decision to draft the dynamic, dual-threat QB No 1 overall – and pairing him with NFL novice head coach Kingsbury – resulting in a jump from 3-13 in 2018 to 5-10-1 last year. On paper, that might look like the most minor of movements upwards, but of those 10 losses, they twice ran the NFC champion 49ers close and lost in one-score games to the league-leading Ravens, the Rams and the Buccaneers.

Prospects: The popular ‘dark horse’ pick for the postseason in 2020. But, as the Browns proved last year, quickly acquiring a talented roster doesn’t always translate to immediate success on the field. There will be a flirtation with the playoffs, but 2021 is a more realistic target for the Cards to make the leap.