A clash of undefeated, dual belted titlists might be just over the horizon at Jr. welterweight.

The horizon remains distant until all hurdles are clear.

Before boxing fans can seriously wonder about a Josh Taylor-Jose Ramirez fight, both men have fights to win over the next month or so. Ramirez is up first.

Delayed twice by the ongoing pandemic, Ramirez finally squares off with WBC mandatory Viktor Postol in one of the toughest assignments of his career to date. For Postol, closer to 40 than he is to 30, there can be no looking back Saturday night (ESPN+, 7:30 PM EST). 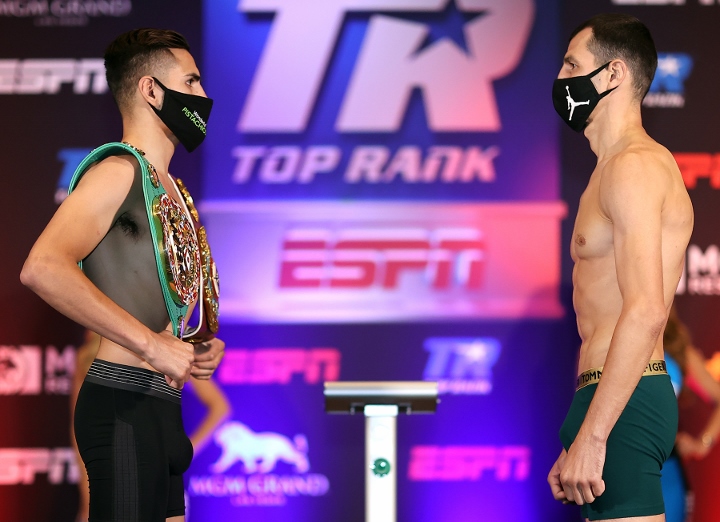 The Case for Ramirez: Ramirez is seeing a man with an advantage in height and reach for the second fight in a row after Hooker. What he won’t see this time is the same sort of edge in speed. Ramirez has been a work in progress since his appearance in the 2012 Olympics and developed an increasingly rounded game. He’s built a solid fundamental base. He often puts a lot on his shots but he’s improved in setting up his thudding power attack. His jab is hard, steady, and straight. Against a Postol who may try to tie him up and frustrate him in spots, Ramirez’s jab and body attack will be critical. Postol sometimes moves his hands to distract as much as apply offense, changing speeds and keeping opponents off balance. Ramirez has to punch with him, allowing what will likely be the harder shots to catch the judge’s eyes. If Ramirez comes in focused on being consistent and winning a decision, and doesn’t look for the knockout, he has a good chance to grind his way to a clear win.

The Case for Postol: Postol is fundamentally sound with good balance and a keen ability to use his length to his advantage. He uses his jab multiple ways and varies speeds on his combinations. Sometimes he wants to land hard; others he can be seen just touching opponents in multiple to keep them off balance. Postol has a nice uppercut and a canny way to loop the right around the guard. Ramirez may be a little quicker but he’s going to press the action. Postol is better against pressure than movement. If he can time Ramirez and keep him turning, Postol has a chance at what would be a minor upset.

The Pick: With both competitors entering off more than a year out of the ring, rust shouldn’t be mitigating for either. They’ll shake off what they have together. Both are tall for the division so there could be some awkward spots. Ramirez is probably the naturally bigger man with a frame more likely to see higher weights before he’s done and his physicality should be a big factor here. Postol has shown an excellent chin to date and good stamina but the heavier hands and advantage in speed lean to Ramirez. The younger titlist’s activity and more eye-catching offense should be enough for a decision that keeps the road paved for a showdown with Taylor.