The latest contribution to that cause came in the form of a 3rd round stoppage of Cody Wilson in their 144-pound catchweight bout Saturday evening from MGM Grand Conference Center in Las Vegas.

Rodriguez scored two knockdowns, with the latter producing an immediate stoppage at 1:03 of round three. 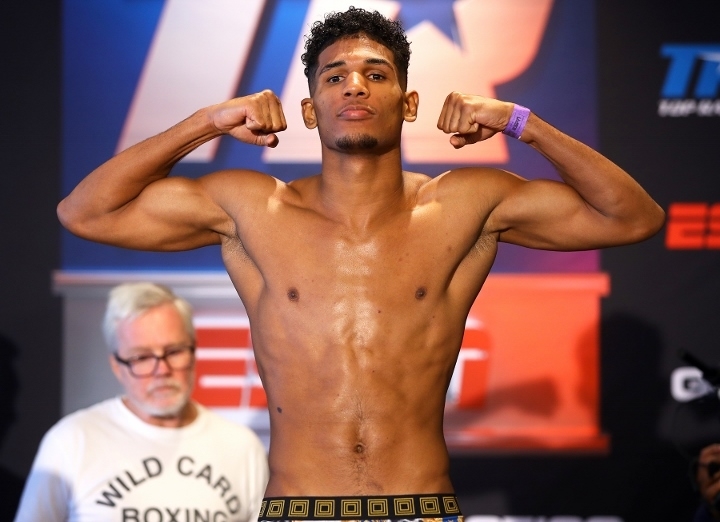 “This fight was for my mother,” Santo Domingo’s Rodriguez told ESPN’s Bernardo Osuna after his latest win. “Today is her birthday and I wanted to deliver a knockout win to her.”

Rodriguez was pressed with an opponent who had never been dropped or stopped in his career, though it didn’t take long for part of that equation to change, A straight left hand by Rodriguez put Wilson on the seat of his pants midway through the opening round. To his credit, Wilson was able to shake off the sequence and finish the rest of the frame on his feet, though unable to land anything of consequence.

Round two saw Rodriguez fight at a controlled pace. The Dominican southpaw poked with his jab, often to set up a straight left or right hook. Wilson tried to open up his attack toward the end of the round, only to get clipped with a right hook and right uppercut which ejected his gumshield.

The fight finish saw Rodriguez at his best. A jab pinned Wilson against the ropes, attempting to punch his way out of trouble. Consecutive right hands by the Army Reserve sergeant wildly missed their mark, with Rodriguez watching the shots sail by before connecting with a classic one-two. A right jab froze Wilson (9-3, 6KOs) in place for a straight left to put him flat on his back.

Referee Robert Hoyle waved off the bout without a count.

The win is the third in Las Vegas this summer and fourth of 2020 for Rodriguez, who improves to 9-0-1 (9KOs). The rising junior welterweight is trained by Hall of Fame cornerman Freddie Roach, who called the young prospect the future of his boxing stable.

“Obviously when someone like Freddie Roach, a Hall of Fame trainer, says that about me, it’s amazing,” notes Rodriguez. “At the same time, it also puts pressure on me to deliver.”