Seven days after one British heavyweight hope saw his hopes of a big fight down the line wrecked, Daniel Dubois returns to action keen to prevent his all-British showdown with Joe Joyce sidetracked when he face Ricardo Snijders at the BT Sport Studios in London on Saturday night.

One of Dubois’s biggest assets is his ability to keeping one foot in front of the other while some around him are talking about the mountain top. Defeat is unthinkable. Snijders is no Alexander Povetkin, but some would say Dubois is no Dillian Whyte. Not yet anyway.

So much of boxing is about anticipation, about unearthing prospects, building up to fights that may or may not ever happen. So far Dubois has been pretty faultless in his professional career. He looks the part, both size and skills wise, he doesn’t have any obvious chin or stamina issues. 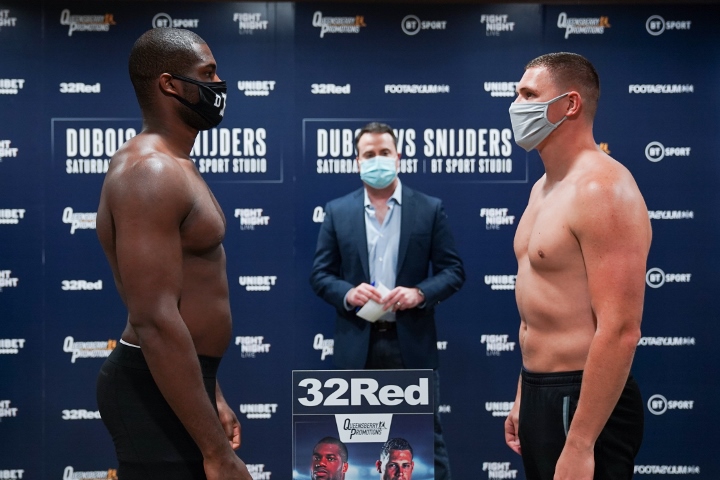 If people believe the hype train has already gone over the top about the South Londoner, imagine what it would be like if he wasn’t in an era that had Tyson Fury and Anthony Joshua. Britain was once the land of horizontal heavyweights, now there is a production line of talented big guys that is the envy of the rest of the world.

What Dubois lack is experience. He is, after all, only 22. He only had a handful of senior bouts as an amateur to go with his 14 pro fights. Most of his development has been done in the gym. He switched amateur clubs on a regular basis in search of building his knowledge and has been sparring professionals since his contemporaries would have been in school.

In Snijders, a late replacement for seasoned German amateur star Erik Pfeifer, Dubois has been handed a straightforward task. Snijders has a decent record against people you have never heard of, which makes for a nice graphic on television, but he should not really provide much of a test.

Martin Bowers, Dubois’s trainer, expects the Dutchman to “give us some rounds”. They have tried that before but Dubois tends to get them out early.

What Whyte’s defeat to Povetkin and Jono Carroll’s surprise defeat to Maxi Hughes shows is that the enforced break from the coronavirus pandemic should not be underestimated. Dubois boxed five times in 2019 but has not boxed since he flattened Kyotaro Fujimoto in December.

Originally the plan had been for him to box in March and build towards a summer fight with Joyce, but when Joyce’s European title fight with Marco Huck in January was scrapped, Dubois-Joyce was made for May, then July, now October, but, in reality, who knows for sure? Time, at least, is on his side.

During the lockdown, Dubois trained alongside his younger sister, Caroline, and brother, Prince in a converted garage at their Essex home.

“We put a few bags up and we all had enough space to get our work done,” Dubois said. “We all train together, we’ve always trained together form Day One. We didn’t have much but our Dad gave us the push, for the dedication and commitment that we needed to go far.

“I’m glad to be back on, I can’t wait to get back to business again. The gym has been quieter than usual, but the fight is going to be the same with no crowd there. This is my main priority. Nothing can sway me from this.”

Expect Snijders’s name to be forgotten by the time the post-fight interviews are concluded. If it can happen this year, Dubois v Joyce is a serious domestic fight, rightly compared to Lennox Lewis’s British and European title fight with Gary Mason. That was nearly three decades ago, an era when British world champions were thin on the ground and a world heavyweight champion was still the thing of dreams. Now Dubois finds himself expected to reach that standard.

“This is the right test I need to prepare for Joe,” he said. “But I’m not thinking about Joe Joyce and I’m not going to take this lightly. I’m going to go in the ring and fight my heart out, like I always do. If the chance comes to take him out, I’m going to do it. I’m ready for a war.”