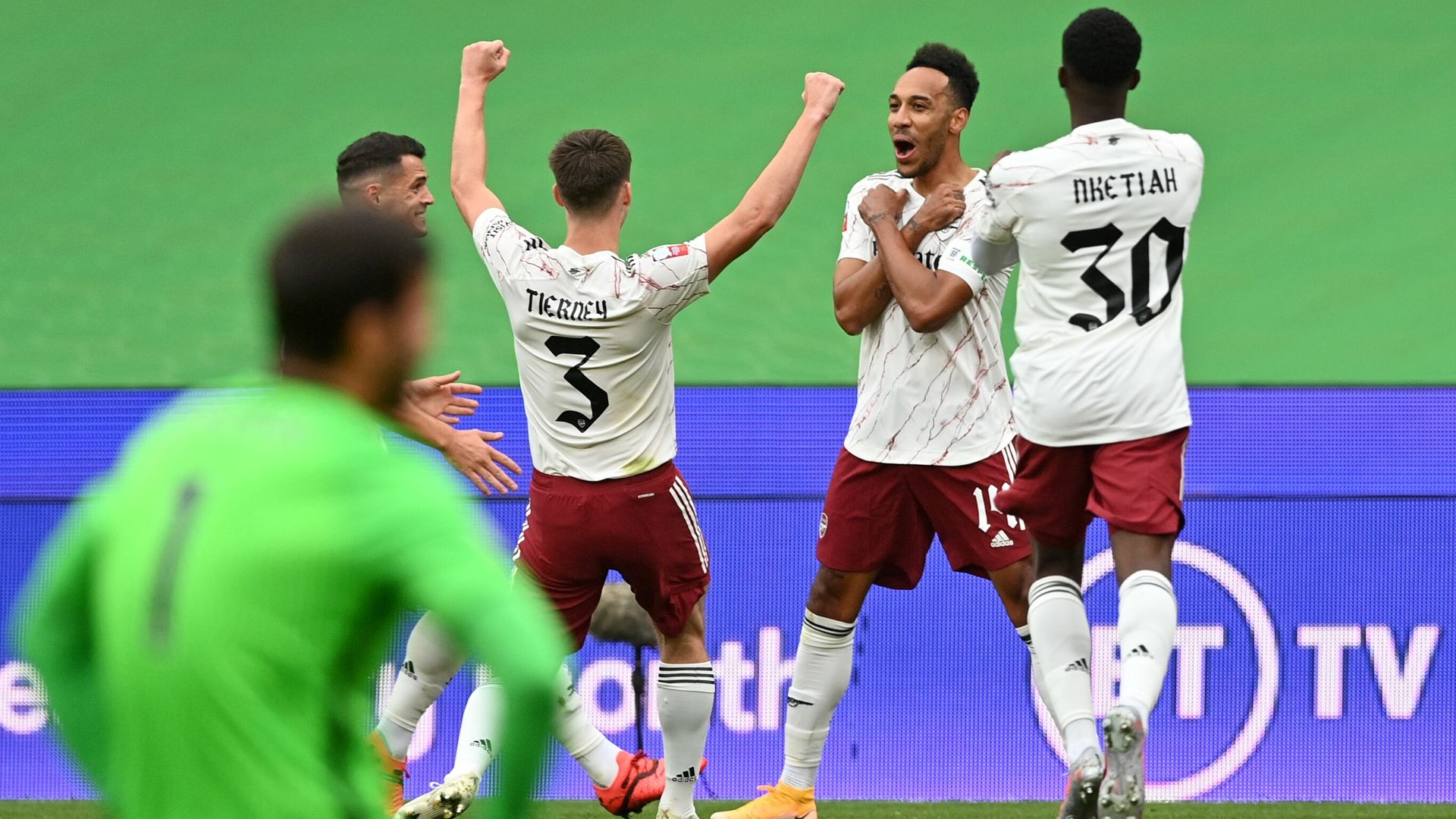 Who stole the headlines and who was below-par as Arsenal beat Liverpool on penalties to lift the Community Shield?

Pierre-Emerick Aubameyang’s fantastic early strike handed Arsenal the lead and they held on for a long time at Wembley, before sub Takumi Minamino took his chance and converted from close range to draw Liverpool level.

Joe Willock went closest to a winner but he couldn’t direct a free header on target with five minutes left, not that it mattered in the long run.

Rhian Brewster, brought on in stoppage-time to take a penalty, was the only player to miss as he blasted his effort against the crossbar and Aubameyang netted the final pen to hand the Gunners a 5-4 victory from the spot.

Not forced into a save before the break as Arsenal’s defence kept Liverpool out, but twice came off his line quickly to deny Mane, either side of Minamino’s strike. He has taken his chance between the sticks with both hands and is full of confidence.

Always a threat going forward and defended with discipline before going off. Will be disappointed at the amount of times Robertson was able to whip the ball into the box.

Gave the ball away whilst trying to play out from the back too often and did look nervous when doing that. Went about his defensive work well for the most part.

Tipped to head to Newcastle on loan and the centre-back showed at Wembley why they would want him. Dealt with Liverpool’s potent front three well and only let Mane get in behind him once from a long Van Dijk ball.

Showed his usual desire to defend and clear balls from his box and also got forward lots, acting more as a left-back when Arsenal had the ball and a centre-back when they didn’t. Tired as the game wore on but set for a big season.

The youngster really grew into the game and was fantastic up against Mohamed Salah and Liverpool’s forwards. It’s tough to see why Arsenal are reportedly prepared to sell the youngster, with Wolves interested, and he keeps producing on the big stage.

Probably never expected to pull on an Arsenal shirt again after spending a season on loan at Besiktas but produced a neat and tidy display. He used the ball sensibly when he had it and as part of the deep midfield duo, frustrated Liverpool.

Did the ugly parts of the game so well in the first half as he picked up loose balls and made important interceptions. A vocal presence in the middle too.

Seems to get better and better every time he plays. A great ball out to Aubameyang helped set up the goal and he should have had another assist when a perfectly-weighted pass led to Nketiah forcing Alisson into a smart save. Quieter after the break as Liverpool penned Arsenal inside their own half.

Lively through the middle and showed Arteta enough prior to the break to suggest he should be used there regularly. May feel he should have beaten Alisson in the first half but he did little wrong with his low finish.

Delivered with his very first involvement. Fantastic finish into the top corner to make it five goals in his last three games at Wembley. Aubameyang has so much quality in the final third and the Gunners absolutely have to keep him if they want to progress this season.

Needless foul on Minamino gave Liverpool a dangerous free-kick and saw the ball rebound off him to set up Minamino’s equaliser rather unfortunately.

Should have done better with a free header inside the box but could only direct it wide of the far post.

Showed good character to net from the spot.

There was little Alisson could do with Aubameyang’s fine strike but he did make a fantastic low save to prevent Nketiah make it two shortly after. Aside from that, it was not a difficult afternoon for the Brazilian as Liverpool dominated the ball.

A nervous display from Williams who struggled with the fantastic Aubameyang. Gave the forward far too much space for the goal and was afforded little help from those ahead of him.

Felt the wrath of Van Dijk when he gave the ball away early and didn’t always look comfortable as Nketiah buzzed around him. Shifted to right-back in the second half and showed his versatility.

Was needlessly offside as he converted Robertson’s early free-kick. Went about his defensive work with his usual calm demeanour and sprayed a couple of lovely long balls, including one for Mane early in the second period.

Liverpool’s best player in a surprisingly lacklustre first-half performance, Robertson put in eight crosses and they were all of the highest quality before the break. That nobody got on the end of them was not his fault and he carried that role on throughout the game.

After a bright start, he gave the ball away twice in quick succession which seemed to dent his confidence. Moved back into centre-back but was not tested greatly.

The veteran was Liverpool’s best midfielder while he was on the pitch, always busy and looking to find pockets off space when going forward.

Uncharacteristically sloppy in possession during a poor first-half display and just failed to make any sort of mark on proceedings. Was a surprise to see Milner taken off rather than the Dutchman.

Twice found himself thwarted by Martinez racing off his line to smother his attempts. Maybe should have done better with the first but was by far the sharpest of Liverpool’s much-vaunted front three.

Just could not involved in the game although it wasn’t for a lack of trying. He had to leave the right flank to try and find opportunities as he tried to make an impact but Arsenal’s stout defence kept him very quiet.

Anonymous in the first half, Firmino came close to equalising as he picked up the ball and tried his luck from outside the box shortly after the break. But he found service lacking and when the balls were played into the box, the Brazilian could not get on the end of them.

A really bright appearance off the bench from Minamino and he notched his first Liverpool goal as a result. Great composure when the ball bounced his way to beat Martinez. Had tried his luck from range shortly after coming on with a shot that was easy for Martinez and cleverly won a free-kick off Soares before that strike too.

Yet to live up to his price-tag and didn’t have the same influence as his fellow sub Minamino.

A well-taken penalty when he had to score.

Missed the penalty after being brought on just to take it.