Thomas LaManna thought he had recorded just the type of win he desperately needed to rejuvenate his career Saturday night in Los Angeles.

That was until Jimmy Lennon Jr. announced that all three judges disagreed with his opinion of how he fought against Brian Mendoza in their 10-round junior middleweight match. Edward Hernandez Sr. (98-92), Steve Morrow (96-94) and Pat Russell (98-92) all scored Mendoza the winner of a fight FS1 televised as part of the Erislandy Lara-Greg Vendetti undercard from Microsoft Theater.

Matched against a harder puncher who had lost only a split decision in his first 19 professional fights, LaManna hurt Mendoza during the fourth round, out-boxed him at times and out-landed him overall, according to CompuBox’s unofficial punch stats. LaManna, who answers to the nickname “Cornflake,” still suffered his second straight defeat. 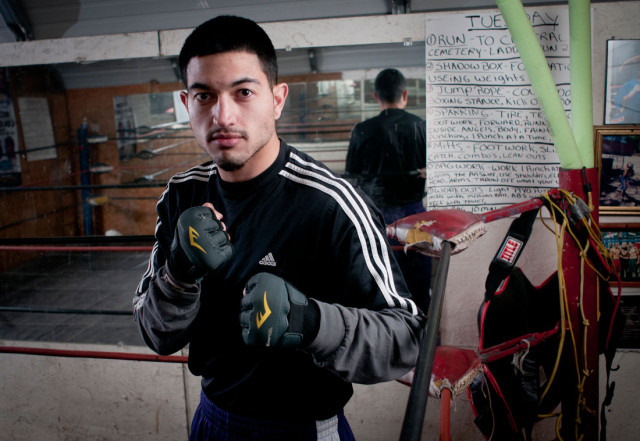 The 28-year-old LaManna (28-4-1, 10 KOs), of Millville, New Jersey, performed much better, however, than he did during a fifth-round, technical-knockout defeat to Mexican veteran Jorge Cota (30-4, 27 KOs) in his last fight, January 18 at Liacouras Center in Philadelphia.

The 26-year-old Mendoza (19-1, 13 KOs), of Albuquerque, New Mexico, bounced back from a loss in his previous bout. In his prior appearance, Larry Gomez (10-1, 8 KOs) defeated Mendoza by split decision in an eight-rounder November 30 at The Cosmopolitan in Las Vegas.

Bob Arum’s Top Rank released Mendoza from his promotional contract after he lost to Gomez.

Mendoza came on in the last two rounds, but LaManna managed to fend off the rugged Mendoza during the final three minutes and made it to the final bell. Mendoza landed the harder punches on the fatigued LaManna throughout the 10th round, but LaManna took his power punches well.

After a seventh round in which LaManna continued to out-box him, Mendoza managed to have a stronger eighth round. He landed several hard body and head shots in the final minute of the eighth.

LaManna out-boxed Mendoza during the sixth round, when he alternated between orthodox and southpaw stances and out-landed Mendoza. LaManna nailed Mendoza with a right hand a few seconds before the sixth round concluded.

Mendoza landed a low right hand that sent LaManna to the canvas just before the end of the fifth round. LaManna took just a few seconds of the time referee Jerry Cantu afforded him to recover from that foul, but the round ended before the action really resumed.

A right hand by LaManna landed on the top of Mendoza’s head with just over 1:20 to go in the fifth round. LaManna’s straight right hand connected about 15 seconds later.

LaManna switched to a southpaw stance at times and pressured Mendoza for some of the fourth round. Cantu ruled with just over a minute to go in the fourth round that the cut over Mendoza’s left eye was caused by an accidental clash of heads.

LaManna boxed well from a distance for much of the third round, but he hurt Mendoza with a right hand that landed to the side of Mendoza’s head with just over 20 seconds remaining in it. Mendoza stumbled after absorbing that shot to his temple, but he survived that troublesome moment.

LaManna and Mendoza each landed right hands just before the second round concluded, but Mendoza’s shot seemed more effective.

Mendoza pressured LaManna throughout the first round. He landed a flush left hook with about a minute to go in the opening round, but LaManna landed a left hook of his own several seconds later.

LaManna connected with a straight right hand later in the first round.