The power isn’t quite there but middleweight seems to be a much better fit for Vincent Feigenbutz.

A sturdy test came at a new weight for the former 168-pound title challenger, who outboxed Jama ‘The Hammer’ Saidi in claiming a 12-round unanimous decision victory. Scores were 116-112, 116-112 and 118-111 in favor of Feigenbutz in their chief support, which aired live Friday evening on Sport 1 from Havelstudios in Berlin, Germany.

Feigenbutz was fighting for the second time in 2020, his previous appearance resulting in an 11th round stoppage loss to unbeaten super middleweight titlist Caleb Plant this past February in Nashville, Tennessee. The charismatic contender from Karlsruhe, Germany made the most of his time in the United States for his first career fight in country, though admittedly was out of his element—at least in physical size, or so he would only confess to in his vow to drop down in weight. 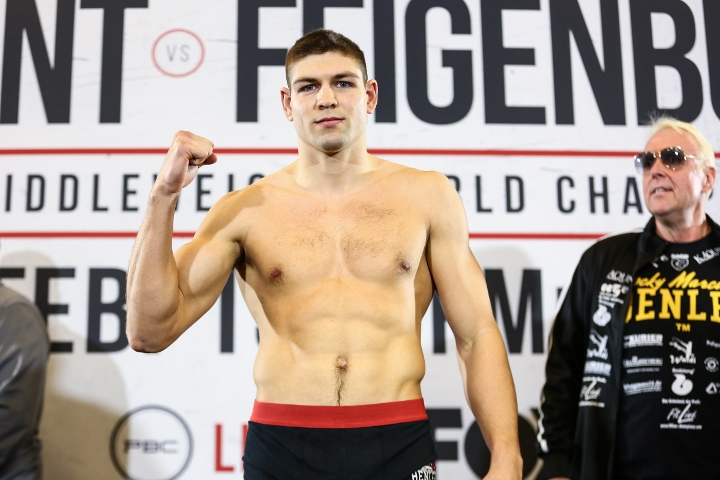 With it came his weighing in at a career-lightest 158 ¼ pounds for Friday’s showdown versus Cologne’s Saidi (17-2, 7KOs), who only recently moved up in weight after spending most of his career campaigning at junior middleweight.

It remains to be seen how far Feigenbutz can go in the 160-pound division, which doesn’t run very deep beyond the top level. However, it stands to reason that he will remain in the ‘best of the rest’ part at the weight where the middleweight elite stand far above the rest of the field.

For now, Feigenbutz will have to settle for outfighting local talent. Such is what took place on Friday, as Saida was far less ‘Hammer’ than nail in their awkward 12-round battle. Feigenbutz was clearly the physically stronger of the two, pumping his jab and landing several right hands over the course of the slow moving affair.

Saida attempted to offer lateral movement along with his own steady jab, managing to poke through enough to cause bruising under the right eye of Feigenbutz. It wasn’t enough to sway any of the judges to give him any more than four rounds, leaving Saida with his second loss in his last three starts. He suffered a 12-round loss to Jack Culcay (who fight in Friday’s main event) last November, marking his final fight at junior middleweight before moving up in weight earlier this year.

Feigenbutz advances to 32-3 (28KOs) in picking up his first victory in 54 weeks. The aforementioned loss to Plant snapped a 10-fight win streak, all but one coming inside the distance. Friday’s points win marked the first time Feigenbutz has heard the scorecards since a May 2017 win over Norbert Nemesapati.

The bout served as the chief support to a junior middleweight title eliminator between Jack Culcay (28-4, 13KOs) and Abass Baraou (9-0, 6KOs) to determine the number-two contender in the IBF 154-pound rankings.