Greg Vendetti ventured into a suburban Boston boxing gym for the first time when he was 16.

He had just brawled with several guys at a local carnival. That unfair, foolish fight ended with Vendetti evening the odds by grabbing a shovel from a stranger’s shed to fend off that group.

Vendetti determined if he was going to make such suspect decisions, he should at least learn how to throw punches properly.

A nearby mixed martial arts gym was way too expensive. Vendetti instead tried boxing, and so began his long career in the sport, unbeknownst to him.

“I don’t have like an inspirational story, really,” Vendetti told BoxingScene.com. “It was just I wanted to be better at beating the sh-t out of people out in the street. I mean, there’s really no other way of putting it.”

Erislandy Lara is consistently listed as a 50-1 favorite to beat the unknown contender Saturday night in Los Angeles. The comparatively unproven Vendetti (22-3-1, 12 KOs) is just three fights removed from French 154-pound contender Michel Soro knocking him out in the second round of their December 2018 bout in Paris.

Vendetti’s vicious knockout defeat to Soro has left odds-makers and other detractors doubtful that he can compete against even this 37-year-old, stationary version of one of boxing’s most skillful southpaws of this era.

“They’re going by what they see and what’s on paper,” Vendetti said. “So, when I hear the odds and I hear people’s opinions, that I’m gonna get killed or whatever it is, I would say the same thing if I were them. Just given what they see, what Lara’s done, on paper, and what I’ve done, I don’t blame ‘em for saying that. 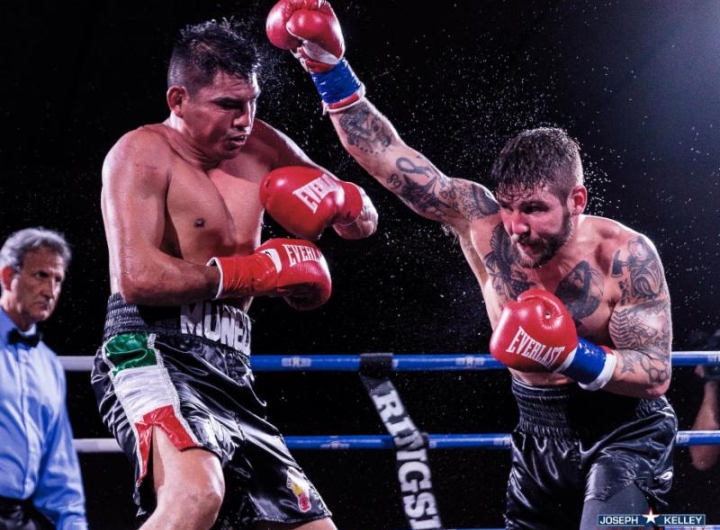 FOX will televise Vendetti’s fight against Lara (26-3-3, 15 KOs) as the main event of a three-bout broadcast from Microsoft Theater (8 p.m. ET; 5 p.m. PT). The Cuban-born Lara hasn’t fought since he blew out overmatched Mexican veteran Ramon Alvarez (28-8-3, 16 KOs, 1 NC) in the second round of another fight FOX aired last August 31 from Minneapolis.

The 30-year-old Vendetti, of Wakefield, Massachusetts, is the WBA’s 11th-ranked contender in the 154-pound division. The huge underdog’s handlers figure Lara views Vendetti as another opponent he’ll beat easily before trying to secure a more meaningful fight.

“Lara’s crafty,” Sullivan said. “He probably thinks that Greg could be tailor-made in the sense that he’s gonna be able to move around the ring and not have too much trouble. But I think they may have underestimated him. Greg’s a non-stop action fighter. The kid’s stamina is second to none. He does 12 rounds easy. He’s not even winded. I feel like they think they got an easy opponent in front of him, and sometimes, man, that can be the most dangerous opponent.

“It’s tough when you think you’re going in there and it’s gonna be an easy night for you and, all of a sudden, it turns into a lunch-pail war and you have someone who keeps the pressure on. We know Lara is – I wouldn’t say old – but he’s definitely getting up there. He’s 37 years old, that we know of. He could be a little older. We don’t know really know for sure. But I definitely think he’s in for a fight – that’s for sure.”

Vendetti, a licensed plumber who had only 35 amateur fights, has beaten Mexico’s Alan Zavala (15-7, 13 KOs) and New Jersey’s Michael Anderson (18-3-1, 12 KOs) by unanimous decision in back-to-back bouts since Soro knocked him cold early in their scheduled 12-rounder. In hindsight, Vendetti admits that he was overconfident when he opposed Soro because he had never been down as a pro or amateur and therefore devalued defense against one of the top boxers within their deep division.

He’ll be more mindful defensively versus Lara. The unheralded challenger also will battle Lara similarly to how Argentina’s Brian Castano attacked him in their 12-round title fight, which resulted in a split draw in March 2018 at Barclays Center in Brooklyn.

Vendetti studied footage of a fight he is convinced Castano (16-0-1, 12 KOs) deserved to win. He intends to dethrone Lara by applying pressure throughout their fight, and by making the champion stand and fight.

“He’s had a lot of fights,” Vendetti said. “He’s been around for a long time. Like I keep saying, he’s a little older. A big part of his defense is his footwork, his lateral movement, and he doesn’t do that as much anymore. You can see it in his performances. I don’t know if he’s just not able or he’s not willing, but it’s just not there as much. So, if he is there for me to hit, then I’m gonna get to him. You could see in the Castano fight, he put pressure on him, he walked him backwards and he didn’t have that lateral movement. And he got a draw.

“I think if he did have it, he’d still use it. He wants to win these fights, I’m assuming, so I think that’s gonna help me out a lot. But I’ve gotta imagine he’s the best version of himself, so we’ve prepared for the lateral movement, in case he somehow finds, I don’t know, some fountain of youth the next couple days to get moving. But, yeah, we’re ready for anything he throws at us.”

Vendetti didn’t hesitate to take this difficult fight on six weeks’ notice because he has been training to fight a southpaw since the beginning of this year. He was supposed to face California’s Cleotis Pendarvis (21-6-2, 9 KOs) on April 9 at Encore Boston Harbor, but that card was canceled due to the COVID-19 pandemic.

Vendetti views this not only as a coveted chance to win a world title, but an opportunity to redeem himself after his brutal loss to Soro (35-2-1, 24 KOs). He is motivated to prove Lara and countless others wrong as well.

“I think he sees my style as entertaining enough to be profitable, but I’m not dangerous enough to be a threat,” Vendetti said. “I think he sees me and my style as manageable. I think he thinks he can control the fight with the distance and the pace of the fight. And, you know, I don’t blame him. I’m a 5-6, short, flat-footed, white kid, with no amateur pedigree or anything like that. So, on paper, I understand it.

“But I think he made a mistake. I really do, because a lot of other people have felt that way about me, and they’ve lost. That’s happened multiple times in my career. I’m confident. I’m ready to go. I’m gonna give it my best shot, and if I go down, you better believe I’m gonna go down swinging.”