His most recent bout not only prepared Orlando Gonzalez for a certain fighting style but the circumstances under which said events now take place.

It won’t necessarily make things any easier when the unbeaten featherweight prospect makes his way to the ring on Friday.

Gonzalez will face Mexico’s Diuhl Olguin (14-13-4, 9KOs) in a scheduled eight-round bout from a crowdless Osceola Heritage Park (OHP) in Kissimmee, Florida (Friday, Telemundo, 12:00am ET). It comes two months after fighting in a different bubble environment, when he outpointed Colombia’s Luis Porozo behind closed doors at the MGM Grand Conference Center in Las Vegas.

This one, however, hits a little closer to home.

“It will feel weird to not fight in front of fans out here,” Gonzalez (15-0, 10KOs) confessed to BoxingScene.com. “It was easier in Las Vegas. My fan base isn’t as strong out there. Fighting there allowed me to get ready for the COVID protocol and quarantine that comes with every fight now.

“But I just fought here (at OHP) six months ago in front of all my fans. Orlando and Kissimmee is almost like another Puerto Rico. I will miss that energy when I’m in the ring but we all have to make the most of it.” 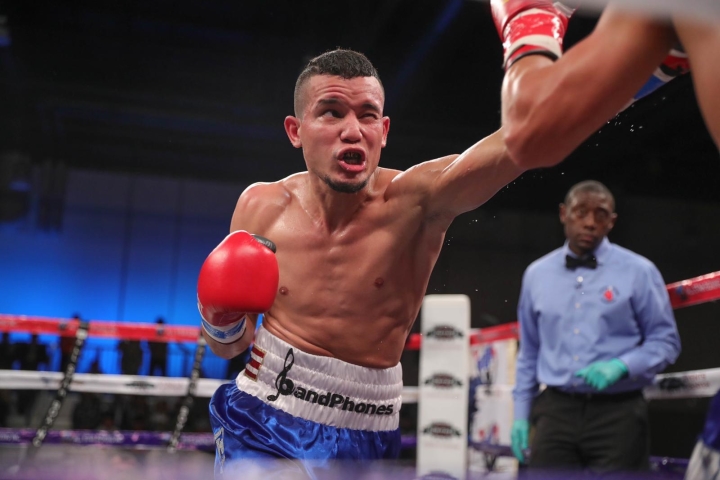 Gonzalez opened up his 2020 campaign in this venue, scoring a 4th round knockout of Charlie Serrano on the undercard of a Telemundo show this past February. Friday evening will mark the fourth career appearance at OHP, all coming in a 15-month clip for the 25-year old southpaw from Aguadilla, Puerto Rico.

It will be the first time that the venue won’t be packed wall-to-wall with adoring Boricua supporters. Instead, it will be onsite essential personnel only in attendance, coming on the tail of a fight week where interacting with the public has been replaced with COVID tests and isolation in his assigned hotel room until escorted to the venue in a personal and fully sanitized vehicle.

Still, it beats not fighting at all.

“I’m very grateful to Top Rank for keeping me active, getting my second fight during the pandemic,” acknowledges Gonzalez. “I greatly appreciate [All-Star Boxing president and owner Felix] Tutico Zabala providing the opportunity to fight on his shows. Even though the fans won’t be in attendance, I know they will be supporting me watching the fight on TV.

“One day we will be able to fight in front of fans again, and it will go back to feeling normal. For now, this is the third time this year I get to fight and have been given plenty of time to prepare for each one. That is as much as you can ask for under these conditions.”