One of the numerous ESPN fights that was postponed over the summer has been rescheduled.

BoxingScene.com has confirmed that Ivan Baranchyk and Jose Zepeda have again agreed to square off October 3 at MGM Grand Conference Center in Las Vegas. The 12-round, 140-pound bout between Russia’s Baranchyk (20-1, 13 KOs) and Southern California’s Zepeda (32-2, 25 KOs, 1 NC) will headline a show that’ll either air live on ESPN or will be streamed live on ESPN+.

Baranchyk-Zepeda will be a WBC elimination match to determine the number one contender for whoever wins the Jose Ramirez-Viktor Postol fight Saturday night at MGM Grand Conference Center. Zepeda is rated third by the WBC, three spots atop the sixth-ranked Baranchyk, a former IBF junior welterweight champ. 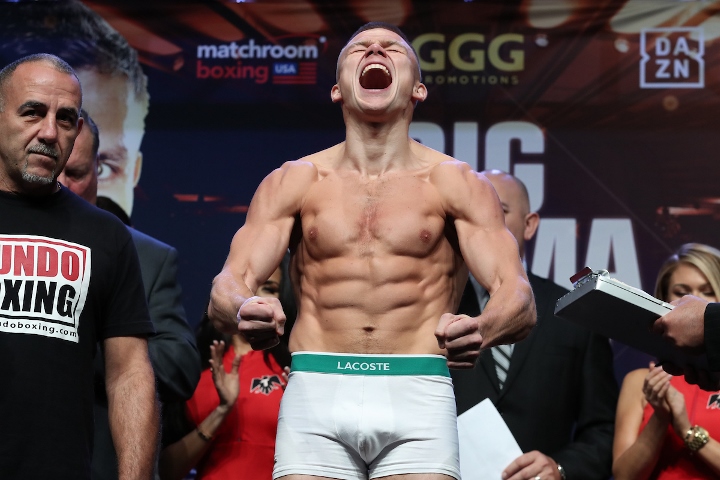 The Athletic’s Mike Coppinger first reported that Baranchyk-Zepeda has been rescheduled for October 3.

Baranchyk, 27, and Zepeda, 31, were supposed to fight July 7 at MGM Grand Conference Center. Baranchyk withdrew from that bout late in June due to a rib injury suffered during a sparring session.

If Zepeda, of La Puente, California, and Ramirez, of Avenal, California, win their upcoming bouts, Zepeda could get another shot at Ramirez. Zepeda lost a debatable, 12-round majority decision to Ramirez in their fight for Ramirez’s WBC 140-pound crown in February 2019 at Save Mart Center in Fresno, California.

Ramirez might have to win three more fights, however, for Zepeda’s quest for a rematch to materialize.

The WBC/WBO champion is a 7-1 favorite to defeat Ukraine’s Postol (31-2, 12 KOs) in a main event ESPN+ will stream Saturday night from MGM Grand Conference Center (7:30 p.m. ET; 4:30 p.m. PT). Ramirez is expected to box Josh Taylor (16-0, 12 KOs) in his following fight if he tops Postol and the Scottish southpaw successfully makes a mandatory defense of his IBF junior welterweight title against Thailand’s Apinun Khongsong (16-0, 13 KOs) on September 26 in London.

A mandated defense of Ramirez’s WBO title also is due. England’s Jack Catterall (25-0, 13 KOs) is the WBO’s number one challenger.