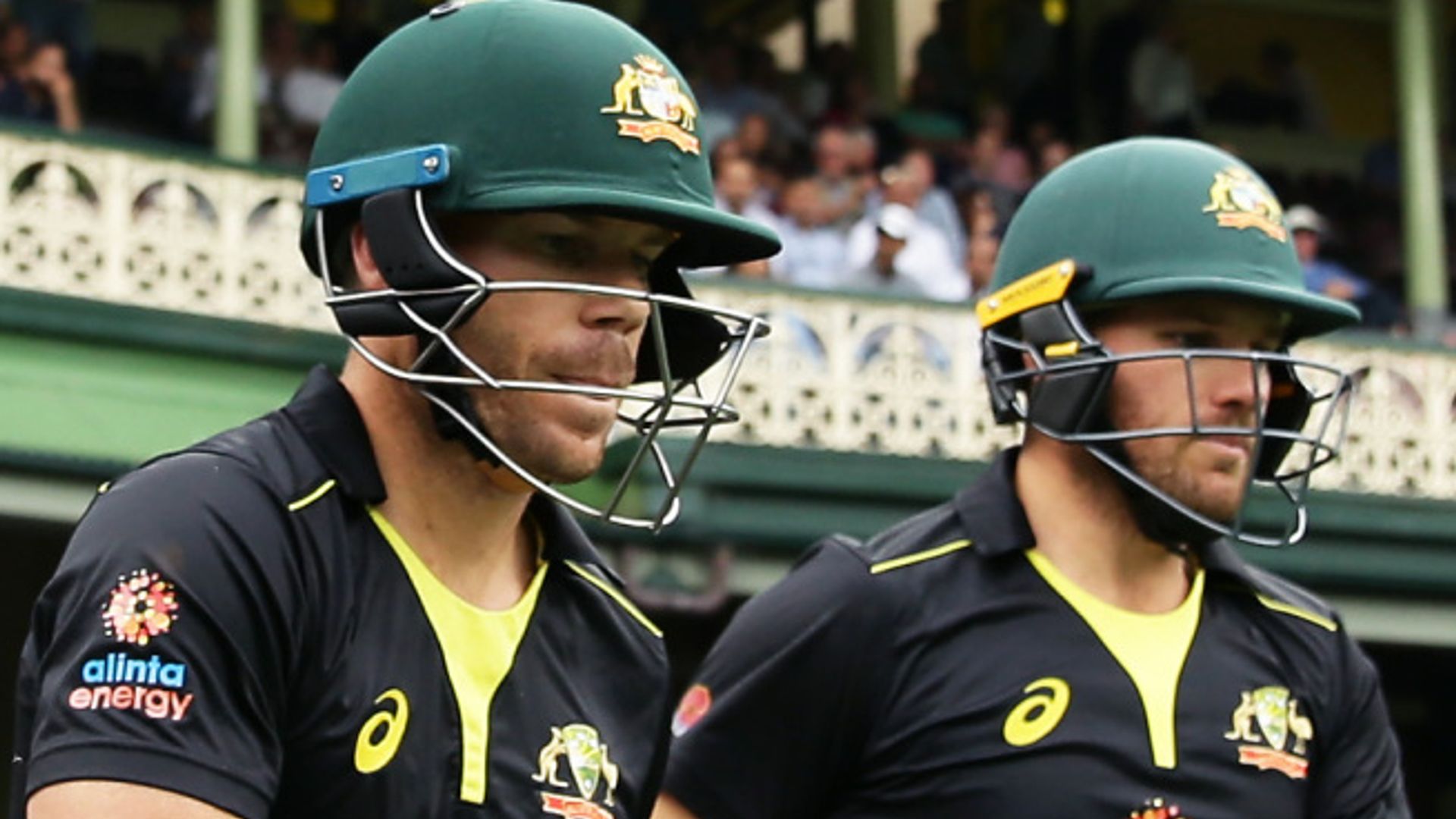 Aaron Finch and David Warner found some early form in Australia’s first intra-squad warm-up match before the game was abandoned due to rain.

The pair showed no signs of rustiness as they opened up for the Finch XI against the Pat Cummins XI, powering their way to 75 before Finch was out for 40 and Warner soon followed after stroking 42.

Young wicketkeeper Josh Philippe looked to lay down a marker in search of his first international cap. The 23-year-old was brought into the squad on the back of an impressive Big Bash campaign for the Sydney Sixers and hit an elegant 20 before being caught trying to flick the ball off the bowling of Marcus Stoinis.

Wickets fell at regular intervals in the second half of the innings and were shared among the bowlers, with Cummins choosing to rotate often.

The captain claimed two wickets himself as well as an athletic run-out from his own bowling, diving to his left to field the ball before hitting the stumps at the wicketkeeper’s end to run out Andrew Tye.

The innings ended on 150 all out after a flurry of late wickets from a promising 98-1 after 12 overs.

In reply, Matthew Wade powered the Cummins XI to 60-0 from 5.5 overs, hitting 36 off 18 balls, including three sixes in an over off the bowling of Tye, before bad weather intervened.

The tourists will face England in three T20s and as many one-day internationals between September 4 and 16, but selector George Bailey has challenged Australia’s World Cup hopefuls to look further into the future.

“It’s a funny little time in the schedule given the removal of the Champions Trophy, it’s a big break between World Cups, and so we’ve used the last couple of months to start to have a think around the strategy and philosophy that will hopefully hold us in good stead leading up to the World Cup in India in 2023, and we will start to slowly implement that.

“We’ve got and have had some guys who have played a lot of cricket at the top, but also through the middle and no doubt over the next couple of years, those guys will have opportunities to embed their spots, but there will also be opportunities for guys to come in and make their mark on the team and try to have it settled long before heading into that key tournament.”

Bailey says the tourists are delighted to be close to playing competitive cricket once again after the game’s shutdown because of the coronavirus pandemic.

He said: “Our guys are just absolutely pumped to be here and having the opportunity to play, not only as the competitive beast that sportsmen are, but they want to be out playing and the uncertainty of the last few months and not knowing what’s been ahead has been challenging.

“But I think also given (a) the rivalry that Australia and England have and (b) the success that England have had in white-ball cricket over the last few years, they’re a team that you have to be at your best against and it’s a great opportunity to show your wares as a team and individually.

“For all the challenges of coming out of a winter and not having played as much cricket as we would have, the fact that we’re actually playing cricket is fantastic and the boys are pretty pumped about that.”

There could also be an opportunity for a more familiar name, destructive batsman Glenn Maxwell, who is back among the fold after taking a break to manage his mental health.

Bailey said: “He’s such a dynamic player and with a skill set that he can manipulate at different stages of different games, so he’s a really important player.”