A matchup between Manny Pacquiao and Conor McGregor has been highly speculated ever since the Filipino senator signed a pact with Paradigm Sports Management, the company that also represents the Irishman UFC fighter.

Justin Fortune, Pacquiao’s longtime strength and conditioning coach, did not mince words in predicting how a match between the fighters would potentially play out.

“Why even make that guy rich?” Fortune told The Manila Times. “Why destroy your legacy for a bum like McGregor? Manny will destroy Conor McGregor inside three rounds. He will obliterate him. Too fast and too strong as an amazing fighter. McGregor is nothing. I mean, my God, this is boxing; we are boxers. McGregor is an MMA guy, and we can’t do MMA, and he can’t box. That’s very simple.

“And it won’t do absolutely nothing for Pacquiao as far as his legacy [is concerned]. Remember, this is just my opinion: Manny goes down as the greatest fighter in history when he finishes, because no one has done what he accomplished in boxing.” 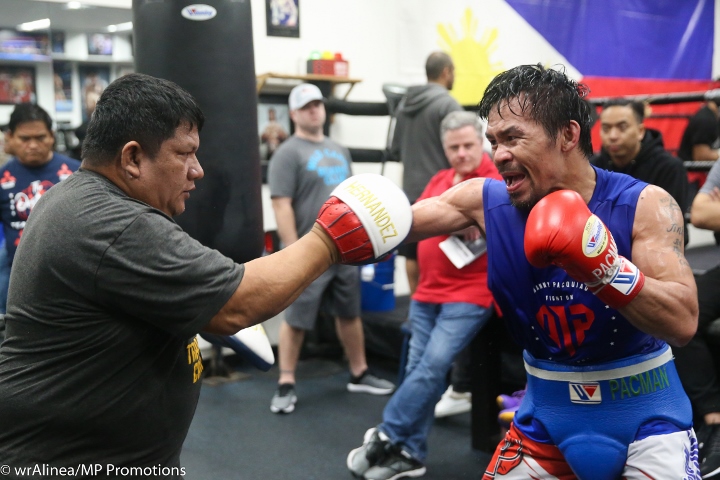 The 41-year-old Pacquiao (62-7-2, 39 KOs) has a laundry list of viable boxing foes who are lining out of the building calling him out and wanting to face him, including Terence Crawford, Mikey Garcia, Errol Spence Jr., Shawn Porter and Danny Garcia.

McGregor has also expressed consistent interest in moonlighting as a boxer ever since Floyd Mayweather Jr. knocked him out in his sweet science debut three years ago.

In January, the 32-year-old, former UFC two-division champion McGregor said talks had been ongoing with Pacquiao.

“For me, an aspiration of mine is to win a boxing world title. That would be a phenomenal feather in the cap and something I look to achieve and will achieve in the future,” said McGregor in January before he beat Donald Cerrone in a MMA match. “What a fight that would be against Manny — a small powerful southpaw. We would have to figure out the weight and those types of things, but it’s something that interests me, no doubt.”

McGregor said he’d love for the fight to be staged at Allegiant Stadium, the Raiders new home in Las Vegas. Shortly after knocking out Cerrone, McGregor announced his retirement from UFC, a position president Dana White has maintained.

In February, oddsmakers jumped on the potential crossover fight and released odds with Pacquiao as a -250 favorite, and McGregor as a +190 underdog.