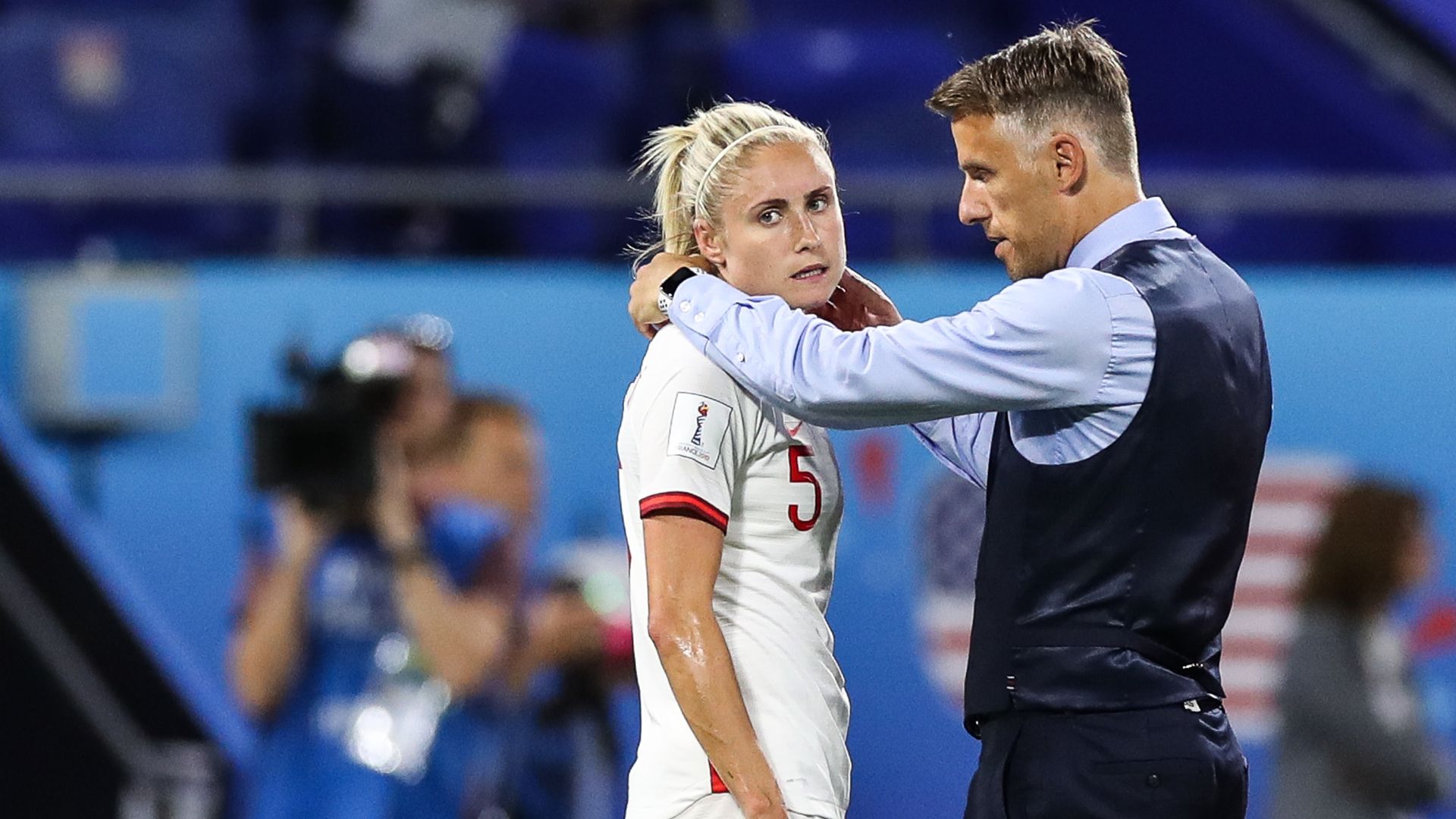 Steph Houghton admits it has been a “difficult period” as an England player, with Phil Neville leaving as head coach next year.

Neville will be replaced by Netherlands head coach Sarina Wiegman – but not until September 2021.

Houghton says that despite a tough few months, the Lionesses are fully focused on ending Neville’s reign in a positive manner.

“It’s been a difficult period. It’s been a bit confusing for us as players but, at the same time, at the moment Phil is still our boss and he’s our manager for the next year,” she said.

“We have a camp coming up in September and, as players, the only thing we can control is how well we train and how well we play, whether that’s in-house fixtures or fixtures against another nation.

“The last few games, we haven’t played as well as we should have and that’s not just down to us as players or Phil as a boss, that’s us as a team.

“Lockdown has allowed us to reflect on that and, us as players, over the next 12 months or whatever it might be, the focus is to perform well as a team together, to respect Phil and do as much as we can to get the results that this team deserves.”

This year’s Community Shield will feature the first-ever double-header with both men and women’s games to be played at Wembley Stadium on August 29.

The first game will feature Women’s Super League champions Chelsea and FA Cup holders Manchester City. This will be followed by the men’s game between Liverpool and Arsenal.

The women’s edition will return for the first time since 2008 when Arsenal defeated Everton 1-0, and Houghton has expressed her delight at being involved.

“I can’t wait. Wembley Stadium is such an iconic stadium in English football,” she said.

“It’s disappointing that the fans and our families can’t be there to support us because it’s such a good day out.

“At the same time, to have that opportunity to play the Community Shield against Chelsea, before Arsenal vs Liverpool, speaks volumes of how much we’re looking to push the game forward.

She added: “We haven’t had a Community Shield for a number of years in the WSL so it’s a chance for us to get our hands on a trophy.

“Against Chelsea, these games are always competitive and tough. It’s probably the perfect game to start the season and show what we’re about and what we’ve done over the last six weeks on the training pitch.”

Chelsea midfielder Fran Kirby shares Houghton’s delight at the prospect of playing at Wembley on Saturday, and predicts an entertaining game between two of the WSL’s best sides.

“Both teams will be all guns blazing. I think there’s probably a bit of disappointment on their behalf, I think we’d be the same if it was the other way round. It definitely gives them the motivation to beat us at Wembley,” she said.

“For us, we want it just as much as they do. I think it’ll be an intense and exciting game, and a interesting game to see where both teams are at after pre-season.”

“We want to be playing in the best and biggest stadiums. It’s a massive incentive from the FA to say that they’re going to do this together,” added Kirby.

“It’s not the case of the women being on one day and the men being on the other, they want to do it together and push it forward.”

The game at Wembley could be Kirby’s first competitive game back in nine months after she fell ill with pericarditis – an inflammation of the fluid-filled sac around the heart – and even revealed she came close to retiring.

The 26-year-old said it’s been a tough time, but is excited to get back on the pitch.

“The last few months have been a difficult journey for me. It’s one I’ve taken to allow time for myself, time to focus on what I want to achieve and how I am as a person.

“As much as it was a really negative part of my life, I’ve tried to see the positive and come out the other side. I’m feeling really happy and excited.”