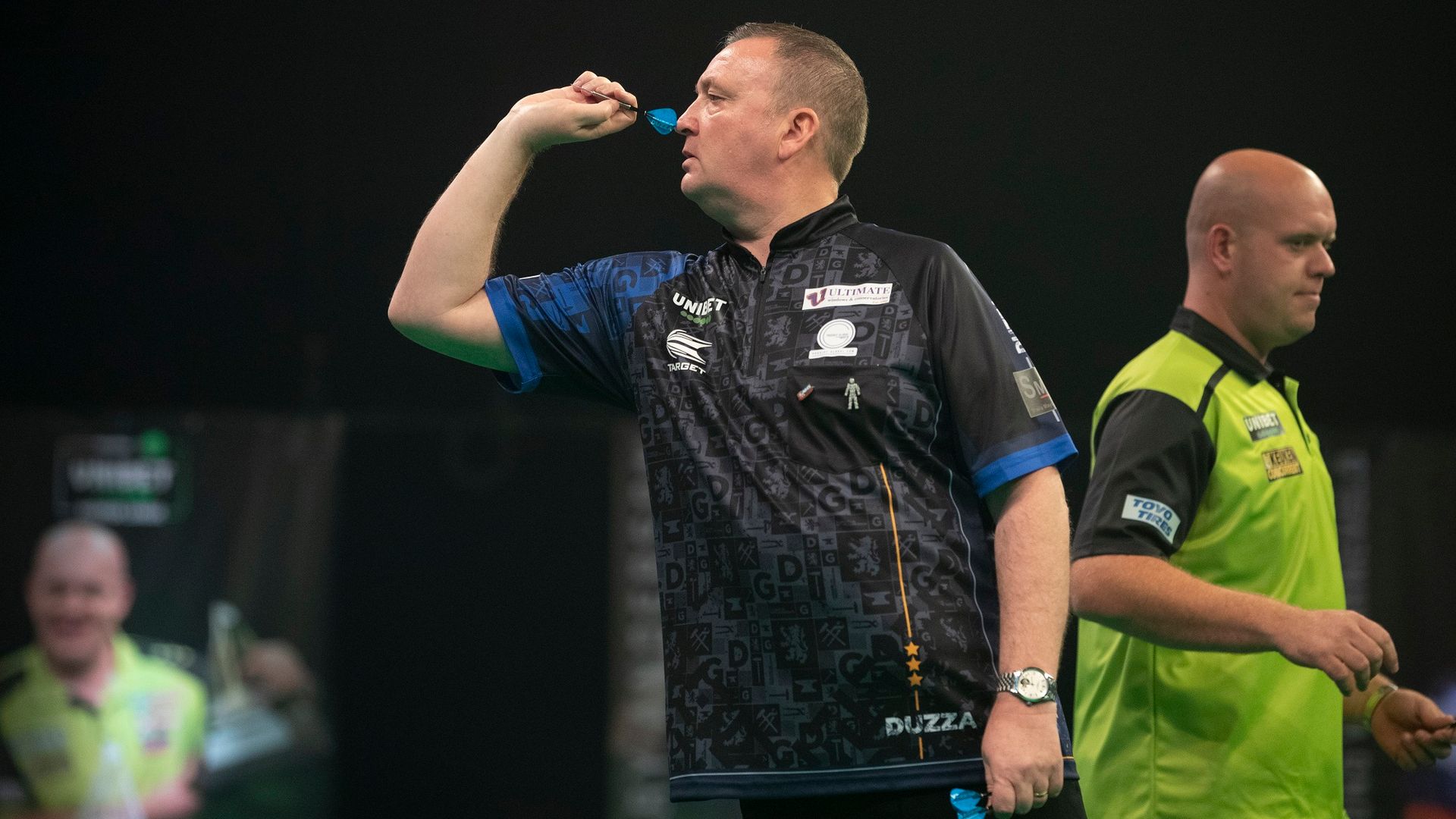 “I’ve worked hard all my life, from local league darts, right to the top of the Premier League now. Just give me a little bit of respect”

Glen Durrant believes he deserves more respect for his performances after regaining top spot in the Premier League table with a stunning 7-3 victory over world No 1 Michael van Gerwen.

Van Gerwen leapfrogged Durrant via legs difference on Night Seven after the three-time BDO world champion was forced to settle for a share of the spoils against world champion Peter Wright.

‘The Green Machine’ stoked the fire ahead of his clash with the Teessider by labelling him a ‘boring’ player who ‘sucks the energy out of you’, but Durrant produced a magnificent display to silence the defending Premier League champion.

The opening four legs of the contest went with throw, before ‘Duzza’ landed the first decisive blow – converting a majestic 167 checkout on the bull in leg five.

The Middlesbrough man reeled off five consecutive legs to establish a commanding 6-2 cushion and eventually wrapped up an emphatic win with a 104.43 average to move two points clear at the summit, ahead of his clash against Rob Cross on Judgement Night.

Durrant had won his previous two meetings against MVG – including a showdown at last year’s World Matchplay – and after making it three from three, he compared his methodical approach to three-time world snooker champion Mark Selby.

“I hope Mark Selby is watching, my hero! That was a bit like Ronnie O’Sullivan against Mark,” Durrant told Sky Sports in his post-match interview.

“I know where my game is, I know I’m a boring player to watch but I’m not a bad player sometimes and that’s a big, big win. I can play darts. I’m a three-time BDO world champion but to be in the Premier League is pretty amazing.

“You’re playing the elite players week in, week out and it’s special. Tonight I have just beaten the best player in the world. That’s amazing.

“I’m a huge fan of Michael van Gerwen. I’ll go on record now live on Sky – he’s the best player in the world. I was quite honoured that he was talking about my style of play.”

Durrant has made a huge impression since crossing the darting divide in January 2019 and although he is yet to win a major PDC title, he has reached four televised semi-finals and is closing in on a place in the world’s top 10.

His clinical combination finishing has been the catalyst for his success in his debut Premier League season and the 49-year-old believes while he may lack the fluency and star quality of his rivals, he belongs among the world’s elite.

“I’m not as good as Michael Smith, Nathan Aspinall, Michael [van Gerwen] with the speed. I don’t have their natural ability, but what I’ve got is tenacity, hard-work and I’m good in match play, and tonight was right at the top of my game.

“The respect was always about – I won three BDO world titles, I came to the PDC. If I had bombed, what would those titles have meant?

“I feel I’m right up there in the top 10 players in the world. Just being backstage with them is great and I feel like I’m only going to get better. I might be 50 this year but I’m definitely at the top of my game.”

Durrant is currently the only player in the PDC to boast a 100 per cent record against Van Gerwen over the course of three games, and he is bidding to deny MVG top spot in the league phase for the first time since the Dutchman featured in the competition back in 2013.

Only Phil Taylor and Van Gerwen have topped the overall league phase since the tournament’s inception in 2005 and Durrant believes he deserves the same level of respect he offers his darting colleagues.

“I just know that he [Van Gerwen] is a rhythm player and I’m going to put off Michael Smith and Michael van Gerwen because they’re not going to be at the board every two seconds.

Don’t miss a dart as the Premier League reaches it conclusion on Sky Sports – the action continues through to Sunday August 30, and resumes again on Wednesday September 2