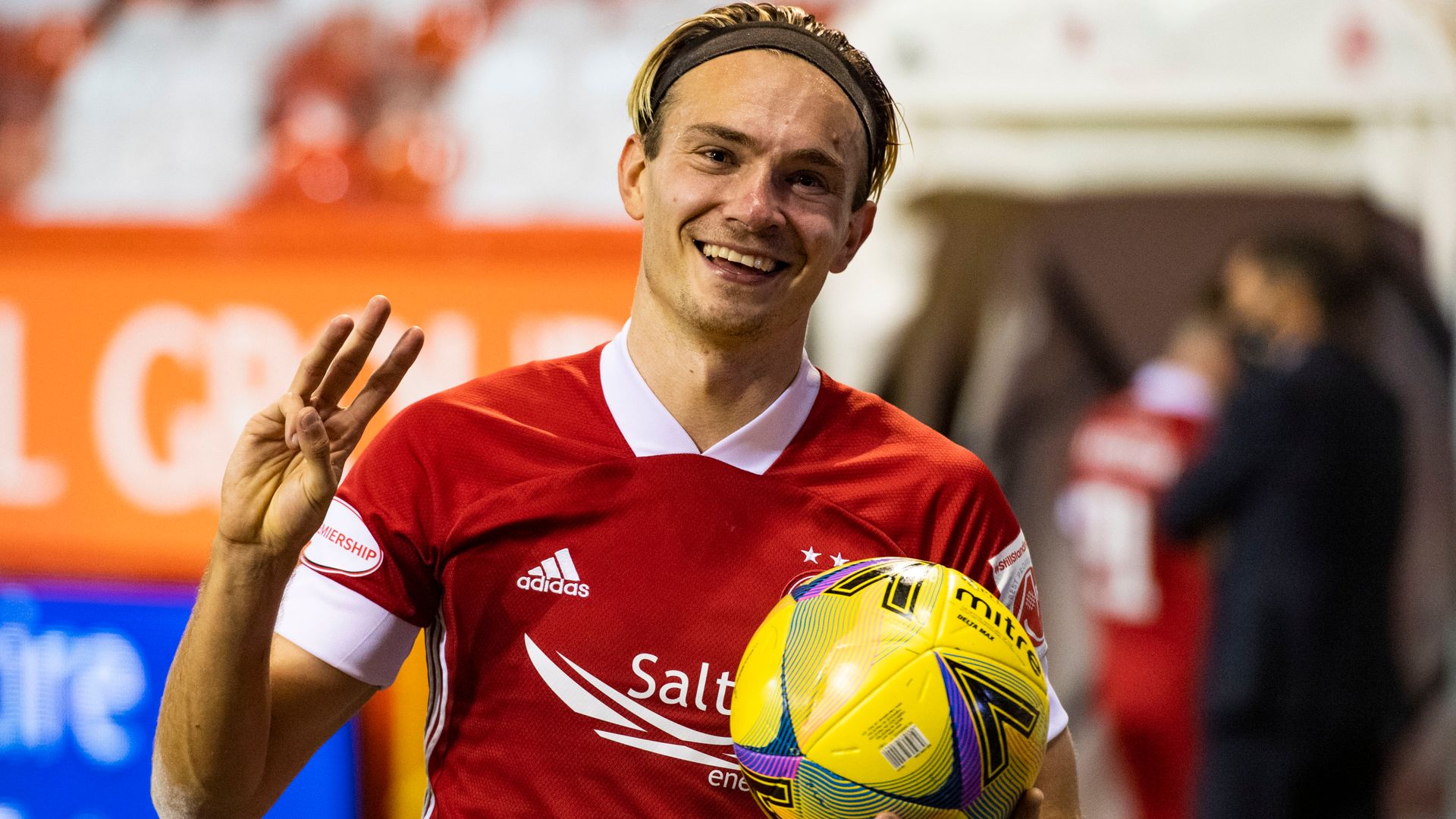 Substitute Ryan Hedges bagged a second-half hat-trick as Aberdeen sealed their place in the Europa League second qualifying round with an emphatic 6-0 win over Faroese side NSI Runavik.

Lewis Ferguson’s header and a close-range finish from Curtis Main had the Dons 2-0 up at the interval and Hedges added two more in the opening 15 minutes of the second half before Jonny Hayes struck a stunning fifth.

Hedges completed his hat-trick from the penalty spot in the dying stages of the game as the Dons romped home ahead of their trip to Hibernian in the Scottish Premiership on Sunday.

Aberdeen survived an early injury scare after Scott Wright took a knock to the wrist in the opening minutes, but he was able to continue and would go on to impress.

Indeed, he and Main had the first two openings, and the pair would combine on the half-hour mark with only a good block from Runavik defender Johan Davidsen preventing Main opening the scoring.

However, the deadlock would soon be broken. Andrew Considine was the provider with a neat chipped cross from the left which Lewis Ferguson met six yards out to head past Tordur Thomsen.

The lead was doubled six minutes later as Wright spun his man on the right before sending in a teasing ball across goal that was missed by Marley Watkins at the near post but turned home from close range by Main at the back.

Hedges replaced Main at the interval and was immediately involved in the action, creating a chance for Dylan McGeouch in the first minute of the second period, but it was Hedges himself who was on hand to prod home after Thomsen spilled a Hayes cross and the ball came off defender Rogvi Nielsen.

Wright was the provider when Hedges made it 4-0 just before the hour, turning the ball back from the centre of the penalty area for the Welshman to drill a left-footed strike home from 18 yards.

That was a good finish, but he was outdone by Hayes, who lashed high into the net from the edge of the area after Matty Kennedy was crowded out.

The match went into a bit of a lull as a number of substitutions broke up the flow of the game, but Hedges completed his hat-trick from the penalty spot after Ferguson had been fouled by Nielsen, four minutes from the end of normal time.

Callum Lang and Stephen O’Donnell scored their first Motherwell goals as Stephen Robinson’s side overcame some nervous moments to beat 10-man Glentoran 5-1 in the Europa League.

The Belfast side gave as good as they got before losing Seanan Clucas to a 52nd-minute red card and then missed two excellent chances to open the scoring at Fir Park.

But O’Donnell set up Lang to net in the 58th minute and the Scotland full-back sparked a goal spree with a thunderous long-range strike in the 72nd minute.

Liam Polworth and Tony Watt both scored from rebounds in the subsequent six minutes to subject Glentoran to a harsh scoreline and put Motherwell into the second qualifying round.

Christopher Long added to Glentoran’s misery before Robbie McDaid netted a consolation from the spot.

Hours before kick-off, Motherwell sold their most impressive player in a slow start to the season, David Turnbull, in a potential £3.25million deal to Celtic.

They had a ready-made replacement in Polworth, who had a successful debut campaign while Turnbull was recovering from knee surgery.

Robinson made a tactical switch after derby defeat by Hamilton left them with two points and two goals from five Scottish Premiership games.

The former Northern Ireland international moved to a 3-5-2 formation with Liam Grimshaw brought in at wing-back and Long earning a recall to start up front with Callum Lang.

The visitors included former Well midfielder Gael Bigirimana and they forced some early corners before Long came close on the break.

The striker then forced the first save when his deflected volley was well-stopped by Gibraltar goalkeeper Dayle Coleing following Polworth’s corner.

The visitors were rewarded for their enterprise with a number of chances. Marcus Kane had a shot saved following a poor defensive header from Declan Gallagher, Paul O’Neill’s deflected effort spun wide with Trevor Carson wrong-footed, and the Northern Ireland goalkeeper made a brilliant save to keep out Rory Donnelly’s close-range diving header.

Motherwell were being limited to half-chances with O’Donnell, Long and Allan Campbell being denied and the hosts had another let-off before the break when Clucas shot wide after Grimshaw had lost possession.

Clucas had earlier been booked for a full-blooded sliding tackle on Ricki Lamie and he was off after another poor challenge on O’Donnell.

The 10 men soon had two good chances. Christopher Gallagher beat Grimshaw to the ball and delivered a low cross which Paul O’Neill fired over from six yards. McDaid then sent a free header just wide from Bigirimana’s corner.

Motherwell soon calmed the nerves of Robinson and their absent fans. Lang pounced on a loose ball and exchanged passes with O’Donnell before beating the keeper with a deft touch.

Robinson brought on winger Sherwin Seedorf for the struggling Grimshaw in a change devised before the opener and the game opened up.

O’Donnell fired into the roof of the net from 30 yards before Polworth nodded home three minutes later after Long’s effort had been parried.

Watt then tapped home following Campbell’s blocked shot and Lamie hit the bar from long range before Long headed his first goal of the season from Watt’s cross in the 87th minute.

The visitors got off the mark in stoppage-time when McDaid converted a penalty after sub Harry Robinson’s foul.

Aberdeen travel to face Hibernian on Sunday live on Sky Sports Football; coverage starts at 4pm and kick-off is at 4.30pm. Meanwhile, Motherwell travel to face Celtic at 3pm on Sunday.

The draw for the Europa League third qualifying round takes place on Tuesday, where Aberdeen and Motherwell may be joined by Celtic in the hat.

But the Scottish champions could be one of two teams out of the ten Champions League second qualifying round losers who receive a bye into the play-off round of the Europa League.