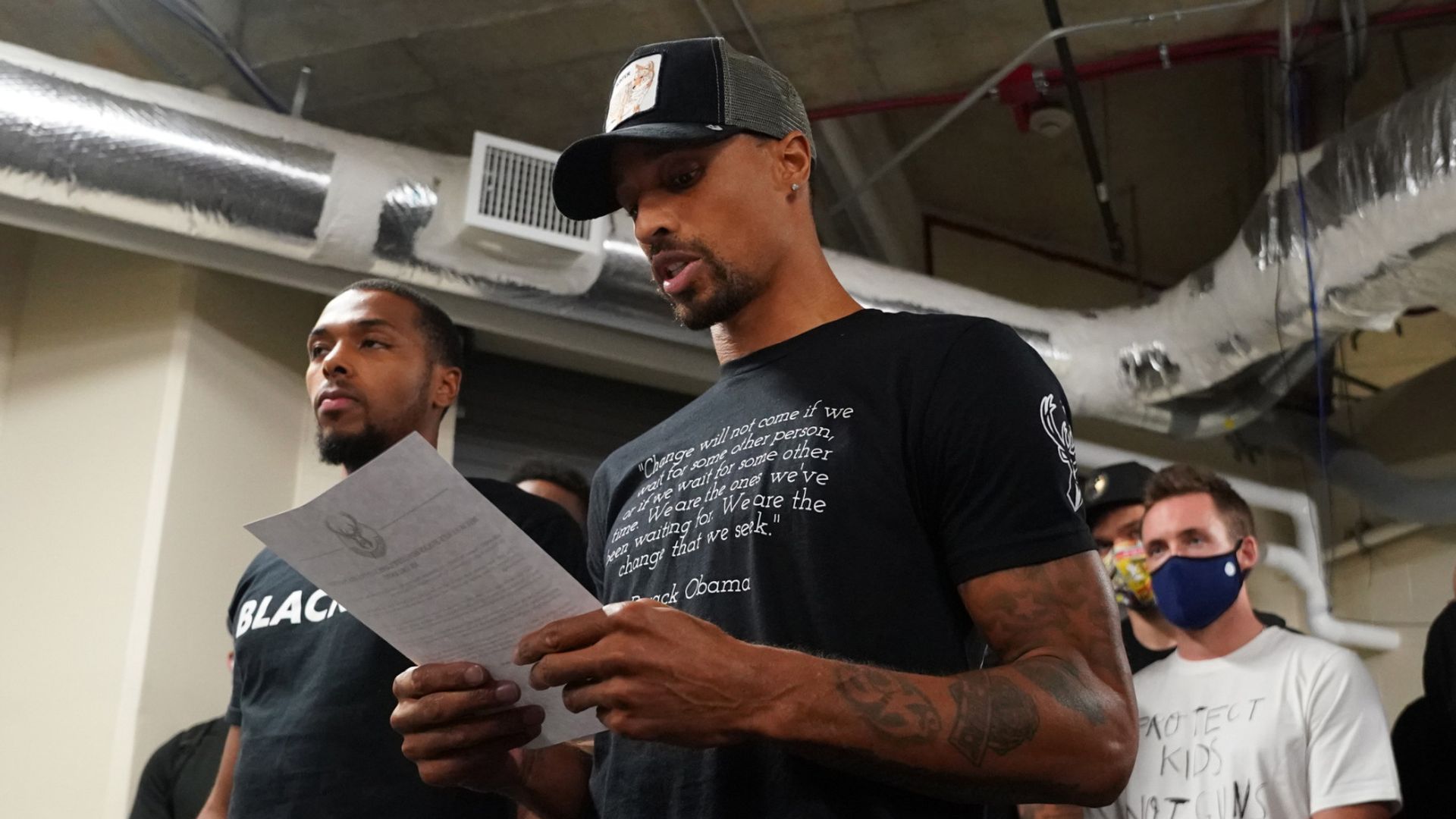 The Milwaukee Bucks’ decision to boycott their first-round playoff game in protest over the police shooting of Jacob Blake has sent shockwaves through the sports world.

Two-and-a-half hours before the scheduled tip-off of Game 5 of the Milwaukee Bucks’ first-round playoff series with the Orlando Magic on Wednesday, Giannis Antetokounmpo left the locker room in practice gear and walked toward the court inside the main arena at the NBA restart. He wore a serious game face, which was unusual, but it was a hint.

A few minutes later, the reigning MVP made a U-turn, without pregame workout sweat, the first sign that something was up. He was joined by Khris Middleton, and when those All-Stars returned inside the locker room, they did not emerge again for five hours, well after they and their team-mates shook the NBA and the sports world.

The 2019-20 Milwaukee Bucks may eventually win this year’s championship, assuming it will be played. And if they do, they may not generate the same level of spirited national conversation and rousing applause in some circles than they just did – by refusing to play a No 8 seed in a playoff game.

Stung by the police shooting of Jacob Blake, an unarmed black man in Kenosha, Wisconsin, just 40 minutes south of Milwaukee, and disturbed by what they felt was a sluggish response from authorities to find justice, the Bucks chose to take a unified stand by taking a unified seat.

They knew the historical significance of that; no professional sports team ever refused to play a game because of social injustice, not even in the 1960s. Black players on the Celtics in 1961, including Bill Russell, did skip an exhibition game in Lexington, Kentucky, after they were refused service at a local restaurant. However, the team did play that night, with seven players.

I’m moved by all the @NBA players for standing up for what is right. To my man @TheJetOnTNT I would like to say Thank you for what you did to show your support for the players. I am so proud of you. Keep getting in good trouble. @NBAonTNT @ESPNNBA @espn #NBAPlayoffs ✊🏿

Russell was a trailblazer during that turbulent time in America. He never refused to play during the Civil Rights era but did praise the Bucks, through social media: ‘I’m moved by all the NBA players for standing up for what is right.”

The Bucks spoke with Wisconsin government officials during their lengthy locker room meeting, and in particular the state attorney general, in order to get answers and suggestions on how to force immediate change.

While that took place, the dominoes pushed by the Bucks fell quickly beyond the locker room on a whirly night. Two other playoff games on Wednesday night were scrapped and player support both inside the bubble and beyond Orlando was thermal for the Bucks, Magic, Lakers, Blazers, Thunder and Rockets – all of who were all scheduled to play.

They were joined by the player’s union, NBA coaches, team owners, even some of the sponsors with paid ads on the cancelled telecasts, and that was just among league circles. This became bigger than the Bucks.

Other sports leagues then fell in line with the ripple: WNBA, Major Lague Baseball, Major League Soccer and tennis, all seeing game cancellations or some manner of player protest.

The engineers of the Bucks’ internal movement were George Hill, who just days earlier expressed second thoughts about coming to Orlando, and Sterling Brown, whose lawsuit against the Milwaukee police department is still ongoing, stemming from an arrest gone foul a few years ago. Those players read from a release, flanked by team-mates, and took no questions.

From the statement, Hill said: “When we take the court and represent Milwaukee and Wisconsin, we are expected to play at a high level, give maximum effort and hold each other accountable. We hold ourselves to that standard, and in this moment, we are demanding the same from our lawmakers and law enforcement. We are calling for justice for Jacob Blake and demand the officers be held accountable. For this to occur, it is imperative for the Wisconsin State Legislature to reconvene after months of inaction and take up meaningful measures to address issues of police accountability, brutality and criminal justice reform.”

The Bucks wanted to rattle society and poke those holding high office in Kenosha and crank the decibel level on social justice and this was certainly accomplished. And now, as in all matters of protest, there is a necessary transition and a bold question that asks: What next?

The Bucks said they were not emotionally ready to play. Brown read, from the statement: “Despite the overwhelming plea for change, there has been no action, so our focus today cannot be on basketball.”

If the NBA players need action from Kenosha in order to refocus on basketball, and since action is hardly moments away, does this and should this spell the end of the NBA playoffs? How can players, taking them at their word, suddenly shift gears and lace up a day or two from now? What exactly will change dramatically in Kenosha and Minneapolis and from coast to coast in the interim?

The NBA termed what happened Wednesday as a “postponement”, which by definition is a delay. Which means the league expects the playoffs to continue, which would put it at odds with any players who’d rather go home.

A collection of heavyweights and union reps, LeBron James and Chris Paul among them, met through the night on Wednesday. An emergency session of the Board of Governors is set for Thursday at 11am (4pm UK time), which promises to be a defining moment to see who wants and gets what, since the players are bringing financial and political demands.

It’s all very fluid. At stake: Millions of TV revenue and the conclusion of the 2020 season, if the players and league are still putting any high value on that.

The league would be caught in friendly crossfire from a business standpoint. Players and owners are rarely at odds in the NBA, the most progressive sports league in America, and in the case of social justice, the bond between them is tight. Everyone’s on the same page, same book, same message. The league openly encouraged players and coaches to speak up on political and social issues well before 2020, and once cancelled an All-Star Game in Charlotte in protest of a controversial North Carolina bathroom bill aimed at denying gay and transgender citizens.

Also, the NBA threw its weight behind social justice in Orlando by allowing players to wear messages on their jerseys and painting Black Lives Matter on the court and relaxing the rule requiring players to stand for the anthem. No pro sports league can match this awareness level. But in the days following the Kenosha shooting, some players wondered if this was loud enough, and that they felt stifled in Orlando, where they are unable to leave for health reasons until they are eliminated from the playoffs.

Those players wanted to take a more hands-on approach to social justice. That’s tricky because a pandemic still rages, limiting movement beyond their homes even if this restart never happened. Anyway, being in Orlando allows them a nightly and massive platform they would not enjoy on the outside except for LeBron and a handful of other stars with high appeal.

Skipping a basketball game, in and of itself, will not stop police shootings, just as many other like-minded events in 2020 failed to do so; otherwise, Kenosha would not have happened.

That said, in the fight for social justice, every action and step does matter if it rousts big business and influential people and voters and political decision-makers. The Bucks evidently believe this is that step, that in any marathon to produce change, they just covered a measurable amount of ground with a bandwagon they hope is filling up.

The team that just scored big points in Orlando will let America sort that out. Wearing black T-shirts adorned with quotations and messages and statements, all the Bucks players, flanked by coaches and support staff, refused to shut up and dribble.

Hill even apologised for the long locker room delay, saying: “We thought it was best for us as a team to brainstorm a little bit, educate ourselves and not rush into having raw emotions.”

“We’ll go back to educating ourselves and see what’s going on.”