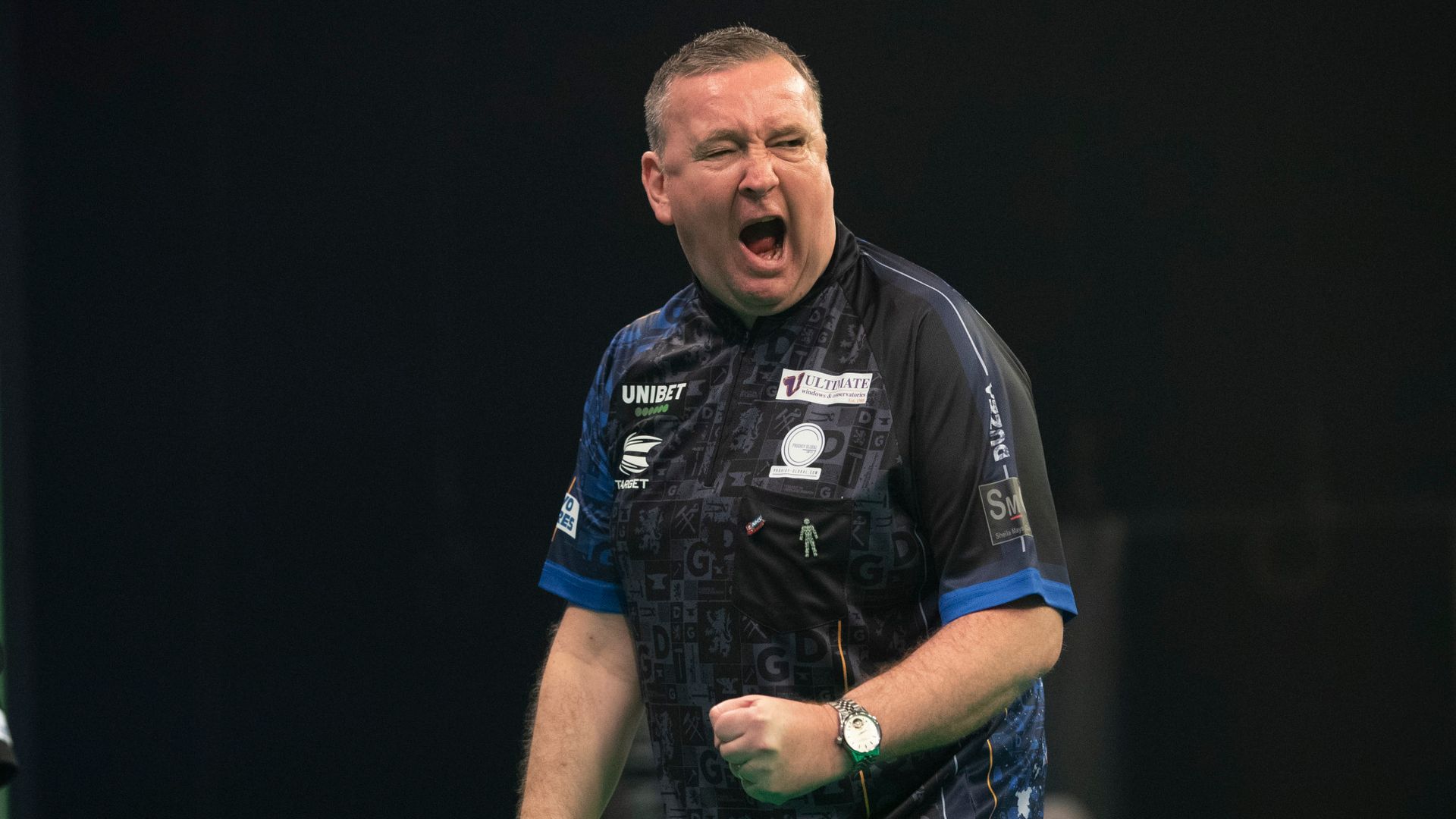 Coverage of the Premier League continues on Thursday night when one player will be eliminated – join us from 6.30pm on Sky Sports Action

Glen Durrant and Michael van Gerwen spent the build-up making no secret of their animosity to each other, but on the oche it was Durrant who prevailed to reclaim top spot in the Premier League.

‘Duzza’ and Van Gerwen had traded choice words after Tuesday’s action, but it was three-time BDO world champion Durrant who had the last laugh, claiming a brilliant 7-3 victory that took him two points clear of the Dutchman at the top of the table.

While the race for top spot and play-off places hots up, it is the battle to avoid elimination that will take the headlines on Thursday and, with three players within two points of each other at the bottom of the table, it promises to be a thrilling evening.

Daryl Gurney picked up a crucial victory against Nathan Aspinall that ensured his destiny remains in his own hands, while last year’s runner-up Rob Cross is left needing favours, with Gerwyn Price the other player in the mix for relegation.

‘Voltage’ slipped to the foot of the table after a defeat to Michael Smith, while Price produced a brilliant display to beat Gary Anderson with a dominant victory that means he needs just a point against Jermaine Wattimena.

Van Gerwen has been untouchable at the top of the Premier League table for nearly 10 years, but the Dutchman has a contest on his hands if he is to win the league phase for an eighth successive year after Durrant’s 7-3 victory.

MVG had pinched top spot with a win on Tuesday, compared to Duzza’s draw, and, after words had been exchanged, Durrant let his darts do the talking with a 104 average and a typically clinical display of finishing.

A pair of 15-dart holds saw the opening two legs shared, before a couple of classy combination finishes ensured the next two went the same way.

With the match all-square at 2-2, Durrant went up a gear, taking out a brilliant 167 finish on the bullseye for a break of throw and the lead.

When MVG missed two darts to level, Duzza pinned double-top with his last dart in hand to move two legs clear, and two became three when he pinned double 12 for another break of throw.

Durrant ensured a share of the spoils with a fourth leg on the bounce and, while Van Gerwen stopped the rot, the Englishman was not to be denied

The two world champions have built- up something of a rivalry since Duzza’s switch to the PDC last summer – but it is the man with three BDO world titles to his name who has the upper hand, now winning all three meetings between the pair.

Daryl Gurney entered the Premier League return rock bottom and without a win, but he claimed a second victory in two days to edge out Nathan Aspinall 7-5 in a thriller.

Aspinall fired in five 180s and averaged 103 but it was not enough as ‘Superchin’ took almost every chance that came his way to move off the foot of the table.

After three legs without a maximum, the pair traded 180s as the contest caught fire in the fourth leg, Gurney’s brilliant 144 drawing him level as the first four legs were split.

Three missed darts at double from The Asp allowed Gurney to pinch the seventh for the first break of throw which he consolidated with double six to move within a leg of a precious point.

However, he made it two points for a second successive evening by winning two of the next four to make it a maximum return to action and a climb upwards.

The last two beaten finalists met in the third match of the night, but both are on very different paths this year after Michael Smith handed Rob Cross a fourth defeat in six matches, prevailing 7-3.

A 12-dart break of throw gave 2018 runner-up Smith the opener, which he consolidated on his way to an early 3-0 advantage.

However, somehow Cross, beaten in last year’s Premier League final, found a way back. Having grabbed the first leg, he took out a brilliant 143 to break throw and then punished Bully Boy’s troubles on the double to level at 3-3.

But that was as good as it got as Smith avoided being dragged into a surprise relegation battle with four legs on the bounce to sprint across the finish line and end a run of six successive defeats to the 2018 world champion.

It means Cross goes into Judgement Night needing to get at least a point against Durrant, but more realistically a win against the Premier League leader, if he is to have any chance of avoiding relegation.

Having slumped to within a point of rock bottom after defeat in Tuesday’s resumption, Gerwyn Price delivered an emphatic response with a 7-1 hammering of two-time Premier League champion Gary Anderson.

The Scot had been near flawless in beating Smith in his first game back, but he missed a host of darts at double on his way to picking up just a solitary leg.

Price started fast and claimed the first four legs with an average in excess of 100 and a couple of breaks of throw that left Anderson playing catch-up early on.

‘The Flying Scotsman’ stopped the rot with a classy 116 finish, but that was his only successful dart at a double, as Price got his push for the top four back on track to win the next three and move within a point of a vanquished Anderson.

Peter Wright has gone about his Premier League campaign with the minimum of fuss, and he did so again with a comprehensive 7-1 win over the latest Challenger, Jeffrey de Zwaan.

De Zwaan was beaten last year in Rotterdam and he arrived to the Milton Keynes stage decked out in orange, as was Wright, and the pair shared the first two legs before Wright showed his class.

A brilliant 130 finish from ‘Snakebite’ proved a crucial break of throw that gave Wright a 3-1 advantage and when De Zwaan missed a three-figure finish, the world champion pounced with a classy 93 finish.

Remarkably Wright has only once finished in the top four, but he completed a comprehensive victory with three quickfire legs for a dominant win that takes him into the play-off places for the first time this year.

Don’t miss a dart as the Premier League reaches it conclusion on Sky Sports – the action continues through to Sunday August 30, and resumes again on Wednesday September 2