Otto Wallin wants to be as active as possible now that he has ended another long layoff.

Fresh off a fifth-round technical knockout of Travis Kauffman, the Swedish southpaw hopes to fight again before the end of 2020. That type of activity would be refreshingly different from what Wallin has experienced over the past two years.

Before beating Kauffman on Saturday night, a foot injury and the COVID-19 pandemic helped keep Wallin out of the ring for 11 months. The heavyweight contender hadn’t boxed since testing Tyson Fury in a 12-rounder he lost by unanimous decision last September 14 at T-Mobile Arena in Las Vegas.

The 29-year-old Wallin (21-1, 14 KOs, 1 NC) entered the Fury fight having competed in less than one round during the previous 16 months. His prior appearance resulted in a no-contest because Nick Kisner suffered a prohibitive cut in the first round of their April 2019 bout at Boardwalk Hall in Atlantic City, New Jersey.

“First, I wanna go back to New York and relax a little bit,” Wallin, a Manhattan resident, said during a post-fight press conference. “It’s been a year of training since I fought Fury, so I’ve gotta enjoy myself a little bit, and then get back to training. And hopefully, I can get back [in the ring] before the end of the year, because it’s very important to stay busy now. Because before Fury, I had only fought one round in 18 months. And then I fought Fury. Now, it’s been another year. So, I’ve got five rounds here, a good fight, and I wanna be back soon again, so I can stay busy. That’s most important for me.” 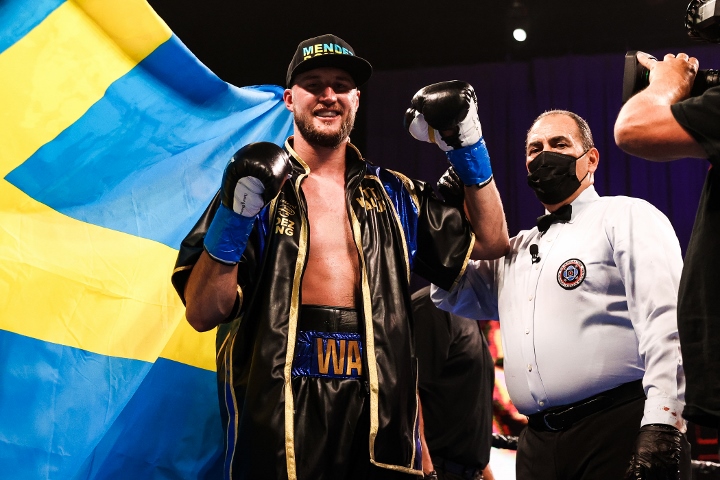 Wallin was having his way with Kauffman before Kauffman’s surgically repaired left shoulder gave out on him during the fifth round of a scheduled 10-rounder at Mohegan Sun Arena in Uncasville, Connecticut.

Kauffman turned away from Wallin at one point due to the pain. Referee Michael Ortega understandably stopped their fight at 2:32 of the fifth round.

“I felt like after two or three rounds, he was slowing down,” said Wallin, who was ahead by scores of 40-36, 40-36 and 39-37. “And I felt like the danger was over and I could pretty much stay in front of him and pick him apart. So, I felt that he was breathing [heavily] and I felt like I was landing some good body shots, and I was gonna keep going to the body. So, I felt, more or less, it was a matter of time. I think I would’ve stopped him anyways, yeah.”

Kauffman (32-4, 23 KOs, 1 NC), who’ll turn 35 on Friday, announced his retirement after suffering what was a second straight TKO defeat for the Reading, Pennsylvania, native.

“I wanna say happy retirement,” Wallin said. “I mean, he’s been a tough guy. He fought some good guys, and he always put up fun fights. When I was studying him for this fight, it was always fun fights to watch. You know, him and [Chris] Arreola, and [Scott] Alexander, Luis Ortiz. I know he’s a father of quite a few kids, so I’m happy that he’s all right, except from his shoulder. So, happy retirement to him and all the respect.”

Though Wallin wants to return prior to the end of this year, he doesn’t have a specific opponent in mind.

“I have no idea,” Wallin said. “I haven’t thought further than this fight right now. And I know Fury and [Anthony] Joshua, they’ve got fights already, and they’re gonna be tied up for a while, so I’m not sure.”

A Look At Daniel Jacobs’ Options Beyond Gabe Rosado Fight, End Of His DAZN Deal