The move ends the decorated amateur chapter of Browne’s career who was listed at #4 on Ireland’s amateur pound for pound list.  Browne represented Ireland internationally, medaling at The Chemistry Cup (World Cup), the Eindhoven Box Cup and a slew of several Irish National Titles.

While Browne who will be campaigning at super middleweight, has had no shortage of professional experience having sparred around the world with some of the best to do it, including Chris Eubank Jr., in his preparation for his bout against James DeGale.

Browne currently trains with Steven O’ Rourke in Inchicore alongside his now stablemate, Ryan O’Rourke.  Browne is managed by Conor Slater of Slater Consulting.  Browne will look to make his pro-debut closer to home in the coming months, with a fight date likely to be revealed in the coming weeks.

Joe DeGuardia of Star Boxing commented, “It is great to welcome Tony to the team. He is one of the most exciting amateurs in world boxing and his pedigree speaks for itself.  We believe he is well suited to the pro game and I look forward to seeing him progress.”

Tony Browne added, “I’m delighted to have finally turned pro. This has been a dream of mine for a very long time, and this opportunity that has presented itself is one I had to grab with both hands.  People have always said I’m suited for the pro game, so I’m raring to show that I am.  A big thanks to my team Steven and Conor and of course to Joe and everyone at Star Boxing for this amazing opportunity.  I’m looking forward to getting started.  I haven’t turned pro just to make up the numbers or to win just a couple of belts, I want to be world champion and leave a legacy.  That’s my goal.” 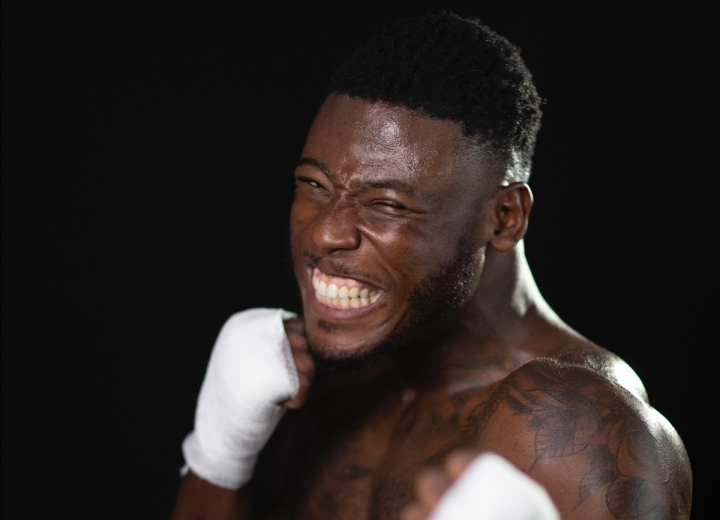 The skilled and sturdy 6ft 2in Brixton boy spent his early years trapped in the gang-infested, gun, knife and drug riddled Loughborough and Angell Town estates of London SW9 – a red zone on the Met Police’s Gang Matrix – where, too often, the elderly outlive the young.

Isaac Chamberlain, 26-years-old, claims that only boxing rescued him from a cell or a cemetery so is now committed to using his profile as a stand out athlete to rescue troubled youngsters as an ambassador for the ‘Gloves Up, Knives Down’ initiative.

‘Just because you grew up in the ‘hood, doesn’t mean you want to end up there,’ philosophises ‘IC’ who returns to duty following a frustrating 22 month hiatus in an eight rounder on new manager-promoter Mick Hennessy’s Channel 5 show live next Saturday (22nd August) at a TV studio in Redditch.

‘The boxing gym saved me, helped me forget. You drift in and out of street life – you instinctively follow what your friends are doing and street life was always part of that – but thankfully I was never too heavily involved.

‘Those streets definitely toughened me mentally for life as a pro fighter I guess but the streets are nothing compared to the discipline that’s needed to succeed against another trained fighter inside the ring. That brings another level of respect entirely.

‘‘Gloves Up, Knives Down is something very dear to me. I give talks, visit schools, and preach that nothing positive ever came out of ‘road life’. The streets bring easy money. Drugs and guns are the easy way. Any mug can pull a trigger, far harder to challenge your skills and character against another trained man. The discipline needed to be a successful boxer is a far harder but far more rewarding road.’

Chamberlain might rue the harsh hand that fate dealt him in his early years but those sinister south London streets certainly instilled an inner steel that has been a constant throughout his stop-start paid career.

‘In just my fifth fight, I broke my rib against Russ Henshaw (then 6-0) but dug in to stop him in round six,’ recalls ‘Chambo’ who has yielded just once in a five year 11 bout pro career.

‘After that, I fought with a dislocated shoulder from round three against Wadi Camacho but went 10 very hard rounds to win the Southern Area in only my sixth fight. I was only 22 at the time fighting big, fully grown men.’

‘My last win over (ex Commonwealth king) Luke Watkins was a weird one cos I actually thought I was well in front, cruising, and only pressed for the knock out to entertain the crowd, rather than salvage the fight. (A last round knockdown saw ‘Chambo’ edge a 95-94 verdict). I was amazed to discover the win depended on that knockdown. I finished every round stronger and thought I’d won at least six, easy.’

Even in his solitary setback – to 2016 Olympian Lawrence Okolie at London’s O2 Arena in February 2018 – Chamberlain’s resilience was beyond reproach, even if his silky skills temporarily went AWOL.

And the Brixton bruiser believes it’s his proven ticker and tenacity that will ultimately take him to the top of Britain’s hugely competitive cruiserweight crop.

‘My knee was ruined after Okolie first pushed me down in round one but I still slogged through on the adrenalin. It was only 20% of me in there,’ insists affable Isaac.

‘Though others in the division say they want it more, I’ve already SHOWN I want it more. That’s the difference. You can measure height, weight, reach. You can’t measure heart!’

JOE DEGUARDIA’S STAR BOXING continues adding talent to its roster, this time in the form of undefeated Brazilian, super bantamweight, MICHEL “BABU” DA SILVA (13-0 12KO’s). Da Silva has no issue bringing the pain as he is currently riding a ten-fight knockout streak.

With all 13 of his fights taking place in his native Brazil, signing with Hall of Fame Promoter, Joe DeGuardia, Da Silva hopes to make a splash in the United States in the near future.

The 122 lb slugger began his boxing career at the age of 12, aspiring to be like his father, Aluisio Da Silva, who was a former boxer. At 15, Da Silva had his first amateur bout, and shortly thereafter participated in the World Championship in Liverpool England with the Brazilian boxing team. Finishing with 52 wins in 59 amateur fights, Da Silva turned to the professional ranks at the age of just 18.

Da Silva had this to say about signing with Star Boxing, “I want to thank Star Boxing for the amazing opportunity! I will work hard to achieve my biggest dream of becoming a World Champion! You can bet that that the world will witness me in some amazing fights!”

“On behalf of Michel Da Silva and the whole Team, I want to thank Star Boxing for the opportunity given,” said Da Silva’s manager, MARCEL TSHIYOYO. “I really do believe in Michel and I know he will reach his dreams of becoming world champion! We are ready to seize the opportunity!”

Star Boxing CEO, JOE DEGUARDIA, believes that “Michel has a fan friendly come forward style with immense power, especially in the super bantamweight division. We are looking forward to working with him.”

London, UK (10 August 2020) British Light-Heavyweight title contender Shakan Pitters has created his own special super-fiery Jerk hot sauce to fire him up for his mouth-watering showdown with rival Chad Sugden.

Birmingham’s Pitters, who collides with Sugden on Saturday 22nd August in Redditch, exclusively live on free-to-air Channel 5, put his passion for cooking to work during the lockdown and developed his own power-packed sauce that he’s named Shak Attak.

Based on the traditional Caribbean recipe that contains scotch bonnet peppers and a mixture of herbs and spices, Pitters has added a few extra secret power-boosting ingredients to give the sauce an extra punch with flavour and some added KO power.

Shak Attak can be added to chicken, pork, beef and fish dishes and comes with a mouth-burning five chilli rating plus an added warning of ‘tongue scorching hotness’ that Pitters says very few will be able to handle.

“This is one of the hottest sauce on the planet.  I love heat in my food but this stuff is crazy!” Enthused Pitters.

“Whilst it was quiet during the lockdown and after I did my self-isolated training I had so much time to myself, I decided to put it to good use by making my own hot sauce, which I’ve been meaning to do for some time.  I’ve always loved cooking, especially Caribbean food, and Jerk sauce is something I was brought up with and I love it,”

“The benefits of Jerk sauce to athletes has been well documented, just look at Olympic legend Usain Bolt who swears by it.  The antioxidant capsaicin has anti-inflammatory properties which relieves join pains, eating very hot peppers release endorphins to give you a buzz, the all-spice has properties to help relive muscle and joint pain, but the secret ingredients I’ve added have really taken my strength, stamina and power to another level,”

He added, “I’ve got a base recipe made with the standard ingredients like scotch bonnets peppers, all spice, thyme, ginger, lime juice, etc, but I did some research and found some additional ingredients that I’ve had to source, but the benefits are unbelievable and my punching power has doubled and you’ll see that on the night against Sugden,”

“Levi’s my main man and an inspiration in the kitchen, but once I get past Sugden I’m going to have to take on Levi in the kitchen, really test my culinary skills and have a Jerk sauce cook off against him!”

“I can’t wait for August 22nd and finally getting to Sugden. It’s been a long time coming but I’m going to have a real feast on him and pull him apart just like pork ribs.  Like my hot sauce I pack a real punch and Sugden will realise that when I land on him.”

Ryan Walsh Reflects On The Help He Received From Brother Liam