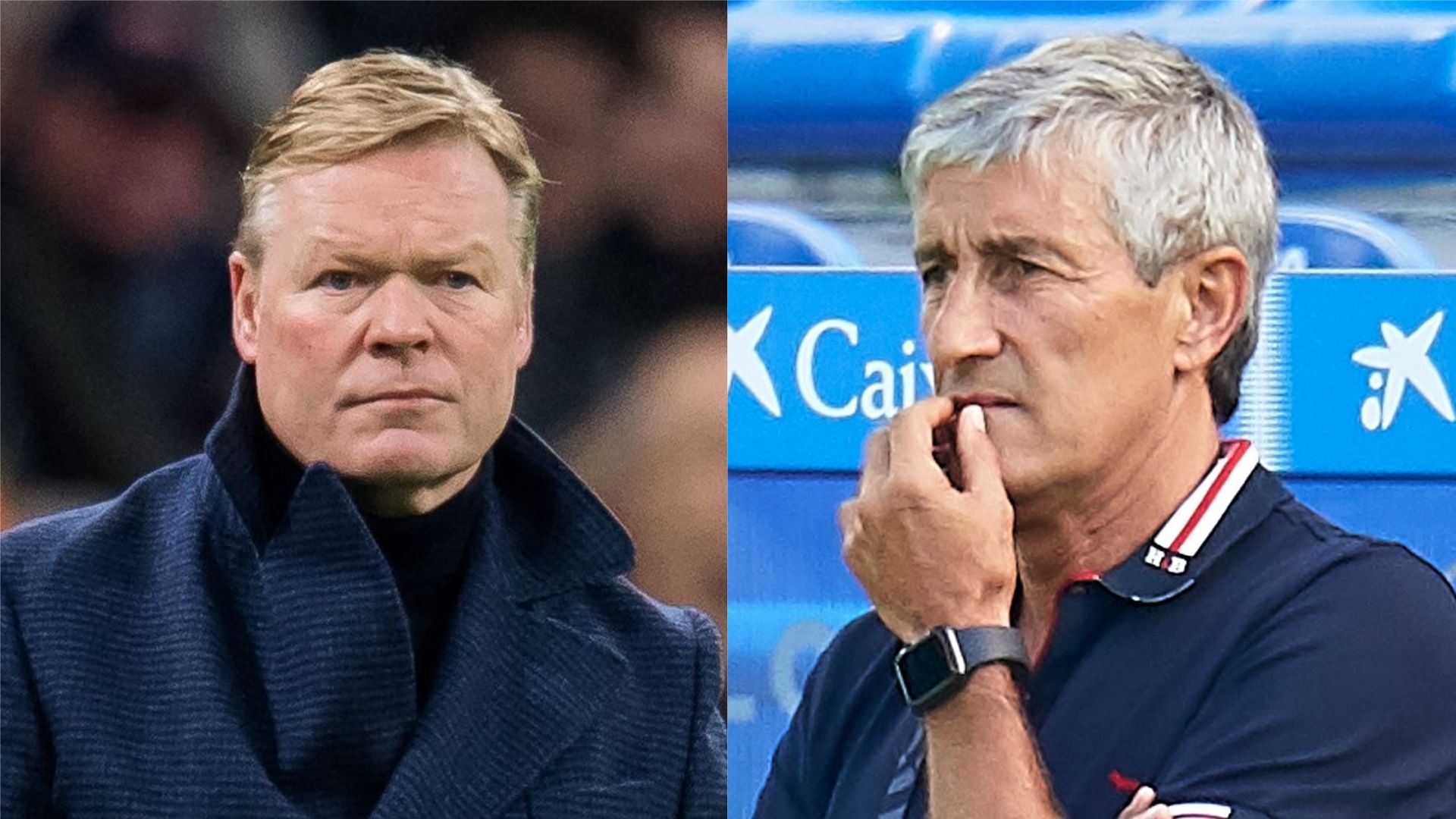 Ronald Koeman has agreed in principle to become the next Barcelona manager after the club confirmed the sacking of Quique Setien.

Barca officials are in talks with the Dutch FA over compensation, having made the Netherlands head coach the frontrunner to succeed Setien.

Setien was sacked in a meeting with technical director Eric Abidal just days after the humiliating 8-2 defeat to Bayern Munich in the Champions League quarter-finals.

Koeman – a Barcelona great as a player – is said to be the preferred choice of president Josep Maria Bartomeu, with an announcement expected in the next few days.

A Barcelona statement after Setien’s dismissal read: “This is the first decision within a wider restructuring of the first team which will be agreed between the current technical secretary and the new coach, who will be announced in the coming days.”

Barca would need to pay compensation to get Koeman out of his current role as Netherlands head coach.

Ex-Tottenham boss Mauricio Pochettino was a strong candidate and is the preferred choice of director Ramon Planes, with whom he worked at Espanyol.

However, the potential appointment of Pochettino has been met with opposition from ‘El Entorno’ – a term coined by Johan Cruyff in 1992 to describe the ‘environment’ of influential media and fans surrounding the team.

Pochettino is said to be interested in the job despite distancing himself in the past because of his legacy with Espanyol.

He recently did an interview with Spanish newspaper El Pais in which he tried to make amends for previous comments. Pochettino was a prominent player and then head coach at Espanyol.

Some members of the Barca board also hold out hope of convincing Xavi to return to the club. He is currently in charge at Qatari side Al Sadd.

Other names in the frame include Laurent Blanc, who is another ex-Barca player, and Barca B head coach Garcia Pimienta.

The club have also brought forward the date of the next presidential elections, which will now take place on the first matchday after March 15, 2021.

Elections have normally taken place in the summer, usually in June, but they have resisted calls for an immediate ballot to be held, saying it is “not feasible”.

“After considering all options, the board consider this to be the most viable date for the aforementioned elections,” a statement read.

“The board understand that an immediate call for elections is not feasible, given that the league season will begin on the weekend of September 12, 2020, and the situation arising from the COVID-19 crisis – both economically and socially.

“Consequently, the club will continue to implement the plan to reverse the sporting and economic situation, based on profound changes to the first team, plus a redefined budget to deal with the new situation caused by COVID-19, before the end of the current mandate.”

Analysis: Koeman in for one year only?

Spanish football expert Graham Hunter explained to Sky Sports News that candidate Victor Font wants Xavi in charge, meaning Koeman could head to the Nou Camp knowing he will only take over for a year.

“There’s a clear formula why they are talking to Ronald Koeman, and why he’s the one they want. Number one, it’s absolutely clear within the next year there will be presidential elections, the man who is very well placed to win those, Victor Font is absolutely committed to bringing Xavi,” Hunter said.

“So this is currently a one-year shot. Koeman is being told he can have a two-year deal which effectively seems to mean a year of work and almost certainly a year of compensation. The fact is that when the new president comes in, Font is completely committed to Xavi.

“Xavi won’t come in the mean time, so it needs someone of experience, someone who knows the Nou Camp inside out, speaks the language and has a good reputation of coaching younger players – there are players on the fringes at Barcelona.

“That’s why Koeman fits all those boxes, and it would appear Barcelona have fixed this deal with the Netherlands, and that Koeman, who has wanted this job for 20 years has said I’ll roll the dice, I’ll risk it only being a year.”

Pique: The club needs change, nobody is safe

Gerard Pique called for wholesale changes at the Nou Camp following Friday’s humiliation in the Champions League, even suggesting his own departure to help the club rebuild.

“We can’t compete like that, you can’t play like that in Europe. It is not the first time, the second time or the third time, it’s very tough. I hope it is useful for something,” Pique told the club’s website after Friday’s defeat.

“Now everyone has to have a good look at themselves, the club needs change and I am not talking about the coach or the players. I am not pointing the finger at anyone.

‘Xavi will arrive in a year’

“The elections are really prominent now in what happens at Barcelona. The elections are in a year’s time. Nobody is happy with the current board of people who run it, particularly Josep Bartomeu the president. He will be voted out. He can’t stay any longer anyway.

“That is the reason why Xavi turned the job down. Xavi is going to be on the ticket of one of the new campaigners to become the president. Therefore, Xavi doesn’t want to go in for a year with this president and not too many other managers want to go in knowing that in a year’s time a new president is going to be announced and when that new president makes his campaign, they will all have their managers that they’re putting on the ticket. Xavi if he backs one, that person will probably win.

“In a year’s time Xavi is going to be the manager of Barcelona. But which top manager in world football is really going to fancy babysitting the job for a year until the new president comes in, and you’re probably going to get fired.”

“Barcelona have to make some changes. Their squad isn’t big enough. In the second half of the season it was down to 19 senior players. They have struggled to fill the bench in La Liga games with the allowed amount of substitutions.

“The last La Liga game of the season they had five subs on the bench and two of them were goalkeepers. Three players got injured and were replaced and the next outfield player to come on as a sub was going to be (Marc-Andre) ter Stegen.

“That’s how short of numbers they were. They had suspensions, injuries and the B team had a play-off match coming up. There’s no way Barcelona should be going into games with only three outfield subsitutues.

“They need bodies. They’ve suffered with the fact (Ousmane) Dembele and (Samuel) Umtiti haven’t played enough football for Barcelona this season. Riqui Puig and Ansu Fati have bolstered the squad and that’s been a big plus – in this time of need, two young players have risen through the ranks and shown their worth.”