Cecilia Braekhus was one win away from the biggest fight of her historic career.

There now stands a strong chance of her never again stepping foot in the ring.

The longest-reigning champion in women’s boxing history saw her 11-year welterweight title reign come to a stunning halt after losing a 10-round majority decision to Jessica McCaskill (9-2, 3KOs). The occasion took place Saturday evening in downtown Tulsa, Oklahoma, serving as the first female bout to headline on DAZN-USA which has remained firmly entrenched on the evolution of a side of the sport that for too long had been regarded as a sideshow attraction and undercard filler. 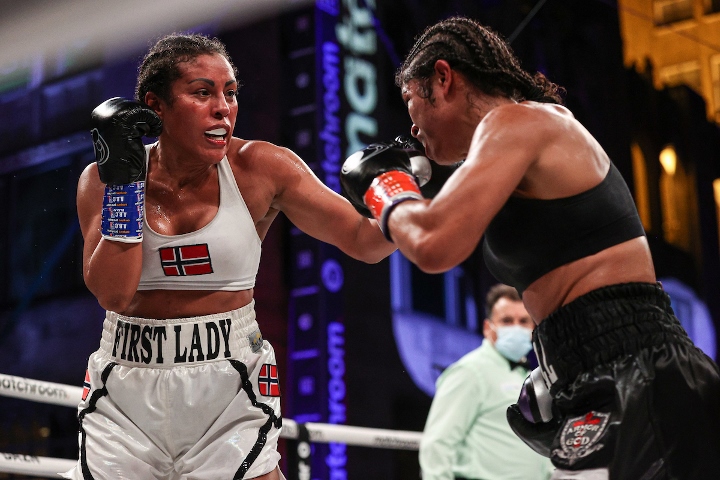 Braekhus was part of a massive movement to help change all of that, of which she is prouder than any of the records she set during her run as undisputed welterweight queen.

“Jessica just threw more punches than me and she really, really wanted it,” Braekhus (36-1, 9KOs) told DAZN’s Todd Grisham after the fight, refusing to complain about a decision that several argued could have went her way. “I am not going to say any more. I just want to congratulate her and hope she takes good care of these belts. I spent a lifetime collecting these belts, I hope she takes care of them and I know that she will.”

Both boxers endured two full training camps for a fight that was rescheduled from its original April 17 date in Oxon Hill, Maryland. The ongoing coronavirus pandemic shut down the event, while also keeping Norway’s Braekhus stateside since January, training out of Abel Sanchez’s famed The Summit in Big Bear, California.

By the end of the fight, there existed the possibility that she did enough to have lodged the 26th defense of at least one welterweight title in a reign which began in March 2009. She has collected every major divisional title along the way, having served as undisputed champion since 2014.

It all comes to a close, and so too could her career as a whole.

“I don’t know what will happen right now,” admitted Braekhus. “But I’m so proud to be part of women’s boxing right now. If this is my last fight, I can leave boxing saying that I was a part of this. I took part in women’s boxing at this level. That will be my biggest achievement.

“I’ve done so much. I miss my friends, my family. Women’s boxing is just in an amazing place right now. They will be just fine without me.”

Joshua: Wilder Told The World That He Ducked and Dodged Me

Hearn Could See One of Two Fury-Joshua Fights Land Overseas