Luke Santamaria made the most of his big opportunity Saturday night.

The 22-year-old welterweight pulled off an upset when he defeated Mykal Fox by unanimous decision in their 10-round welterweight fight at Microsoft Theater in Los Angeles. Santamaria (11-1-1, 7 KOs), of Garden Grove, California, knocked down Fox in the first round, regularly got inside on the taller, rangier southpaw and withstood Fox’s late really to produce the biggest win of his five-year pro career. 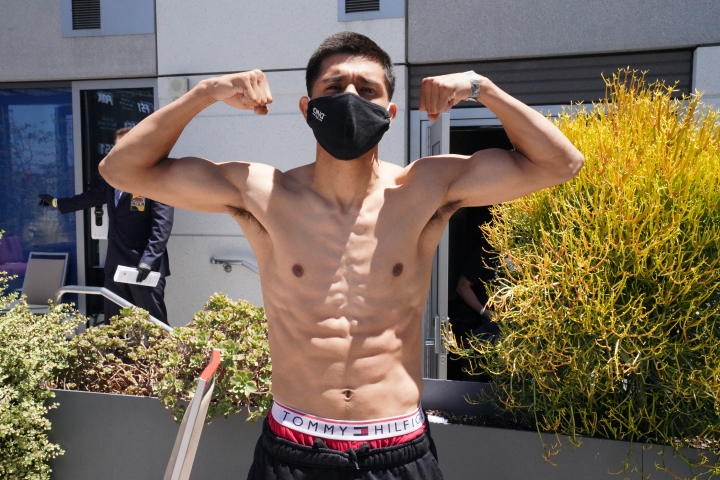 Santamaria and Fox fought inside again throughout the ninth round and for much of the 10th round. That type of fight favored the shorter Santamaria, who overcame a 7½-inch height disadvantage to land on Fox’s head and body.

Following a competitive seventh round mostly contested on the inside, Fox fought from more favorable distances for much of the eighth round. He got good extension on a straight left hand that stopped Santamaria in his tracks with just over a minute to go in the eighth.

A right and then a left by Santamaria made Fox stop punching with about 40 seconds remaining in the sixth round.

Santamaria continued to maneuver his way inside in the fifth round. Fox slipped some of his punches up top, but Santamaria snuck in a few body shots in that round.

Fox caught Santamaria with a straight, counter left toward the end of that fifth round.

Fox and Santamaria traded shots in the opening minute of the third round. Fox caught Santamaria with a short right and then a left with about 15 seconds to go in the third.

Santamaria and Fox furiously traded punches for about 20 seconds in the second half of the second round.

An elusive Fox slipped several of Santamaria’s punches in the first round, until Santamaria’s left hook left Fox sitting on the bottom rope with exactly a minute to go in that opening round. Fox got up quickly, but the knockdown cost him a point on the scorecards.

Santamaria’s right hand and short left hook landed before the left hook that knocked Fox down. Fox hadn’t been knocked down as a pro prior to Saturday night.