Hell froze over in British boxing this week and leading promoters Frank Warren and Eddie Hearn shared a phone call.

The promise is that they can and will work together, creating a slew of dream fights that will have fight fans on their feet and screaming for more.

This brief meeting of the minds was long overdue and there’s not really a moral high ground proposing a meeting a decade after it should have first been called but at least it’s something. That the two promotional figureheads in the United Kingdom haven’t been communicating all this time is an embarrassment, really.

Fighters have come and gone to and from one camp to the other but the tensions between the two outfits have not simmered one bit.

Even after Warren reached out this week – initially via press release, it’s worth adding – he did so after one of his staff members had queried Matchroom’s return to boxing practises with the British Boxing Board of Control.

Next thing, Warren is saying for the good of the fans the entities should work together, something fans have waited a decade to hear and something they hope they won’t have to wait another decade to witness.

Warren’s Queensberry Promotions fired out social media graphics with the line, ‘Who wants it?’

That would sound great to anyone but the Board already ordered Jenkins-Benn and the camps have been unable to agree to a deal, the WBO has mandated Williams-Andrade and others are just not realistic. After waiting for years for a world title fight, why would Whyte fight Dubois, who has an October fight with Joyce pencilled in, who in turn couldn’t face Chisora who is set to fight Oleksander Usyk first? 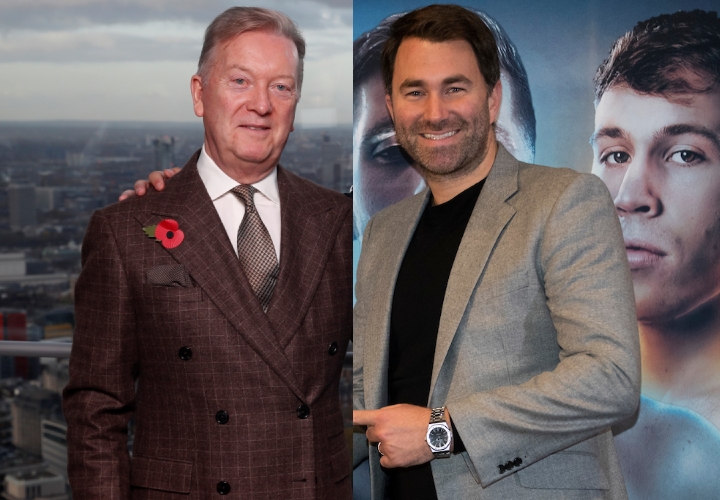 You hate to be the cynic who can’t see dream fights happening but actions, in this case, will speak far louder than words. As with any relationship, anything between Warren and Hearn would have to involve give and take. There’d have to be trust that they can work together long term over the course of several cards.

“It was an interesting move,” said Hearn. “I guess they’ve been working on that poster throughout lockdown,. You’d think that if you were serious about something like that you’d just call me or send an email rather than put a press release out but listen, there’s no reason why we can’t discuss it.”

Warren did later call Hearn, who was hosting a pre-fight press conference for this week’s Fight Camp, but at least they finally did talk.

Hearn would go on to say that perhaps in September they would meet over food but initially he seemed hesitant to roll out the red carpet to the proposal.

“All I ever get from them is legal letters and fake twitter accounts,” he said. “So let’s see where it goes but I understand it’s tough times so if I can help them out in any way I will consider it for sure. I know the concept looks good to fans. I don’t have a problem accepting an offer for one of our fighters to box on their shows if the fighter is happy and the money is secure. Right now I’m laser focused on our business and delivering for our fighters.”

His immediate attention is the remainder of his Fight Camp, which culminates on August 22 with a match between Whyte and Alexander Povetkin.

Of course, the internet was promptly divided by this week’s ‘breakthrough’. Cynics thought the olive branch pushed the fights further away while others took the bait immediately and thought the whole debacle had been fixed.

And, of course, no matter how willing the promoters are they are contracted to different networks and the broadcasters will have their own ideas about the fights they want to put on.

Still, the idea is that both promoters, both camps of boxers can lift one another up and in doing so they can lift the sport.

Regardless of who holds most of the power, the financial cards or the major stars, the sport needs a fresh injection and fresh hope. The idea that the two rosters could mix and match for the greater good is wonderfully idyllic but those who’ve been in the business for any amount of time will reserve judgement until things actually change. Yes, it’s a step and an important one, but actions speak far louder than words, particularly in this sport of grandstanding, posturing and ego. Let’s wait until the dam – the hindrances getting in the way of what fans have craved – is removed before we go getting our hopes up. It would be lovey if dreams came true in real life, let alone in boxing.

Simpson two behind Taylor in Hawaii

Simpson two behind Taylor in Hawaii