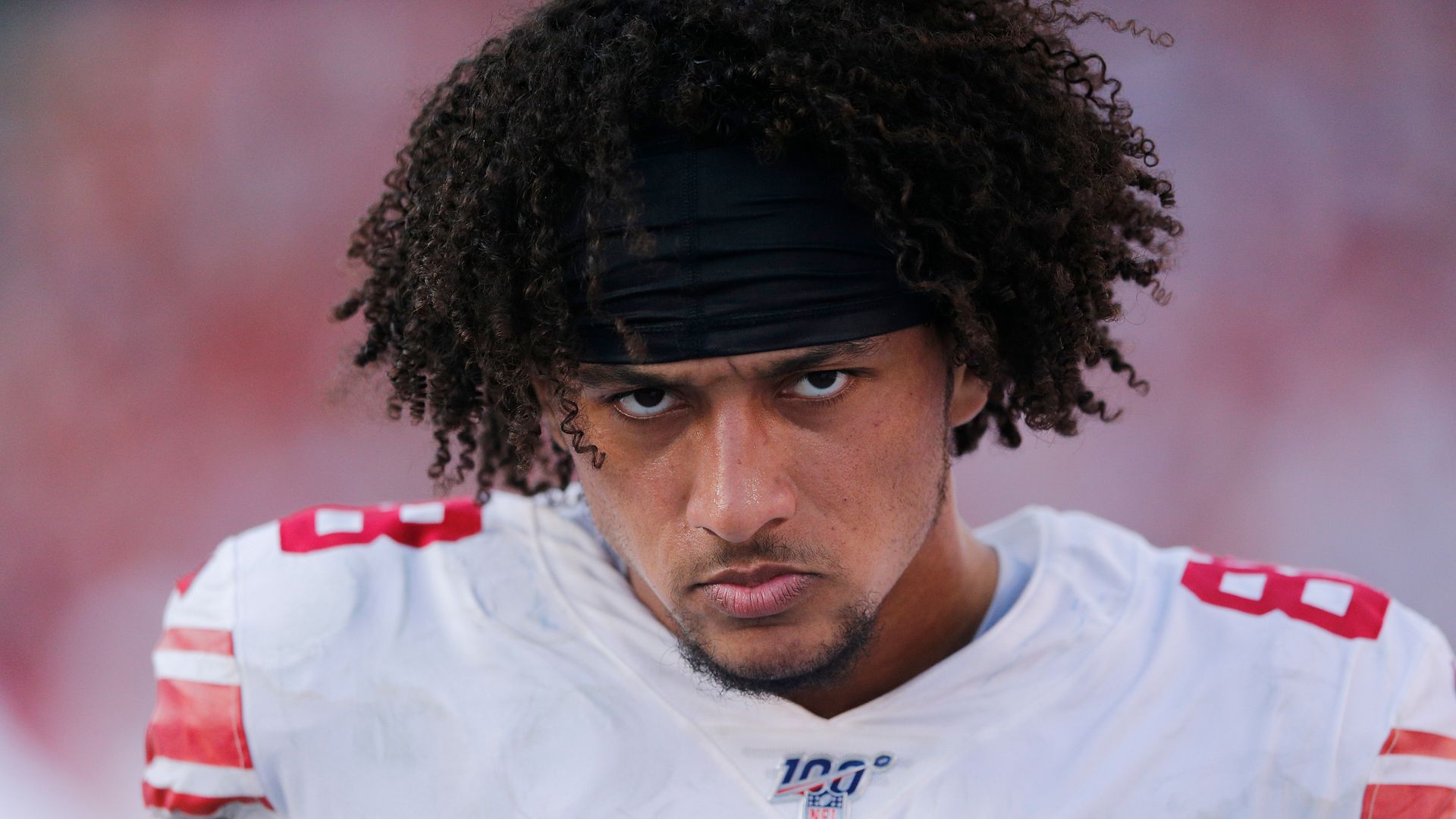 Take a moment to cast your eyes back on the 2017 NFL Draft and it is easy to be side-tracked by the Chicago Bears’ forever-to-be scrutinised decision to select Mitchell Trubisky ahead of Patrick Mahomes and Deshaun Watson.

You may recall that one being mentioned once or twice since then.

Scroll a little further down the list and there is a reminder that three tight ends were also selected in the first round for the first time since Jeremy Shockey, Dan Graham and Jerramy Stevens in 2002, and for just the second time since 1978.

The Tampa Bay Buccaneers made O.J. Howard the earliest tight end selection since Eric Ebron at No 10 in 2014 with the 19th overall pick, the New York Giants addressed a Will Tye-led position group with Evan Engram at No 23 and the Cleveland Browns turned to David Njoku at 29th overall.

Collectively they epitomised the evolution of the NFL’s modern tight end, flaunting receiver-calibre speed capable of creating separation from linebackers along with the traditional size and athleticism that made them a mismatch for defensive backs.

It was only really Howard who warranted recognition for his blocking expertise, perhaps explaining why he was the first of the three off the board. The fact Engram and Njoku were so close behind meanwhile spoke to the appeal of their receiver attributes.

Five more tight ends would be taken before the San Francisco 49ers used the 146th overall pick on Iowa’s George Kittle who, three seasons later, has mustered more receiving yards, made more catches and played more games than any one of Howard, Engram or Njoku. He is also the only one to have been named to the Pro Bowl, earning his second career selection last season.

After a modest rookie year of 43 catches for 515 yards and two touchdowns, Kittle set an NFL record for most receiving yards in a season by a tight end with 1,377 for five touchdowns in 2018. He followed that up in 2019 with 1,053 yards in 14 games as an essential piece to Kyle Shanahan’s offense on the road to Super Bowl LIV.

A ravenous appetite for blocking assignments and his bullish success rate upon engagement is matched by a destructive threat in the pass game, underlined by his NFL record as the first tight end to lead the league in yards after catch with 870.

His ascent to 7th on the NFL’s Top 100 list, as voted for by the players, has so far eclipsed what have been three unspectacular seasons for Howard, Engram and Njoku.

With each having their fifth-year contract options exercised, the task now is proving they are worthy of a nice pay day further down the line.

For Howard, it’s yet to really take off in Tampa Bay. His rookie season amounted to just 26 catches for 432 yards and six touchdowns as he found himself below Cameron Brate in the tight end pecking order.

The bulk of the targets meanwhile fell to Mike Evans, Adam Humphries and DeSean Jackson in what was a poor 5-11 Buccaneers team.

Trouble establishing himself continued in 2018 when he made 34 catches for 565 yards and five touchdowns before being placed on injured reserve with foot and ankle injuries after 10 games last November. Tampa finished 5-11 again as Jameis Winston and Fitzpatrick alternated between the starting job at quarterback and the bench.

The arrival of Bruce Arians as head coach in January 2019 came as a promising remedy, even if the impact wasn’t immediate.

Rob Gronkowski’s arrival earlier this offseason naturally raised doubts over Howard’s role in the Bucs offense, which in turn sparked rumours of a potential trade. Those suggestions have since been diffused and through the smoke has emerged an encouraging setup for the Alabama product.

Besides Tom Brady’s love of throwing to tight ends, Arians has made no secret of his plans for two tight end sets and even 13-personnel packages at times. Gronk may be less competition and more so a helping hand to elevate Howard.

Either way, a breakout year needs to be on the horizon.

Elsewhere in New York, there is no disputing Engram’s credentials as one of the Giants’ most gifted weapons on offense.

He exhibited as much in his rookie year when he shouldered the burden as Eli Manning’s leading target at times amid injuries to Odell Beckham Jr, Sterling Shepard and Brandon Marshall. Engram led the team with 64 catches, 115 targets and six touchdown receptions, the latter marking the most from a rookie tight end in Giants history.

His 722 receiving yards were also second only to Shepard’s 731 as the Giants limped to a 3-13 record.

Much like Howard, injuries have been a hindrance, while an ugly rebuild has been another major stumbling block. MCL and foot injuries limited him to 11 games in 2018, although Engram was still able to make 45 catches for 577 yards and three touchdowns in a Saquon Barkley-led offense.

Stay up to date with the latest news and features as we build up to the 2020 season.

On December 17 he was placed on injured reserve with a foot injury that had ruled him out of the last five games, Engram managing just eight in total on the year along with 467 yards for three touchdowns.

Health permitting, he now has the opportunity to consolidate a prominent role under new offensive coordinator Jason Garrett, who utilised the hands of tight end Jason Witten heavily in his prime with the Cowboys.

Though he missed half the season through injury, Engram built a budding rapport with quarterback Daniel Jones in 2019 – one Garrett will no doubt be looking to expand.

The less said about 2019 for Njoku in Cleveland, the better.

A broken wrist sustained during the same landing that game him a concussion in Week Two resulted in a place on injured reserve on September 20. He was activated again on December 7 but finished the season with just five catches for 41 yards in four games.

Of the three, Njoku may well have the toughest fight on his hands as he not only competes with free agency signing Austin Hooper but also looks to regain some trust after recently withdrawing his trade request.

Njoku’s role has been one of intrigue since the appointment of new head coach Kevin Stefanski, who fielded at least two tight ends for 43 percent of the Minnesota Vikings’ plays as offensive coordinator last season.

It was perhaps Dalvin Cook, though, who benefited most from 12 personnel packages as Stefanski employed a run-first offense, which could be the case again in Cleveland given Nick Chubb’s rise.

With that in mind, the challenge for Njoku to develop as a reliable blocker still very much stands.

“We have been very consistent that we think David can be a big part of where we are trying to go as a team this year and that we think he has an important role to play for this roster and for this team,” said general manager Andrew Berry.

“We are looking forward to working with David. I think he can have a fantastic year.”

Stefanski’s tight-end friendly offense should give Njoku a platform to flourish, particularly when the presence of Odell Beckham Jr and Jarvis Landry continues to restrict double-team luxuries and the threat of Chubb remains an ever-growing talking point in opposition defensive meetings.

It hasn’t been an easy ride for either one of the trio, but 2020 offers an opportunity to make some ground on Kittle’s unwavering progress.