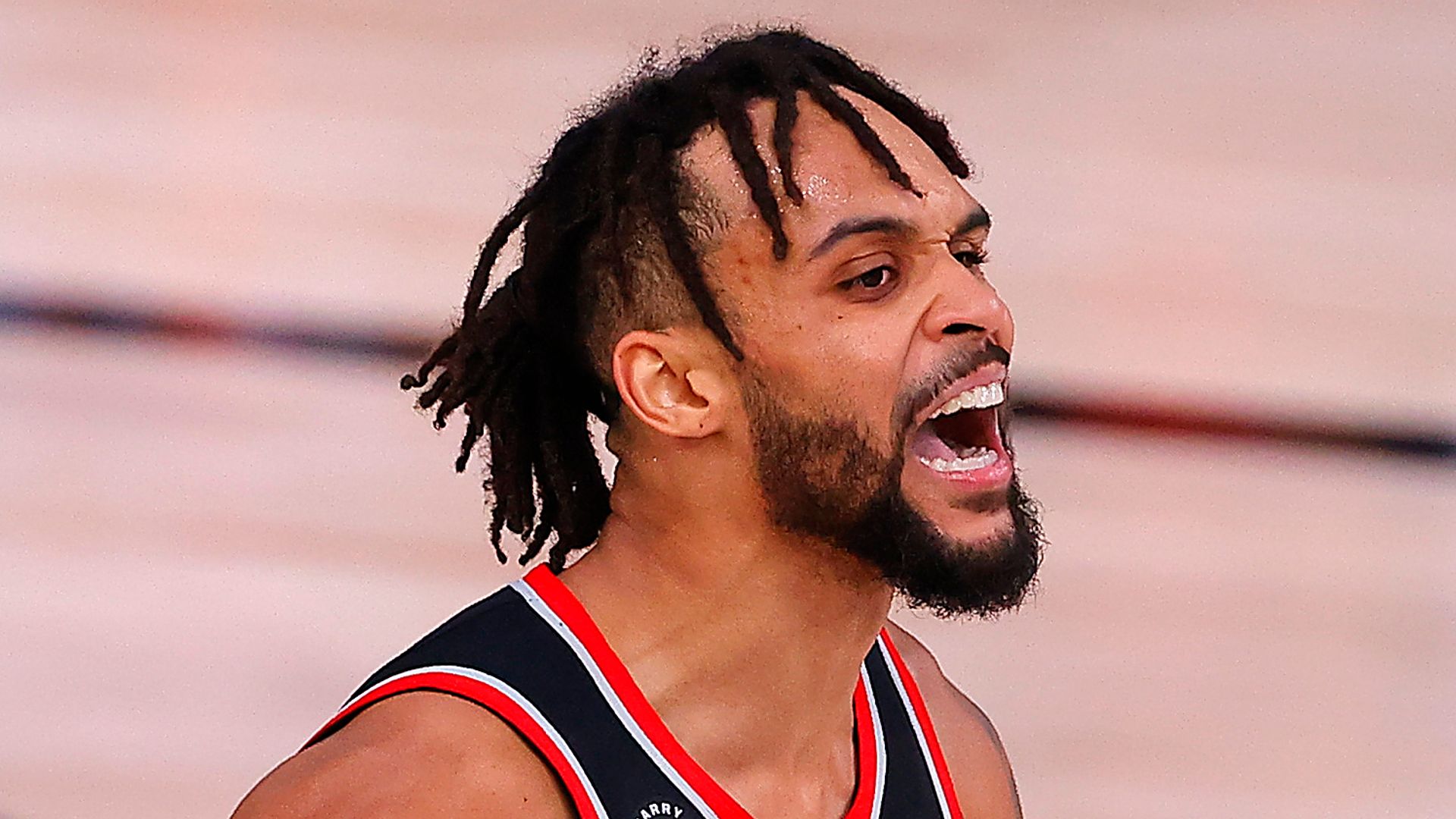 The NBA’s Florida bubble is proving a happy hunting ground for Gary Trent Jr. as he continues to strengthen his starting credentials for the Portland Trail Blazers.

Portland’s fine form since the restart has seen the 21-year-old put together a run of four-straight games with double-figure points tallies for the first time since back in February.

The best of the lot came during the week when he came off the bench to pour in 27 points in a 125-115 win over the Denver Nuggets, shooting 66.7 percent from the field and 70 percent from three-point range.

It has raised the question as to whether or not he is ready to take the floor from the off alongside the likes of Damian Lillard and CJ McCollum, with the Blazers set to take on the Los Angeles Clippers on Saturday evening.

“I love this guy, Gary Trent Jr.,” said Mike Tuck on Sky Sports’ Heatcheck. “He’s come into this bubble, he’s had 38 points in two games – in his last game, he hit seven threes for 21 points in 34 minutes.

“He’s contributing, he’s doing a lot of things. I’m saying this is hot, let’s put him in this starting lineup.

“It’s time for CJ McCollum or Melo (Carmelo Anthony) to sit down because we need some more energy on that floor right now and I think Gary Trent Jr. is the kid to bring it.

“I think without Trevor Ariza in the lineup right now, you’re missing something defensively, I think Melo is a guy that is a negative defender at this stage in his career and I think that Gary Trent Jr. gives you both ends of the floor.”

Starting Trent Jr, however, means potentially disturbing the harmony should one of McCollum or Carmelo Anthony drop to the bench, with Mo Mooncey citing the reputation of both as key variables.

While Trent Jr’s emergence has supplied the support McCollum and Lillard have required, history suggests Anthony may have something to say about being removed from the starting five.

“If you know CJ McCollum, what he means to the city of Portland, the reputation he’s established as an elite guard in this league, there is no way on earth he is going to be happy about moving to the bench,” said Mooncey.

“Then we look at Carmelo Anthony. He signed in OKC (Oklahoma City Thunder), it didn’t work out because he didn’t want to come off the bench.

Much of the praise regarding Trent Jr has surrounded his willingness to express himself, Lillard paying tribute to his teammate’s unflinching self belief in recent outings.

He appears to have become a popular figure in the Portland locker room and a rising player that the likes of Lillard and Anthony are seemingly keep to assist in his development.

“We’re looking at the Melo situation, we’re trying to convince him to come off the bench,” continued Mooncey. “From the people in Portland who I’ve spoken to throughout the season, they’ve really told me that Carmelo Anthony is taking Gary Trent Jr under his wing and has been mentoring him.

“I feel like if Melo is going to be benched for anyone, he would have the least amount of problems with it being for Gary Trent Jr.”

Anthony was held to seven points against the Nuggets last time out, but came up with clutch plays in recent wins over the Houston Rockets and Memphis Grizzlies.

“The biggest thing I think this adds to the team, is coming off the bench, Carmelo Anthony can create his own shot,” explained Mooncey. “He’s a bucket getter, you get him the ball and he’s creating a shot.

“Someone like Gary Trent Jr, he needs creators around him so he needs the Damian Lillards, the CJ McCollums, the Jusuf Nurkics to draw the attention of the defense. That way he can be open for those catch and shoot attempts.

“If I was the coach in Portland, I’d be trying him out for a game. It’s not about who starts a game, it’s about the lineup on the floor that finishes them.”

The Blazers face the Clippers on Saturday, live on Sky Sports Mix from 6pm.