Eddie Hearn, promoter for heavyweight contender Dillian Whyte, is planning to apply a lot of pressure to ensure his boxer receives a mandatory crack at the WBC world title.

Pursuant to a WBC order from last year, Whyte is due a mandatory shot by February 2021.

The current champion is Tyson Fury, who is scheduled to face Deontay Wilder in a trilogy fight on December 19th. 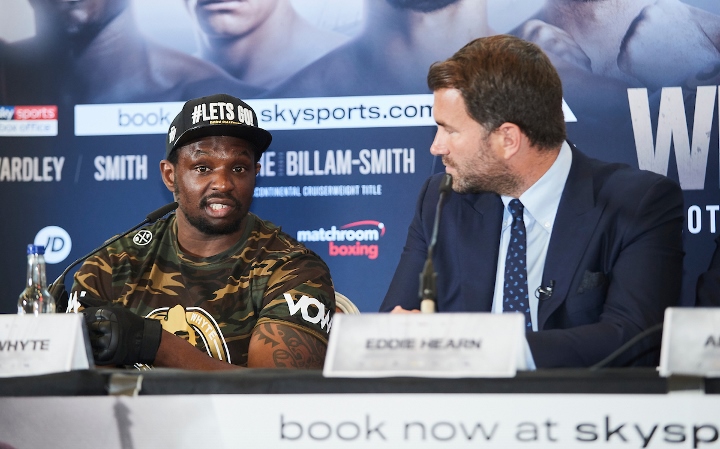 Whyte has his own business to take care of, when he faces former world champion Alexander Povetkin on August 22nd at Fight Camp in Brentwood.

WBC President Mauricio Sulaiman is planning to issue an order, which directs the Fury-Wilder winner to make an immediate defense against Whyte.

Should the Fury-Wilder trilogy get postponed until next year, Hearn will not allow Whyte to wait any longer. According to Hearn, Fury will then have to fight Whyte or vacate his title.

In the last few months, Fury has expressed very little interest in facing Whyte. He would rather take part in a full division unification with WBO, IBF, WBA, IBO world champion Anthony Joshua.

“Well I’m hearing what we hoped the WBC would enforce, which is the promise that [mandatory] fight has to happen,” Hearn told Sky Sports.

“The official date is before the end of February 2021. Obviously if Wilder-Fury takes place in December, maybe that gets pushed back a little bit. Great news for Dillian Whyte who has been pushing so hard, fully deserves this shot more than any fighter in boxing, forget the heavyweight division, but he does have business to attend to on August 22 against Alexander Povetkin.

Joe Joyce: Joshua Too Wary of Shots Coming at Him, I Back Fury To Win

Estrada Motivated To Knock Roman Gonzalez Out, Leave No Doubt