Terri Harper is loving every second of being a world champion. You know she is, she tells you all the time. Harper won the WBC super-featherweight title in February and makes her first defence against Natasha Jonas on Eddie Hearn’s Fight Camp show in Essex on Friday. And having gone from unknown to Britain’s leading female boxer in a short time takes some getting used to.

“I’m just loving it and enjoying every moment, just soaking it all in,” Harper said.

“It’s crazy really. I never in a million years thought I would be in this position. The fact that I’m here so soon too and it wasn’t that long ago that I was working in a chip shop.” 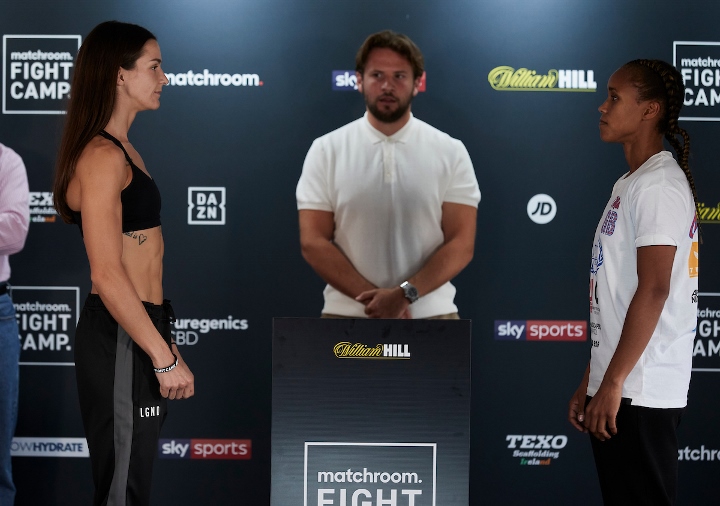 If her victory over Eva Wahlstrom to claim the title was a big deal, her fight with former Olympian Jonas, headlining the second edition of Hearn’s high-profile garden party, is bigger, as it has propelled her into the spotlight.

Jonas boxed at the London Olympics when Harper was just 15. She had already met Jonas, who presented an award to her at an amateur show. The inspiration did not really wear off on her, though, as Harper gave the sport up aged 16, before Stefy Bull sought her out to encourage her to become professional.

“I dropped out of boxing for stupid reasons really,” she said. “That for me was probably the best thing I could have done because it made me realise how much I love the sport. I love every minute of it and I’m dedicated 110 per cent to the sport.

“When I was an amateur, I was terrible with my nerves. That’s the one thing which worked to my disadvantage. But since I’ve come back, I’ve kind of learnt how to deal with them.

“I just enjoy these moments now. You’re not human if you don’t get nervous, but while there is pressure, it’s nothing compared to when I went out and fought in front of 6,000 people at Sheffield Arena.

“I knew a lot of people had invested in me and I had a lot of pressure on them to go out and win. I rose to the occasion and came out as champion.”

She seems completely unconcerned by Jonas’s experience advantage too, believing the older boxer won’t be able to cope with the speed she sets.

“Tasha is a good opponent, she’s only going to fetch the best out of me,” Harper said.

“I want to make it my fight, I want to fight at my pace. Tasha’s never done 10 rounds and I want to see how she does at a high pace.

“Watching a few of Tasha’s fights, she does fight at a slower pace than I’m used to. I want to put the pressure on her and we’ll see how it works out.”

At 23, an exciting world is opening up in front of her. Beat Jonas and she can expect a unification against WBO champion Ewa Brodnicka, or to face increasingly prominent rival Mikaela Mayer. Fights with fellow Brit Chantelle Cameron and even a fight with Katie Taylor might not be too far away either. All that could put a fair amount of pressure on her.

“Every time I’ve been put in there on a big occasion, I’ve stepped up, whereas Tasha hasn’t really proved herself as a professional,” Harper said.

“It’s Tasha’s last opportunity to prove herself and the pressure is on her, it’s got to be. I’m just loving every minute of it.”