As manager and trainer of the unified IBO & WBC World super-featherweight champion and widely-regarded #1 in the world, Terri Harper, it’s only natural that Stefy Bull is happy to preach about his charge. Harper is undefeated with a 10-0 record at just twenty-three years of age, yet American contender, Mikaela Mayer took exception to Harper unifying her IBO crown with Eva Wahlstrom’s WBC strap last February. It was a title shot she believed should have been hers and a war of words on social media ensued.

“They just seem to be very bitter that Terri got an opportunity and she goes on about this #15 ranking. If I had ten minutes with her, I’ll be able to explain you’ve got it all wrong,” Bull told me.

“Terri were ranked as high as #6 by the WBC at lightweight. They’re forgetting that Terri’s first championship was the WBC International lightweight title. Nina Bradley (who Harper stopped in the tenth round) were top ten ranked in all the governing bodies when we fought Nina. It was a calculated gamble by myself. I strongly believed Terri could win. We took this gamble for a lightweight title and Terri was ranked #6 by the WBC in the lightweight division. When I spoke with the IBO, it was originally for the vacant IBO lightweight world title which was going to be contested with Estelle Mossely (who has since claimed that world title). Fate happens because we’ve always said Terri’s natural weight is super-featherweight.” 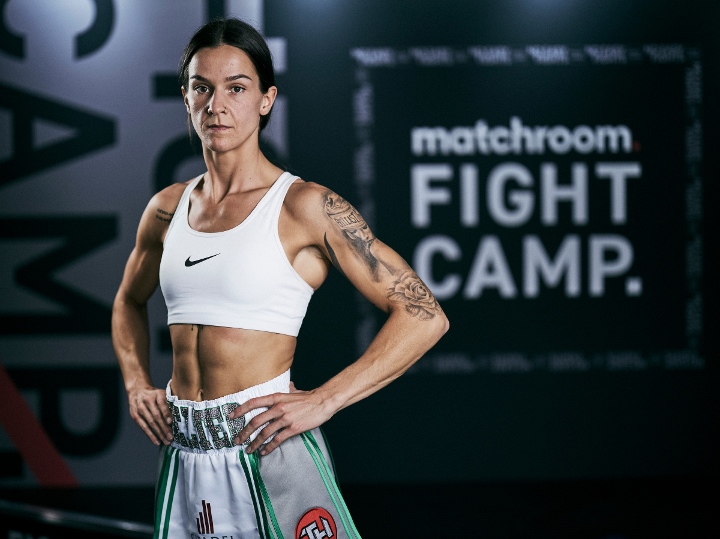 Just over one year ago, Harper emphatically stopped Nozipho Bell in front of a sold-out crowd in Rotherham to claim the IBO 130lbs world title. She had arrived on the world stage.

“So, fate happened and the IBO (super-featherweight) was vacant, because Terri was highly-ranked, it made her eligible although she were ranked at lightweight,” he said. “When Terri won the IBO title, she becomes a world champion and drops out of the WBC world rankings. Maybe they were a little bit bitter because I didn’t go down the original WBC route, so she dropped out of the ratings. When they entered her, they entered her at #15 at super-featherweight.”

The Yorkshire-based manager, trainer and promoter then explained how he believes there is a huge gulf when comparing the competition Harper and Mayer have beaten so far. “Mikaela’s got a #1 WBC ranking without even beating a top-ten genuine contender,” Bull exclaimed!

“Even down to where Terri had beat Nina Bradley, Nina were ranked in all governing bodies, at super-lightweight, top five. Then she beats a former two-time world champion, (Claudia Andrea) Lopez in fine fashion. Then she goes and beats Nozipho Bell; who controversially lost on points to Ewa Brodnicka for WBO world title.”

He continued: “It’s almost as if they think Terri come up from nowhere. Terri were an IBO world champion. She got the opportunity because Matchroom and Eddie Hearn do what they do and get fighters’ opportunities and they paid the money that Top Rank weren’t willing to pay! It’s a bit derogatory and a bit disrespectful to make out as if Terri didn’t deserve a title fight when she’s been consistently, since her 5th/6th pro fight, fighting girls with winning records. Look at (Viviane) Obenauf, who’s Mikaela Mayer fought (that’s) anyone like Obenauf? They can’t say she weren’t deserving of Eva Wahlstrom because when she fought her – it were a one-sided points win. She was deserving of the opportunity. She’s IBO & WBC world champion.”

The thirty-seven pro fight veteran has been the brains behind Harper’s stratospheric rise to the very top of the sport and he shows no signs of willing to slow their momentum.

“As a manager, it’s my job with Terri to make something that creates history now. She’s been first (female) WBC world champion from UK. It’s going to be the first all-British (female) world title fight next (on August 7th against Natasha Jonas). We’re constantly breaking boundaries. Let’s go for ‘Undisputed’. Terri’s willing to fight anybody. If I said to Terri: ‘You’re fighting Mikaela Mayer next or Katie Taylor next’, that’s fine she’ll fight whoever I say. I want her to fight other world champions. So, I can respect the rest of the girls will all want to fight Terri and that’s great. I wish them all the best but we want to fight champions. If Mikaela Mayer has another belt, there’s a fight there.”

Despite the fact that the 2016 Olympian doesn’t yet hold a world title, it’s likely to be only a matter of time before the two undefeated superstars eventually clash.

“Get your management team to do something about being #1. Mikaela can keep talking and she’s doing great. She’s putting Terri’s name out there in America and it’ll be a big fight.”

Chan 2021: Rwanda have what it takes to beat Uganda – Sugira