The two interim title fights the WBA has approved for Saturday night in Los Angeles are two of the more egregious examples of the unscrupulous organization’s never-ending need to scam sanctioning fees out of boxers and promoters.

The easy excuse for the WBA’s championship committee is that Allen is ranked number one among its super middleweight contenders and Morrell is rated third.

The problem, other than the farcical fact that the WBA already has three 168-pound champions, is that the unbeaten Allen (22-0-1, 14 KOs) hasn’t done anything to warrant occupying the top spot in its super middleweight ratings.

The Guyanese-born, Brooklyn-based boxer’s biggest win was a 10-round, unanimous-decision victory over Derrick Webster (28-3, 14 KOs) in his last fight, which took place in February 2019. Most of the 38-year-old Webster’s wins weren’t exactly noteworthy before he lost to Allen, against whom Morrell is consistently listed as an 11-1 favorite.

Still, if its mission merely were to do right by Allen, why wouldn’t the WBA have previously ordered its super super middleweight champion (yes, you read that correctly), Callum Smith, or its world super middleweight champion, Canelo Alvarez, to defend either of those two titles against Allen? Those options, however difficult those matches might’ve been to make because the unknown Allen would be a huge underdog against either fighter, would’ve made more sense than creating another utterly unnecessary interim title and moving Allen into a fight against a talented but low-profile opponent for less money than he could’ve made to battle Alvarez or even Smith.

Mexico’s Alvarez hasn’t defended his WBA world super middleweight title since he won it by knocking out Rocky Fielding in December 2018. DAZN probably wouldn’t approve an Alvarez-Allen fight even if the WBA ordered it.

Nevertheless, creating a fourth 168-pound championship shouldn’t have been the WBA’s “solution” to cleaning up the super middleweight mess it went out of its way to create.

For those keeping track at home, Fedor Chudinov also is the inexplicable WBA gold champion. Allen held that title before he gave it up and the WBA installed him as its number one contender.

Chudinov captured that belt by beating Hassan N’Dam by unanimous decision in their 12-rounder December 13. N’Dam somehow qualified for that secondary championship chance by getting knocked out by Smith in the third round of his previous fight.

Morrell, meanwhile, is a promising prospect whose uncommon combination of power, skill and speed has his handlers and stablemates predicting stardom for the Cuban southpaw. 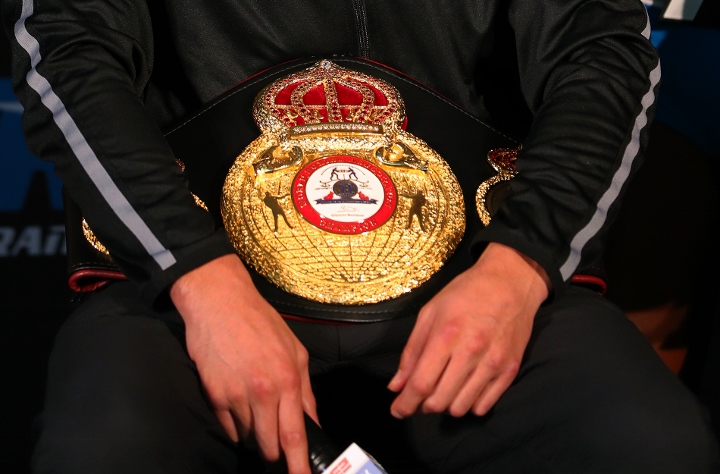 His potential aside, the 22-year-old Morrell has beaten Yendris Rodriguez (2-7-1, 2 KOs) and Quinton Rankin (15-7-2, 12 KOs, 1 NC) in his two fights as a pro since last August 31. Those wins were hardly justification for Morrell competing for even an interim title in his third professional fight.

Before anyone compares Morrell to Vasiliy Lomachenko, remember that the two-time Olympic gold medalist fought a top opponent, Orlando Salido, for the WBO featherweight title in his second pro appearance – a 12-round, split-decision defeat in March 2014.

You need not follow anything other than the money to determine why the WBA would continually cause confusion by creating at least three champions in virtually every weight class.

The WBA typically takes three percent apiece from fighters’ purses for title bouts in which they aren’t earning inordinate amounts of money. Lower percentages from their purses often are negotiated with the WBA and other sanctioning organizations when boxers make millions for fights.

In addition to taking fees from the fighters, the WBA charges the promoter or co-promoters a flat fee, usually in excess of $25,000, for even an interim title bout.

Promoters pay these fees in instances such as Saturday night primarily because it sounds better for FOX, in this case, to promote title fights on its airwaves, legitimate or otherwise.

The casual fight fans FOX seeks to transform into regular boxing viewers usually don’t know the super champions from the interim champions. The hardcore boxing fans, even those the most bothered by the WBA’s sanctioning shenanigans, are going to tune in anyway.

Fighters often benefit financially from owning even one of four titles in a given division, which sometimes makes paying those sanctioning fees worthwhile.

A combination of the aforementioned factors is why we’ll wind up with 52 WBA champions combined in boxing’s 17 divisions by late Saturday night.

As for James (26-1, 12 KOs) and Dulorme (25-3-1, 16 KOs), they’re legitimate welterweight contenders and should produce a competitive, entertaining main event Saturday night at Microsoft Theater. The winner would warrant serious consideration for a legitimate 147-pound title shot, yet there’s no discernible need for them to fight for a fourth WBA welterweight championship.

James is ranked fifth by the WBA in its 147-pound ratings, five spots above the 10th-ranked Dulorme. The WBA’s number one contender, Yordenis Ugas, has beaten James and Dulorme within the past four years, but James and Dulorme will fight for a WBA welterweight belt before Ugas.

The WBA recently ordered Ugas and sixth-ranked Abel Ramos to fight for its world welterweight title, which should’ve been eliminated when then-world champion Manny Pacquiao beat “super” champion Keith Thurman by split decision in their 12-rounder a year ago in Las Vegas.

The outcome of Pacquiao-Thurman temporarily created clarity among the WBA’s welterweight champions. Apparently agitated by something sensible, the WBA went and sanctioned the Alexander Besputin-Radzhab Butaev bout for that world welterweight title.

Besputin beat Butaev by unanimous decision in their 12-round fight November 30 in Monte Carlo, but Besputin tested positive for a banned substance, Ligandrol, afterward. The WBA eventually stripped Besputin of its world welterweight title.

Rather than ordering an Ugas-Butaev fight, the WBA dubiously approved Ugas-Ramos and assured the perturbed Butaev’s handlers that he’ll face the winner next. Butaev is ranked seventh by the WBA – behind Ugas, James and Ramos – even though he was ranked second when he suffered that tainted defeat to Besputin.

The WBA sanctioned James-Dulorme as an interim title bout before the Besputin-Butaev situation was rectified. Besputin’s status as a champion was under review, according to the WBA, when James-Dulorme was announced as an interim welterweight title championship match March 5.

They were supposed to fight April 11 at The Armory in Minneapolis, James’ hometown, but the COVID-19 pandemic caused almost a four-month postponement.

If James-Dulorme doesn’t end in a draw, there will be three WBA welterweight champions after their fight. A fourth will be crowned the night Ugas and Ramos meet later this year.

In addition to Pacquiao, the James-Dulorme winner and the Ugas-Ramos victor, Vergil Ortiz Jr. owns the WBA’s gold title at 147 pounds.

If this welterweight mess meant that the emerging Ortiz were guaranteed a shot at Pacquiao or even one of the other two winners, it at least would make some sort of sense.

It is instead in the process of crowning four welterweight champions, causing confusion and scamming sanctioning fees the ever-embarrassing WBA way.