Jamal James has a better record than Thomas Dulorme from a statistical standpoint.

James is 26-1, including 12 knockouts, entering their 12-round fight Saturday night for the WBA interim welterweight title. Dulorme takes a 25-3-1 record into it, including 16 knockouts.

If you delve deeper into their resumes, though, Dulorme is confident you will find that he has faced a much higher level of opposition than James. Both boxers have lost 10-round unanimous decisions to Cuban contender Yordenis Ugas (25-4, 11 KOs) in recent years, but Dulorme also has faced WBO welterweight champion Terence Crawford (36-0, 27 KOs), one of the top three boxers, pound-for-pound, in the sport, and former two-division champion Jessie Vargas (29-3-2, 11 KOs). 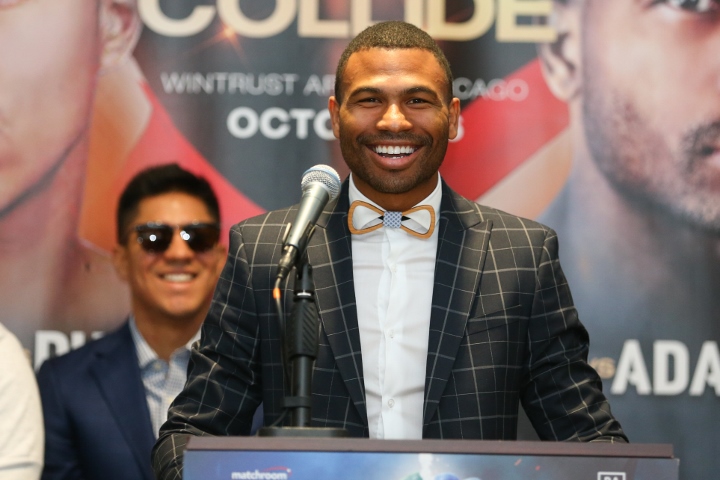 Crawford stopped Dulorme in the sixth round of their fight in April 2015, but Dulorme battled Vargas to a 12-round majority draw in October 2018. Puerto Rico’s Dulorme dealt Karim Mayfield and Terrel Williams their first defeats as well.

Minneapolis’ James has knocked out Diego Chaves in the third round, and out-pointed Wale Omotoso and Javier Molina in 10-rounders for three of his more noteworthy wins. Dulorme is still convinced his experience against top opponents gives him an edge over James.

“I can put on a better performance than James,” Dulorme told BoxingScene.com through a translator. “I give him his respect. He’s a good fighter. Everything he does, he does very well. I just think I can fight better. And if you look at my resume, I’ve fought a lot better fighters than Jamal James has fought. I think that’ll show in the fight. You’ve seen some of the wars I’ve been in. I believe I can raise my game up for this fight. No fight is easy, but I’m very confident I’ll win. I plan on putting a great show.”

FOX will televise Dulorme-James as the main event of a three-fight telecast that’ll begin at 8 p.m. ET/5 p.m. PT from Microsoft Theater in Los Angeles. The 32-year-old James, who hasn’t been knocked out as a pro, has won six straight fights since Ugas beat him in August 2016.

The broadcast Saturday night also will include a 12-round, 168-pound battle between Cuban southpaw David Morrell Jr. (2-0, 2 KOs) and Brooklyn’s Lennox Allen (22-0-1, 14 KOs) for the WBA interim super middleweight championship.

For Dulorme, this rescheduled championship chance gives him an opportunity to win at least an interim crown five years after Crawford defeated him in their fight for Crawford’s WBO junior welterweight title.

“It’s very important for me,” Dulorme said. “It’s gonna be a great feeling for me because of all the hard work I’ve put in. I’m gonna get that title not only for myself, but for my family, my friends and everyone who has helped me along the way.

“It’ll be history for me, getting a title and beating Jamal James. Every win you get puts you in a better position, but this one will put me in an especially good position.”

Dulorme and James were supposed to fight April 11 at The Armory in Minneapolis, but that FOX tripleheader was scrapped due to the COVID-19 pandemic.