Carl Frampton insists that while he hopes his anticipated clash with Jamel Herring still takes place this year, he can’t afford to look beyond his fight at the BT Sport Studios on August 15.

He had been due to face Armenia’s Vahram Vardanyan but a visa issue means Frampton is looking for a new dance partner.

The Irishman is 27-2 (15) and at 33 could be forgiven for only wanting big fights from here on in. But the global pandemic has caused his outlook to change.

“In an ideal world I’d love to have been fighting Jamel Herring and I was meant to fight him on June 13,” said Frampton. “That was the proposed date, but with everything going on in the world that was ruled out – but that’s what I wanted, the Jamel Herring fight. I spoke to my team and said, ‘Should I hang off and wait ‘til the end of the year’, they suggested it would be good to get a fight in just to keep busy, keep ticking over and I agreed with them.

“We had a number of opponents, Viorel Simion who fought [Scott] Quigg and Shakur [Stevenson], we asked Devis Boschiero, there was a French guy who agreed to everything and then stopped picking up his phone so we were running out of time.” 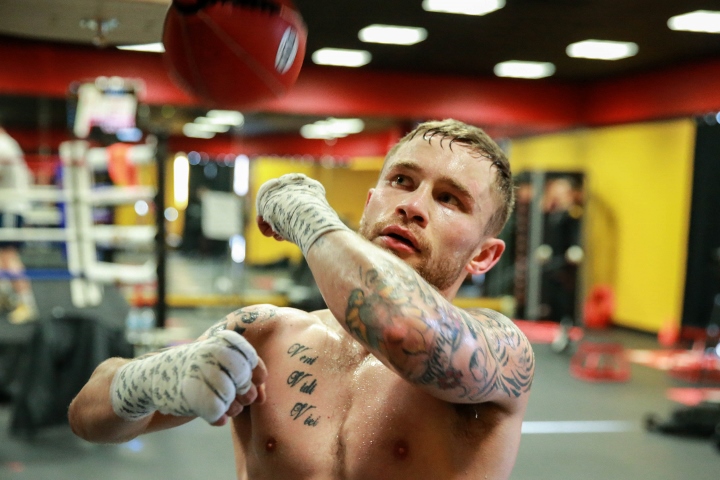 He had been excited to face the heavy handed Vardanyan because, with 14KOs in 21 wins, Frampton said he would have stayed switched on.

The idea was to look good next week, then land Herring.

Frampton has had a 10-week camp.  He trained in his home gym during lockdown and as soon he’s been living at the home of his trainer Jamie Moore as preparations neared an end.

“Jamie has very kindly let me move into his house and I’m enjoying that rather than being stuck in a hotel somewhere,” he said. “I was training at home, hitting the bag, running and stuff so I was in reasonable shape coming in, but now I’m ready for 10 hard rounds no doubt about it.”

“I feel okay,” he said about being in the BT studios. “People keep asking the question, how’s it going to feel boxing in an empty room and I don’t know. I don’t know. I’ve had spars in front of very few people. I’ve fought in the amateurs in front of very little people on occasion but I’m used to big crowds. The thing with boxing is the other guy’s in the exact same environment as me so it’s going to be strange for both of us, but when the bell goes we’ll forget about it and we’ll be fine.”

And he’s sure he isn’t focused on what might be against Herring.

“I’m up for it,” he added of next week’s clash. “That’s something I’ve been really focused on, I don’t want any complacency creeping in.”

“I probably know as much as you know,” Frampton said. “Bob Arum mentioned November. I think someone else mentioned maybe chief support to [Tyson] Fury-[Deontay] Wilder, that would be amazing if that could happen.”