Mykal Fox isn’t the only member of his fighting family who is on standby.

BoxingScene.com has been informed that Alantez Fox, Mykal’s older brother, is a potential replacement preparing to fill in for Showtime’s main event August 15 at Mohegan Sun Arena in Uncasville, Connecticut. Alantez Fox could face either WBC super middleweight champion David Benavidez or Alexis Angulo if either fighter tests positive for COVID-19 or withdraws from their 12-round, 168-pound title fight for another reason.

Alantez Fox is not ranked in the WBC’s top 15 at super middleweight. If he were to oppose Phoenix’s Benavidez (22-0, 19 KOs), it probably would be a non-title fight. 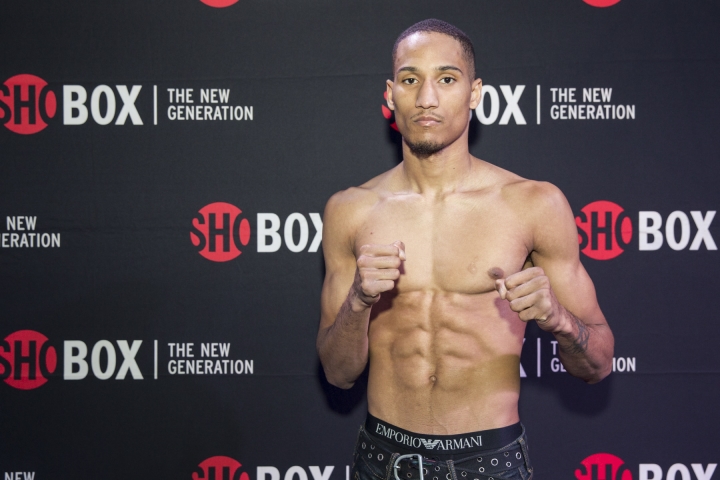 Alantez Fox (26-2-1, 12 KOs), of Upper Marlboro, Maryland, is scheduled to square off against Ghana’s Habib Ahmed (27-1-1, 18 KOs) in an eight-round super middleweight match on the non-televised portion of the Benavidez-Angulo undercard. In his most recent appearance, England’s Liam Williams (22-2-1, 17 KOs) stopped Alantez Fox in the fifth round of their middleweight match December 21 at Copper Box Arena in London.

The 6-feet-4 Fox primarily has competed as a middleweight during his 10-year pro career, but the 28-year-old veteran has participated in super middleweight bouts as well.

Before he heads to Connecticut for fight week, Alantez Fox will work Mykal Fox’s corner Saturday night at Microsoft Theater in Los Angeles.

Mykal Fox, 24, is scheduled to face Lucas Santamaria (10-1-1, 7 KOs), of Garden Grove, California, in a 10-round welterweight bout on the Thomas Dulorme-Jamal James undercard. The Fox-Santamaria match will be the third fight FS1 televises after FOX’s three-bout broadcast headlined by Dulorme (25-3-1, 16 KOs) and James (26-1, 12 KOs) in a 12-round, 147-pound fight for the WBA interim welterweight title.

Mykal Fox (22-1, 5 KOs), who is ranked 13th in the welterweight division by the WBA, remains on standby in case Las Vegas’ Dulorme or Minneapolis’ James fails a COVID-19 test. All 14 boxers scheduled compete on that card Saturday night will take their final pre-fight COVID-19 tests Friday.