Watch Fowler vs Harper at Fight Camp on Friday, live on Sky Sports.

Adam Harper tells Sky Sports about how his remarkable return to boxing has led to a career-changing clash with Anthony Fowler at Friday’s ‘Fight Camp.’

This time last year Tewkesbury’s Harper was done with boxing. A few months after becoming English super-welterweight champion, a routine brain scan had brought his career to a halt. But then specialists reviewed the diagnosis and offered him a reprieve.

The pandemic put the planned comeback on hold, but he finally makes his return to the ring at Friday’s ‘Fight Camp’, live on Sky Sports, and he’s not easing his way back in: he’s up against a resurgent Fowler at Matchroom HQ.

“On paper this shouldn’t even be a fight. I’ve been inactive for 23 months. He’s an Olympian and a Commonwealth Gold medallist. He’ll tell you this himself! This is a going to be my toughest fight physically and mentally. He’s called ‘The Machine’ for a reason,” Harper told Sky Sports.

Still, are there nagging doubts over his health? Does Harper fear more blows to the head, now he’s spent so much time with doctors schooled in brain damage? He is phlegmatic, philosophical and determined to seize the day.

“My mum’s very ill with stuff in her head and she’s never boxed in her life. I’ve never taken drugs or smoked. I haven’t drunk alcohol for six and a half years. Some people live to their 80s, but they’re dead at 20, because they’re too scared to do anything. They haven’t got any ambition or get up and go. I don’t want to be one of those people.”

Fowler’s swaggering ascent through the super welter ranks was dented by a defeat in March 2019 to Scott Fitzgerald. But the Liverpudlian has rebounded with three wins and Harper knows if he pulls off an upset victory, big doors will open.

“I’m more than aware that if I beat Fowler, I could get a shot at the British title. I’m not sure what’s going on with Scott Fizgerald. But he’s still the British champion. I think Scott’s a great character and a really dangerous fighter.

“I’m happy to get in the ring with any super-welterweight or middleweight. I want to make as much money as quickly as possible and then retire and become a little fat man.” 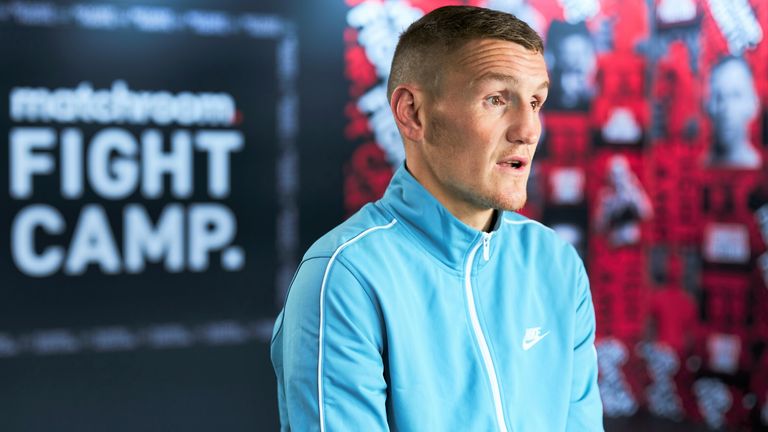 I’ve never met him, but I think he’s a marmite character, probably so am I to some.

Harper pitches himself as a kind of character counterpoint to Fowler. The Gloucestershire fighter has a private account on Instagram, has taken Twitter off his phone and shies away from media engagements. Fowler, by contrast, has built a business selling CBD oil off his prolific use of socials, although Harper is hesitant to judge his rival without true insight.

“I don’t know what to make of Fowler. I’ve never met him, but I think he’s a Marmite character, probably so am I to some. He’s probably a really nice person under the surface and all that bull**** he talks. I take my hat off to him that he’s killing it in boxing and business.”

Harper freely admits he’s banking on the “excitement and fear factor,” of facing the physically imposing Fowler to galvanize him in the absence of a crowd. But also says his opponent needs to prepare for a new level of intensity.

“I don’t think Fowler’s been in with anyone like me as a pro, who comes and brings it. I’m relentless in my pressure and I’d like to think I’ll be there to the end, punching, punching, on the front foot.

“I’m not going to pretend I’m going to be like Joe Calzaghe, it’s not my way. It’s all about being rough and ready. I’m coming to bring it. I’m not coming to get my belly tickled and I’m going to give it a real go.”

Harper’s also buoyed and emboldened by developments in his personal life during lockdown. He became engaged to his girlfriend, Molly, but only after he faced the daunting challenge of asking her father, Simon Goodwin – former Cheltenham and Southampton footballer – for his blessing.

“Hand on heart, I was more nervous about that than this fight. He’s a big lump and I went to see him, so I’ve already conquered that. The engagement question was the hardest thing I’ve ever done.”

Molly then has joined Harper’s brother, Michael in the fighter’s inner circle. His boxing career has played out against the backdrop of a previously painful personal life. Harper never met his father and then was estranged from his mother in his youth. Attempts at a full reconciliation have been complicated by her suffering the after-effects of a bleed on the brain.

“My mum is very poorly, still in hospital. Me and my brother think she may never recover. She still speaks to me on the phone. She knows I’m fighting again and she seems happy. Whether it’s registering with her or not, I’m not too sure. All I can really do is stay positive and I think she’ll be proud.”

Harper may be an underdog fighting for the first time in close to two years. But he likes the bookmakers’ odds for him to win at 12/1 and is urging those around him to lump on the long shot. But win, lose or draw he’s determined to leave his mark in Essex.

“It’s not about hype or social media. I just want to go in there and put on a great fight and try and elevate my career back. I’m not really fussed about the no crowd. There’ll be no excuses from me. The better man will win. Me or Anthony.”