Having worked with Roberto Duran and such successful Cuban boxers as Joel Casamayor, Yuriorkis Gamboa, Erislandy Lara and Guillermo Rigondeaux, DeCubas knows elite-level talent when he sees it. DeCubas believes David Morrell Jr. will become more than just the 24th world champion with whom he has worked.

The chief operating officer for Warriors Boxing, Morrell’s promoter, expects the powerful, skillful southpaw to become a star. Morrell will take the first significant step in his pro career Saturday night, when the 22-year-old Cuban prospect will battle Brooklyn’s Lennox Allen in a 12-round fight for the WBA interim super middleweight title. 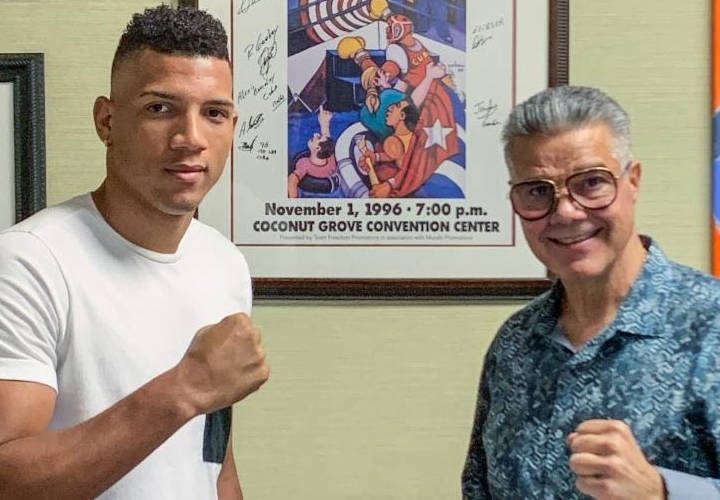 Morrell will fight for one of the WBA’s secondary 168-pound titles, but the accomplished amateur will face an experienced, unbeaten opponent in just his third professional fight. FOX will televise the 12-round bout between Minneapolis’ Morrell (2-0, 2 KOs) and Allen (22-0-1, 14 KOs) as part of a three-bout broadcast from Microsoft Theater in Los Angeles (8 p.m. ET/5 p.m. PT).

“This kid, to me, is a special type of fighter,” DeCubas told BoxingScene.com. “That’s the way I see it. He knows how to impose his will on guys. He reminds me a lot of a southpaw Carlos Monzon. He knows how to impose his will, and he can punch with both hands. He’s got the three Ds – dedication, desire and drive – which is very difficult to find in a Cuban athlete. Anybody that’s willing to come from the Caribbean and Cuba and that kind of environment, and go to Minnesota because that’s what’s best for him, and put up with 30 below zero, that tells me he’s got the three Ds. … You know, anything can happen in this game. But if I have to predict his future, I think he’s gonna be one of the great ones.”

Comparing Morrell to Monzon obviously is quite a compliment, as Argentina’s Monzon is revered as one of the best middleweights in boxing history.

Morrell has beaten only opponents who were a combined 17-12-2 in his first two professional bouts, yet he went 135-2 as an amateur and won numerous international tournaments. He then spent nearly a year and a half in Mexico while awaiting a P1 visa to enter the United States from Mexico City.

Morrell moved to Minneapolis because DeCubas lived there before relocating to South Florida many years ago. The promising prospect is trained by Sankara Frazier and Adonis Frazier, the father and brother of welterweight contender Jamal James.