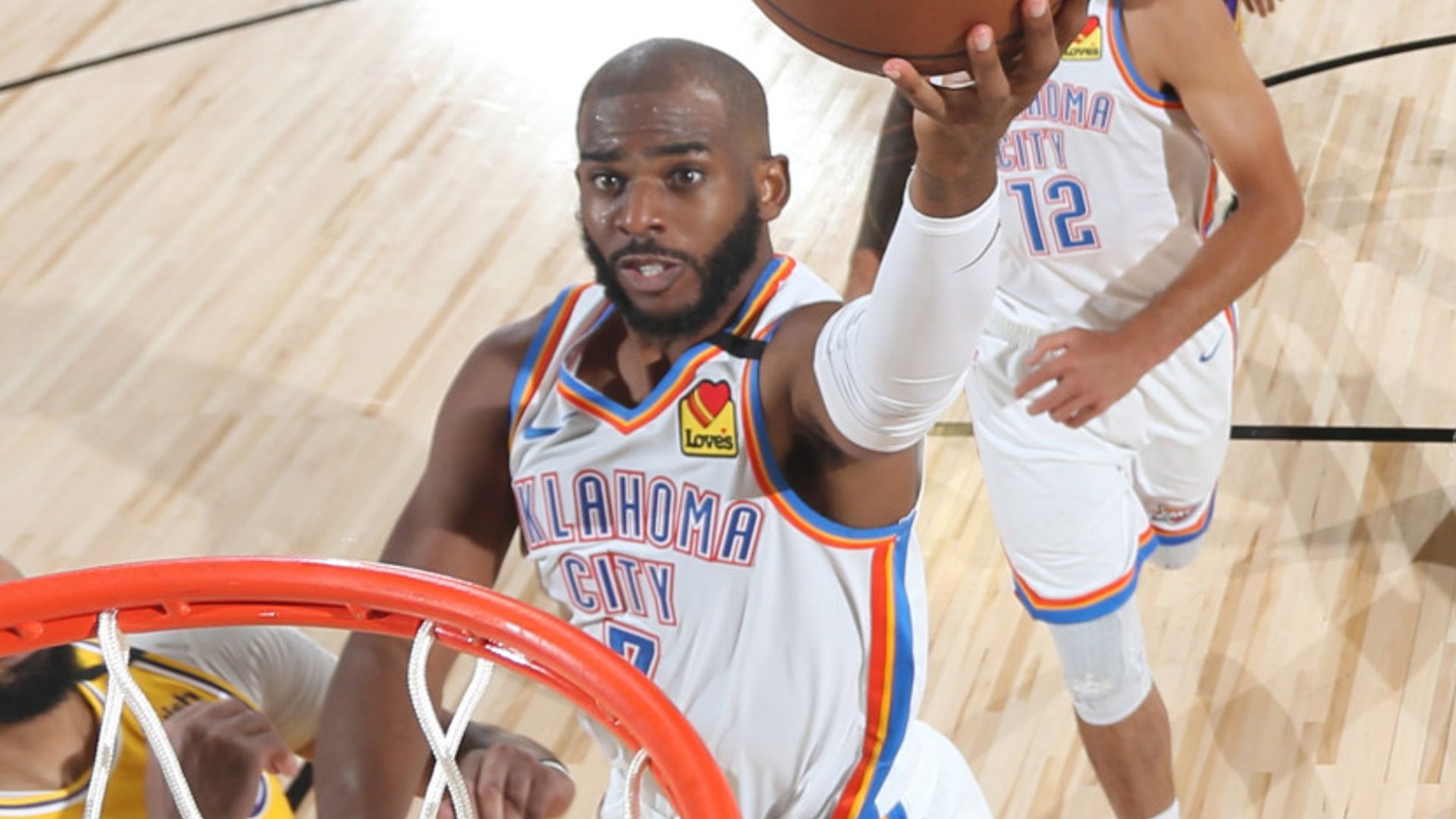 Chris Paul scored 21 points to lead the Oklahoma City Thunder to a 105-86 win over the Los Angeles Lakers on Wednesday night.

Chris Paul scored 21 points to lead the Oklahoma City Thunder to a 105-86 win over the Los Angeles Lakers on Wednesday night.

The Lakers had their worst offensive game of the season, with season lows in points and three-point percentage. Los Angeles were just 5-of-37 from behind the three-point arc, with the 13.5 per cent rate the Lakers’ worst since early in the 2017-18 season.

Danilo Gallinari added 19 points and Steven Adams 18 for Oklahoma City, who once again was playing without back-up point guard Dennis Schroder. LeBron James led the Lakers with 19 points and 11 rebounds.

Los Angeles didn’t find much offense outside of James, though. Anthony Davis, who had put up big numbers in the Lakers’ two wins over the last week, was in foul trouble for much of the game and finished 3-of-11 from the field for nine points.

Oklahoma City extended their lead to 20 late in the third quarter before the Lakers quickly trimmed the margin in half one minute into the fourth. But then the Lakers once again couldn’t get to the basket, settling for three-point attempts, and the Thunder scored nine consecutive points to extend their lead to a comfortable margin once again.

The Raptors (49-18) have won all three of their games since the restart near Orlando. The victory gave them a four-game season series sweep of the Magic.

The Magic, who never led and trailed by as many as 24 points, cut the deficit to seven points early in the fourth quarter. However, VanVleet’s three-pointer gave Toronto a 14-point lead with five minutes left.

Evan Fournier and Terrence Ross each had 15 points for Orlando (32-37). Nikola Vucevic added 12 points and nine rebounds, Wes Iwundu had 11 points and Gary Clark 10. Aaron Gordon had nine points and 11 rebounds before leaving in the third quarter due to left hamstring tightness.

Jaylen Brown scored a game-high 21 points as the Boston Celtics seized control in the first quarter and cruised to a 149-115 victory over the Brooklyn Nets.

The Celtics rested Kemba Walker and turned in perhaps their best defensive showing since the restart. They rebounded from a 112-106 loss to Miami on Tuesday, a game in which they never held a lead.

Jayson Tatum added 14 of his 19 in the third quarter when Boston led by as many as 30 points. Gordon Hayward fuelled the beginning of Boston’s surge and added 18 as the Celtics (45-23) moved two games ahead of Miami for third place in the East.

Jeremiah Martin led Brooklyn with 20 points, 18 in the fourth quarter. Brooklyn’s Joe Harris, Caris LeVert and Jarrett Allen returned from sitting out Tuesday’s game due to minor injuries and rest but could not get into a rhythm.

Joel Embiid scored nine consecutive points in a 13-0 Philadelphia burst that bridged the third and fourth quarters to help the 76ers post a 107-98 victory over the Washington Wizards despite losing Ben Simmons to a knee injury.

Embiid finished with game-high totals of 30 points and 11 rebounds for the 76ers (41-27), who won their second straight after beginning their Florida stay with a loss to Indiana.

The win might have been a costly one. Simmons left a tight contest with 5:46 remaining in the third quarter, favouring his left knee. He had grabbed an offensive rebound four seconds earlier. Initial reports from the locker room indicated there was no serious damage, but Simmons was not able to return to the game. He finished with eight points in 23 minutes.

Washington lost their fourth straight game at the Wide World of Sports Complex despite 19-point efforts from Thomas Bryant and Jerome Robinson.

Embiid connected on 11-of-20 field-goal attempts for the 76ers, who out-shot the Wizards 46.3 per cent to 42.4 per cent. Tobias Harris chipped in with 17 points while Josh Richardson added 15 and Shake Milton 14.

Bryant completed a double-double with a team-high 10 rebounds for the Wizards. Brown totalled 17 points while Ish Smith had 12 to complement a team-high six assists.

Joe Ingles scored 25 points and Mike Conley added 23 points to lift the Utah Jazz to a 124-115 victory over the Memphis Grizzlies.

Rudy Gobert added 21 points, 16 rebounds, and three blocks. Donovan Mitchell chipped in 18 points and seven rebounds. Ingles, Conley, and Mitchell combined for 18 assists. Utah (43-25) are 2-2 since the NBA restart and moved into fourth place in the Western Conference, a half-game ahead of the Houston Rockets.

Dillon Brooks scored 23 points and Jonas Valanciunas added 21 points and 14 rebounds to lead Memphis. Ja Morant added 20 points, nine assists, and six rebounds while Grayson Allen also chipped in 20 off the bench. The Grizzlies (32-37) lost their fourth straight game since the NBA restart. They are in eighth place in the West, one game ahead of the Portland Trail Blazers.

Utah ripped off an 22-1 run over the final five minutes of the second quarter to seize a 64-55 lead. Gobert paced the Jazz with three dunks during that spurt and Conley dished out five assists. The Grizzlies rallied in the third quarter and knotted it up at 70-70 on a three-pointer from Morant.

Michael Porter Jr scored 30 points and pulled down a career-high 15 rebounds while Nikola Jokic added 25 points and 11 assists as the Denver Nuggets defeated the San Antonio Spurs 132-126 at the VISA Athletic Center.

The win allowed Denver (45-23) to climb to within a half-game of the LA Clippers for second place in the Western Conference standings. The Spurs (29-38), who have lost two straight, remained in 10th place in the West and two games behind Memphis in the race for the eighth and final playoff spot in the conference.

The game was tied at 97 with 8:49 to play but Denver’s flowing inside-out attack was too much for the Spurs to handle down the stretch. The Nuggets took charge with Jokic hitting a bucket and dishing out three assists in a two-minute stretch which led to a 114-105 Denver lead.

Jerami Grant added 22 points for Denver with Monte Morris hitting for 19 and PJ Dozier scoring 12 for the Nuggets.