Emanuel Navarrete and Jessie Magdaleno are nearly set to challenge for a second divisional title.

When and where their fight takes place will depend on who is willing to raise the most money to present such an event.

A purse bid hearing has been ordered by the World Boxing Organization (WBO) for a fight between its two highest rated featherweight contenders, who will vie for the vacant 126-pound title. The purse bid will take place August 11 via Zoom conference call, to be conducted by WBO President Francisco ‘Paco’ Valcárcel from the sanctioning body’s headquarters in San Juan, Puerto Rico with all participants to join virtually in lieu of traveling due to the ongoing coronavirus pandemic.

“As per Section 11 through 14 of the enclosed copy of the WBO Regulations of World Championship Contests (www.wboboxing.com), please be advised that a Purse Bid will be held via “Zoom” video conference at 5:00 p.m. Eastern Standard Time (EST) on Tuesday, August 11, 2020, at the World Boxing Organization headquarter offices in San Juan, Puerto Rico,” Luis Batista-Salas, chairman of the WBO Championship Committee stated in an official letter issued to both teams, a copy of which has been obtained by BoxingScene.com. 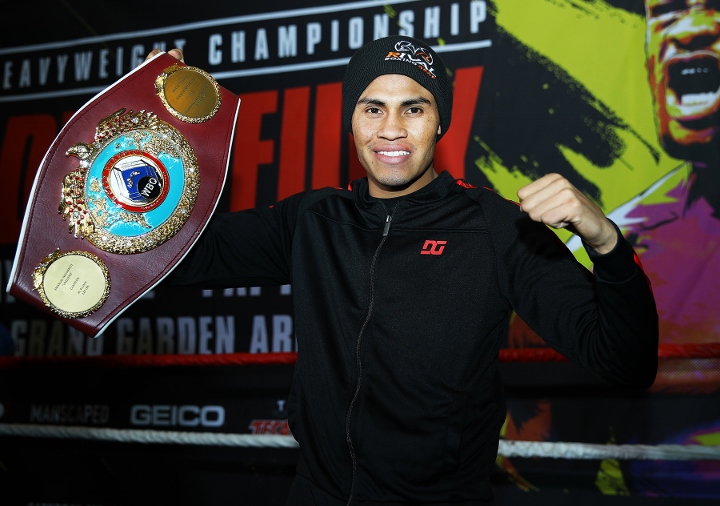 Both boxers are under the Top Rank banner, with the aforementioned notice submitted to company founder and Hall of Fame promoter Bob Arum on behalf of Magdaleno. Navarrete is co-promoted by Zanfer Promotions, headed by Fernando Beltran who was emailed such terms.

The virtual purse bid hearing will be open to all WBO-registered promoters, on the condition that they are prepared to present a minimum bid of $150,000. Such offer most also include a 10% deposit to be filed by the winning bidder immediately after the proceedings and with signed contracts provided no later than five (5) days after the session.

A deal can still be reached prior to the hearing. Otherwise, the winning bid will be split 50/50 between both boxers as per Section 13 (a), subsections (2) (A) (B), and (C) of the WBO Championship Rules. Should either side gain what is deemed to be hometown advantage for such a fight, the visiting boxer will then be entitled to the greater amount of a 60/40 purse split.

The belt became available earlier this summer, when prior WBO featherweight titlist Shakur Stevenson opted to move up in weight and compete as a junior lightweight.

Navarrete (31-1, 27KOs) was installed as the number-one contender in the first ratings update conducted by the WBO since the pandemic. The move came shortly after the 25-year old from San Juan Zitlaltepec, Mexico made his featherweight debut this past June. The moment came in a 6th round stoppage of countryman and journeyman Uriel Lopez, officially ending his WBO 122-pound title reign which began with a 12-round win over previously unbeaten Isaac Dogboe in December 2018.

Their rematch last May was far more one-sided, with Navarrete stopping Dogboe in the 12th round for the first of five successful title defenses. The run was crammed into a nine-month period, the last of which came in an 11th round stoppage of Joe Santisima on the undercard of Tyson Fury’s 7th round stoppage of Deontay Wilder in their heavyweight championship rematch this past February in Las Vegas.

Navarrete has scored six consecutive stoppage wins in all.

Magdaleno (28-1, 18KOs) enjoyed a 17-month stay as a WBO 122-pound titlist. The reign began with a 12-round upset decision win over Nonito Donaire in their November 2016 title fight. Just one successful defense followed, a 2nd round stoppage of Brazil’s Adeilson Dos Santos in April 2017 before conceding the crown to Dogboe one year later via 11th round technical knockout in their April 2018 Fight of the Year-level war.

The title losing effort was the last piece of business at junior featherweight for Las Vegas’ Magdaleno, who has now scored three straight wins at featherweight. The most recent came in a 10th round disqualification win over Yenifel Vicente this past June in his Las Vegas hometown. It came at the right time, as Magdaleno was the highest ranked WBO featherweight contender at the time to have fought during the pandemic.

It allowed him to advance in the rankings upon the latest update, where he landed at number two behind—leapfrogging Salinas, California’s Ruben Villa (18-0, 5KOs) and England’s Ryan Walsh (26-2-2, 12KOs), whom were previously ranked two and three. Michael Conlan (13-0, 7KOs) was the number one contender prior to the pandemic, but has since opted to drop down to 122 pounds, and was replaced by Navarrete who obtained the top spot through his status as a WBO champion opting to move up in weight.

A similar development allowed Stevenson (14-0, 8KOs) to be installed as the number-one contender at junior lightweight upon vacating the 126-pound title at stake for this forthcoming contest.