Carl Frampton needs a new opponent for his upcoming fight.

BoxingScene.com has learned that Vahram Vardanyan has withdrawn from their 10-round junior lightweight fight scheduled for August 15 at BT Sport’s Studio in London. Vardanyan (21-1-1, 14 KOs) pulled out of the Frampton fight due to a visa issue that would’ve prevented him from entering England next week.

The Armenian-born Vardanyan resides in Riga, Latvia. Frampton’s handlers were in the process Thursday of trying to secure a new opponent.

“It is what it is,” Frampton told BoxingScene.com on Thursday. “I feel like I’m a pretty positive person. These things are out of my control. I just have to deal with it, and that’s what I intend to do. I still don’t know who I will be fighting. I’m sure they will get an opponent for me for the 15th, but at this point in time I’m not sure who it’s gonna be and I’m sure which weight it’s gonna be. I imagine an opponent coming in at a week’s notice is not gonna be able to make 130 [pounds].” 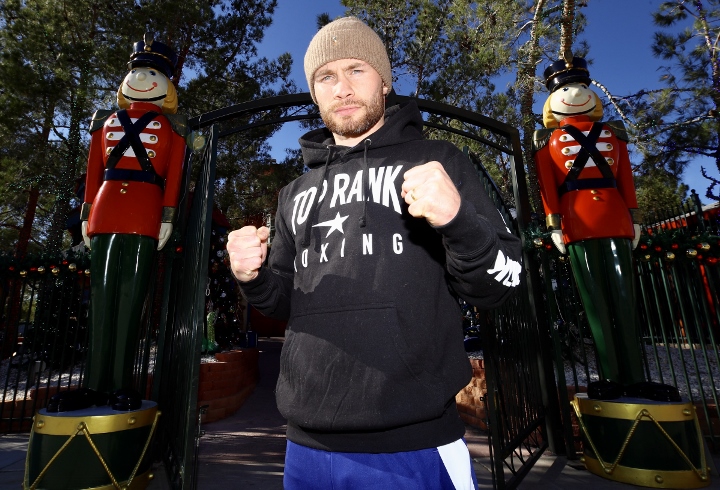 Whoever Frampton fights, his return to the ring will headline a BT Sport broadcast in the United Kingdom and an afternoon telecast on ESPN in the United States. If Northern Ireland’s Frampton wins his upcoming bout, he is expected to meet Jamel Herring next, assuming the heavily favored Herring (21-2, 10 KOs) successfully defends his WBO junior lightweight title against Jonathan Oquendo (31-6, 19 KOs) on September 5 at MGM Grand Conference Center in Las Vegas.

The Herring-Frampton fight tentatively was scheduled for June 13 in Frampton’s hometown of Belfast, but the outdoor event at Windsor Park was canceled due to the COVID-19 pandemic.

The 33-year-old Frampton (27-2, 15 KOs), a former WBA/WBO featherweight and IBF/WBA junior featherweight champion, will box for the first time August 15 since soundly defeating Tyler McCreary on November 30 in Las Vegas. Frampton won every round on all three scorecards and recorded two knockdowns against McCreary (16-1-1, 7 KOs) in a 10-rounder that took place at The Cosmopolitan.

The August 15 show headline by Frampton will include Michael Conlan as well.

Ireland’s Conlan (13-0, 7 KOs) is scheduled to face France’s Sofiane Takoucht (35-4-1, 13 KOs) in a 10-round bout. The 28-year-old Conlan, a 2016 Olympian, recently announced that he has moved down from the featherweight division to junior featherweight.

Conlan avenged his controversial Olympic loss to Russia’s Vladimir Nikitin in his last bout. He beat Nikitin (3-1, 0 KOs) by unanimous decision in their 10-round featherweight fight December 14 at Madison Square Garden in New York.

Conlan was scheduled to battle Colombia’s Belmar Preciado (20-2-1, 13 KOs) in the main event of a March 17 card at Madison Square Garden’s Hulu Theater. That St. Patrick’s Day show was scrapped just five days in advance due to the pandemic.