The summer of 2020 was intended to be a season of triumph for Natasha Jonas. The Liverpool fighter was scheduled to tackle Terri Harper for the WBC super-featherweight strap in April, but the coronavirus pandemic that temporarily thwarted all sport among other things placed Jonas’ lofty aspirations on hold.

With the fight set for week two of Matchroom’s Fight Camp this Friday, “Miss GB”, relieved her title opportunity is still going ahead, reveals her frustrations at the contest’s original cancellation.

“It got to the point where I didn’t think the fight would happen,” admitted Jonas when speaking to Sky Sports. “The chance to fight Terri pretty much came out of nowhere. I wasn’t mandatory or next in line for her so getting the shot was something of a surprise.

“No one was really sure what would happen with boxing when the pandemic kicked off so I was hoping my fight would be okay, but when it got called off, I did think that my chance might’ve gone.

“I’ve had more time to prepare this time around and you’ll see the very best version of me on Friday night.”

Despite initial world title celebrations being placed aside, Jonas’ time during lockdown was not wasted. With the mainstream media moving their attention from coronavirus to the death of George Floyd in Minneapolis, the Black Lives Matter campaign gained monumental momentum. 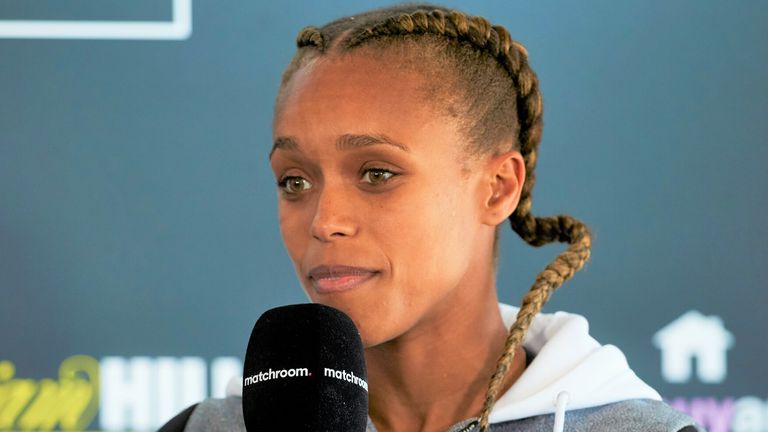 I had to speak out on it being a black person, but it should be something that every single person regardless of their race should speak out on.

Jonas used her various social media profiles to declare her passionate stance on the subject, and although the movement gained major traction earlier this year, it has been a topic close to Jonas’ consciousness for a while longer.

“I had to speak out on it being a black person, but it should be something that every single person regardless of their race should speak out on.

“I’m not gay, but I make a point of going to the Pride events that take place because I feel it’s my duty to do what’s right and not to discriminate against someone.

“I’ve experienced racism growing up and even now I sometimes think to myself if I’m being used for certain events just because I’m a black face.

“I’m preparing my daughter for this world the same was my mum prepared me and the way my nan prepared her. It’s wrong that I have to do that, but this is the world that we live in at the moment so I’m always going to speak out if I believe I can help change it.”

With a chaotic period of uncertainty now behind her, Jonas’ immediate focus is fixed on Harper and relinquishing the Doncaster boxer of her prized possession.

After occupying the heights in the amateur code with various outings at all major championships including the 2012 London Olympics, Jonas is desperate to replicate her unpaid form in the professional code.

A loss to Viviane Obenauf two years ago seemingly closed the door on Jonas’ title quest, but three wins since have paved the way towards a domestic showdown with Harper. Jonas insists that she will be doing everything possible to leave the Matchroom mansion as world champion.

“This is like the Olympics all over again for me.

“It’ll mean so much to me to become world champion and I can honestly say that this has been the best camp of my career, and everything with Joe (Gallagher) has gone to plan so well.

“My sparring has been great, I’ve prepared for 10 hard rounds, and I’ve made sure I’m the fittest I’ve ever been.

“One thing I’ll say about Terri is that she’s a very fit fighter with a good work-rate and I know they’re banking on me not being as fit as her. They’re in for a massive shock.

“I’ve done all the hard work and I just want the fight to be here now so I can become the new world champion.”