Ra’eese Aleem doesn’t want to hear any more excuses the next time his name surfaces in a conversation regarding title fights.

The unbeaten junior featherweight contender strengthened his case to compete at the top level following his latest performance. Aleem impressed home viewers in a 10th round stoppage of Marcus Bates in their Showtime-televised rematch Saturday evening at Mohegan Sun Casino in Uncasville, Connecticut.

“My next fight will be for a world title,” Aleem (17-0, 11KOs) insisted to BoxingScene.com. “A lot of these guys in the 122-pound division have been ducking and dodging me. Now, they will have no choice but to fight me.” 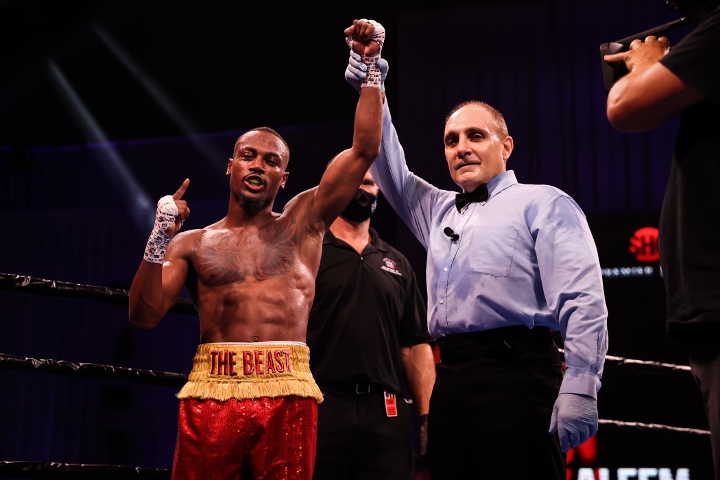 Both fights represented late replacements—Leo was due to face Stephen Fulton (18-0, 8KOs), who was forced to withdraw after testing positive for COVID-19. The unbeaten Philadelphia-bred contender was replaced by Williams, the previously unbeaten New Haven-based southpaw who was originally due to face Aleem in the evening’s chief support before receiving an upgrade to the main event.

Aleem was able to remain on the card, as the unbeaten Las Vegas-based contender—originally from Muskegon, Michigan—faced Bates, the stand-by replacement whom Aleem previously decisioned over eight rounds in their April 2018 affair. The rematch was far more dominant, ending with Aleem landing a final left hand on a fleeing Bates who held his right arm in pain from an injury suffered earlier in the bout as referee Gary Rosato rescued him from additional punishment.

The impressive performance came in spite of Aleem’s weeks-long preparation to face a southpaw opponent in Williams. It was a scenario he considered ideal given his next targeted opponent—unified WBA “Super” and IBF junior featherweight titlist Murodjon Akhmadaliev (8-0, 6KOs).

“I want to collect all of the belts in the division – Akhmadaliev has two, so I want to start there,” notes Aleem, who has now scored six straight stoppage wins dating back to September 2018. “He’s a southpaw and he’s been on my radar. Akhmadaliev, [unbeaten WBC titlist Rey] Vargas, (Leo), Brandon Figueroa (WBA “Regular” 122-pound titlist)—I want to fight them all.”