Earlier this week, promoter Frank Warren challenged his British rival, Eddie Hearn, to come together in order to match their best fighters against each other.

“How about lighting the touch paper and really bringing British boxing back with a bang? The time is right to throw off the shackles and truly give our sport a proper shot in the arm. What I am proposing is to break down the borders and give the fans the fights they want to see,” Warren said.

“Let’s make the natural matches that have previously been deemed too complicated due to promotional and broadcast affiliations. Queensberry’s finest versus the best of Matchroom. Why not? The prospect of the best of British getting it on would reinvigorate the sport, increase the subplots and really get people talking about the game again.

“Forget about promoter pride and egos, it is not about us. This is the time to turbo-charge boxing right back into the mainstream and capture the imagination of the watching public. People talk about various industries resetting following the traumas this year has inflicted on the world. Well, this is our chance to do just that. You can call it my 2020 vision.” 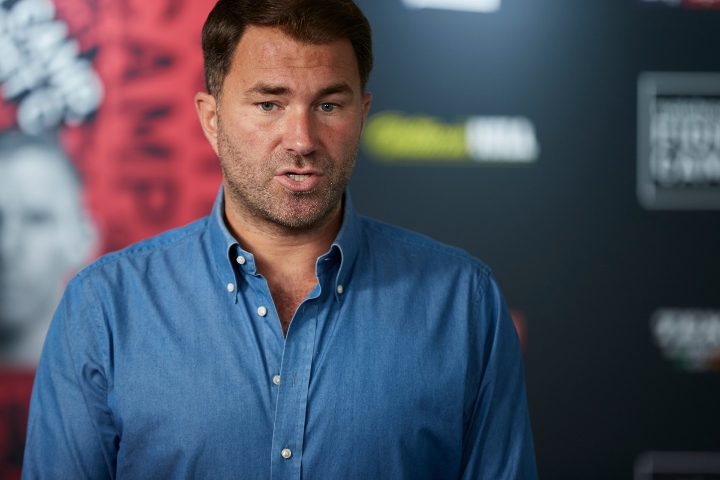 That challenge led to a rare phone conversation between the two promoters.

“I gave him a buzz and said later in August or September we can have a chat and a bite to eat,” Hearn told IFL TV.

“I’m focused on saving boxing. The sport is in a horrendous position.”

Hearn admits the two of them should have met to discuss business a decade ago.

“There is a lot to discuss, we’re a million miles away from making any fights but I’ve no problem having a bit of grub and discussing it,” said Hearn.

The biggest fight the two of them could make is a full division heavyweight unification between IBF, IBO, WBA, WBO champion Anthony Joshua (promoted by Hearn) and WBC champion Tyson Fury (promoted by Warren).

Fury has to deal with a contracted trilogy fight against Deontay Wilder on December 19th. Joshua has a mandatory defense, against Kubrat Pulev, being targeted for the same month.

“The main thing to focus on is AJ against Fury and although [Top Rank’s CEO] Bob Arum [Fury’s co-promoter in the US] is dealing with that, I’ve got no problem talking to Frank as well,” said Hearn.

“That’s the priority. The other stuff is great and those fights can get made, but that fight will open the door.”