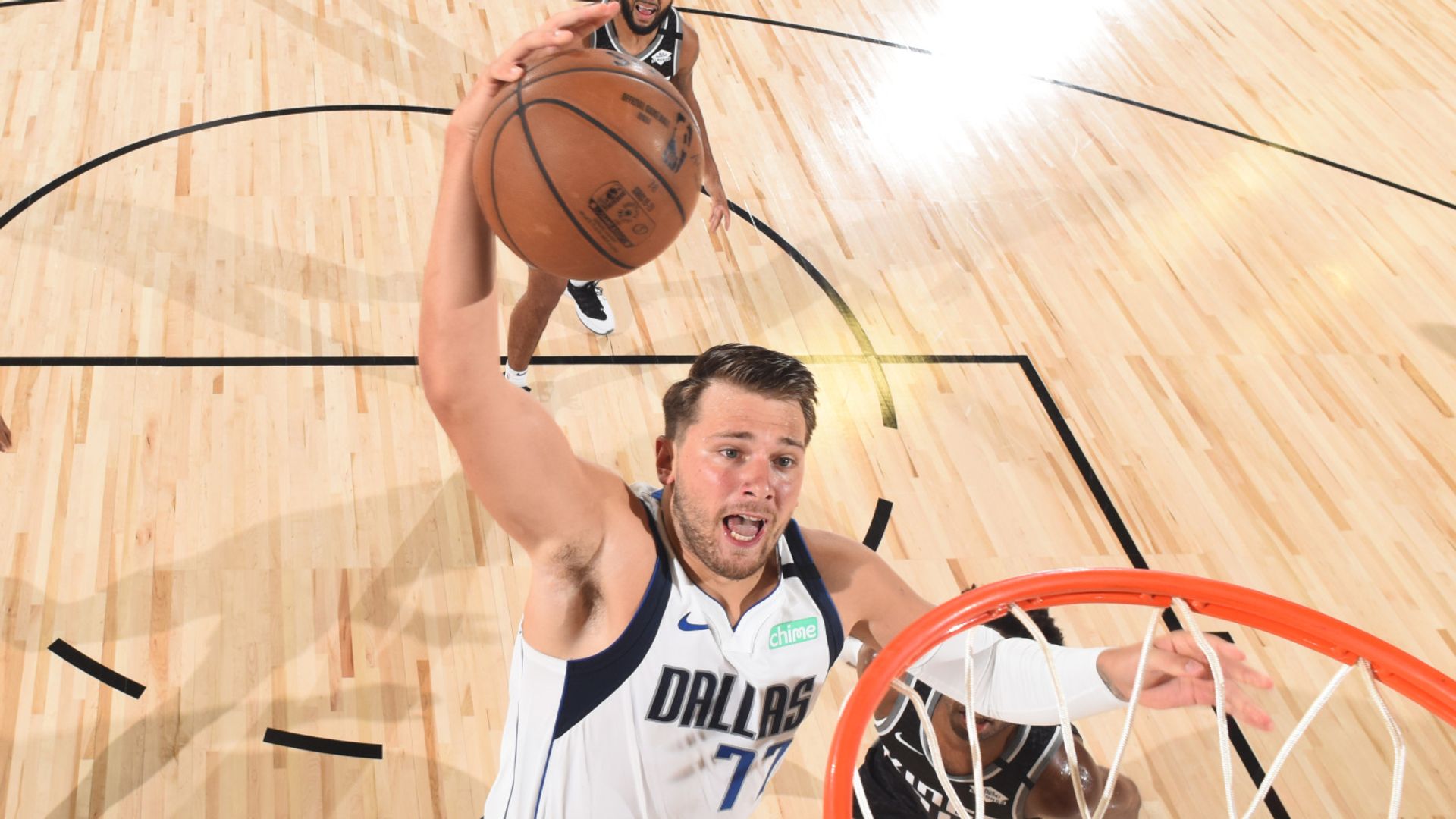 Luka Doncic became the youngest player in NBA history to record a 30-point, 20-rebound triple-double in a game as he led the Dallas Mavericks to victory over the Sacramento Kings.

Luka Doncic became the youngest player in NBA history at 21 years, 158 days old to put up 30 points, 20 rebounds and 10 assists in the game as the Dallas Mavericks outlasted the Sacramento Kings in a 114-110 victory on Tuesday night.

The Slovenian glossed a 34-point, 20-rebound, 12-assist triple-double with a basket to break a tie with 1:57 remaining in overtime.

Tim Hardaway Jr. had six of his 22 points in the extra session, helping the Mavericks (41-29) win for the first time in three tries since the NBA restart.

De’Aaron Fox went for a team-high 28 points for the Kings (28-39), who fell to the brink of elimination in the Western Conference playoff race with a third straight defeat since the restart.

The Kings led almost the entirety of regulation, using nine first-quarter three-pointers to build a 37-27 advantage after 12 minutes.

Dallas rallied into a 52-all tie thanks to a pair of free throws by Kristaps Porzingis with 2:46 remaining in the half, but then never drew even again until Kleber hit one of two foul shots with 1:52 remaining, squaring the score at 95-all.

The teams combined for seven missed shots and a turnover over the scoreless final 1:52 of regulation. Fox missed three of the shots, including a buzzer-beating 18-footer.

Doncic’s triple-double was his league-leading 16th of the season, while his 20 rebounds were a career high, eclipsing his previous best of 18 set against New Orleans in December.

Timothe Luwawu-Cabarrot scored a career-high 26 points and hit two clutch three-pointers down the stretch to help the Brooklyn Nets pull out the win over the Milwaukee Bucks.

Luwawu-Cabarrot hit eight of 12 from the field and made five three-pointers, while Garrett Temple added 19 for the Nets, who played without Jarrett Allen (rest), Joe Harris (lower back/right hamstring) and Caris LeVert (left thigh contusion).

Brooklyn also lost Jamal Crawford early in the second due to a left hamstring injury after he played six minutes.

Giannis Antetokounmpo scored 16 points and rested for the second half in a predetermined move by Milwaukee coach Mike Budenholzer, who also rested Khris Middleton in the second half. Kyle Korver added 13 as Milwaukee lost for the sixth time in eight games dating to March 1.

Devin Booker’s buzzer-beating, turnaround jumper as time expired capped a 35-point effort as the Phoenix won its third straight to open the bubble restart, knocking off the Los Angeles Clippers.

Cameron Payne finished with 12 points off the bench and was one of five Suns to score in double figures.

The Clippers shot a dismal eight of 29 from long range, with Kawhi Leonard going two of four from outside en route to a team-high 27 points and JaMychal Green also shooting two of four beyond the arc for 10 points.

No other Clipper made more than one three-pointer.

Paul George, whose 23 points were second on the team, finished one of seven from behind the three-point arc and six of 17 from the floor in total.

Bam Adebayo produced a double-double with 21 points and a game-high 12 rebounds to lead the Miami Heat to a win over the Boston Celtics.

The Heat played without leading scorer Jimmy Butler, who sat out due to a sore right ankle, but Miami improved to 6-6 without him.

Miami also got 21 points from Duncan Robinson and 20 from reserve point guard Goran Dragic. However, Dragic left the game with five seconds left due to a left ankle injury.

CJ McCollum contributed 20 points and seven rebounds, and Jusuf Nurkic added 18 points, 19 rebounds and three blocked shots for the Trail Blazers, who moved within 1 1/2 games of the eighth-place Memphis Grizzlies in the Western Conference race.

James Harden recorded 23 points and nine assists for the Rockets, who are tied with the Utah Jazz for the fourth-best record in the West. Russell Westbrook tallied 15 points as his streak of consecutive 20-point performances ended at 36.

Gary Trent Jr knocked down his fourth three-pointer of the game to give the Trail Blazers a 103-100 lead with 2:53 remaining.

Nearly two minutes later, Carmelo Anthony nailed a three-pointer to give Portland a 107-102 edge, before Lillard hit two free throws for a seven-point lead with 24.9 seconds to play as Portland closed it out.

In comparison the Rockets shot 39.1 percent from the field and were 19 of 53 from behind the arc. Jeff Green made five three-pointers and Danuel House Jr sank four, but Houston suffered its first loss in three games in the restart.

T.J. Warren made his first eight field-goal attempts on his way to 32 points as the Indiana Pacers led the Orlando Magic wire to wire.

Warren continued his red-hot scoring touch since the season restarted from the COVID-19 hiatus, taking his points tally to a franchise record 119 over three games amid Indiana’s perfect record since the resumption.

Myles Turner added 21 points, and Victor Oladipo chipped in 13 points in his return to the lineup after a scheduled rest on Monday.

Nikola Vucevic led the Magic with 24 points and grabbed 10 rebounds. Aaron Gordon added 20 points, and Terrance Ross delivered his second 20-plus-point effort in as many games off the bench with 20 – all of which came in the second half.