Ryan Walker has urged Lee McGregor to be at 100% when they meet later this month – as he doesn’t want there to be any excuses if he is victorious over the Scottish star.

Former Southern Area super-bantamweight champion Walker (11-1, 2 KOs) faces British and Commonwealth bantamweight champion McGregor (8-0, 6 KOs) at 122lbs on a #MTKFightNight at Production Park Studios in in Wakefield on August 26, live in the US on ESPN+ in association with Top Rank and worldwide on IFL TV.

Both men have attempted to play down the recent war of words they were involved in on social media, but Walker has made it clear that he wants McGregor to be at his very best on fight night, in order to make a potential win even more sweeter.

Walker said: “I’m really looking forward to this. I’ve been working hard for a long time to get this opportunity to get on a big platform and show my skills.

“A lot of people might not know of me just yet because I’ve come up the hard way through small hall shows, but now is the time to show what I’m made of.

“I’m expecting a good fight. I hope he comes into the ring 100% so I can get the best Lee McGregor. I’ve seen things I can exploit and I will show him on the night. I’m a real fighter so all that social media stuff doesn’t mean anything to me.

“I’ve been fighting at super-bantamweight my whole career so I’m confident at that weight. On the night I’m going to be a lot bigger than what he is expecting. I don’t believe much in weight advantage in boxing though, you’ve got to know how to fight, that’s all that matters.” 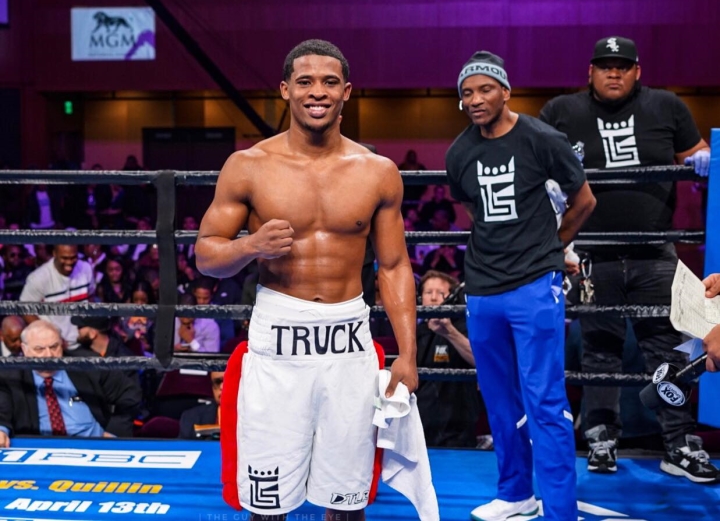 The move will see MTK Global work alongside Simpson’s uncle and manager Raheem – and his management company Xquizit Sports.

Baltimore’s Simpson (8-0, 5 KOs) has taken the world by storm following his professional debut in 2018, and will now become MTK Global’s first American-born signing.

The 20-year-old has won all eight of his contests in very impression fashion, with five of those victories coming by knockout.

He had an incredible amateur career, earning several national titles along the way, and he is also the nephew of former world heavyweight champion and boxing legend Hasim Rahman.

The super-welterweight star has been widely tipped to achieve big things in the sport, and he’s excited for the future after taking the next step in his career.

Simpson said: “I’m really pleased to sign an advisory deal with MTK Global. They manage a number of incredible fighters such as Tyson Fury, Billy Joe Saunders, Josh Taylor and more, so to be part of the same team as those guys is great.

“I’m unbeaten in my professional career so far, and now with my uncle Raheem and Xquizit Sports working with MTK Global, I’m looking forward to seeing where we can go from here.

“I boxed around the world as an amateur, so hopefully with this new deal that can happen again and fans from all over the globe can see me in action.”

Raheem said: “It’s an honour to be working with MTK Global as they sign this advisory deal with Lorenzo. We’ve guided his career to where it is today and now we’re thrilled about what opportunities are set to open up with this new venture.

“I’ve had high hopes for Lorenzo for a long time, and with him only being 20-years-old I’m confident that he has what it takes to become a superstar in this sport for years to come.”

MTK Global CEO Bob Yalen added: “We’re proud to be welcoming Lorenzo Simpson to the team. We’re always striving to work with the best boxers in the world and we truly believe that he is destined to reach those heights.

“We’ve expanded into America recently with the unveiling of the MTK Tuscon Gym, and with other moves in the USA on the horizon soon, we’re certain that Lorenzo can spearhead our presence in the country and become a huge name.

“He’s clearly a very exciting fighter and brings with him a superb amateur pedigree, so I urge fans to keep an eye on his progression because he’s definitely capable of achieving plenty of success.”

Simpson is set to return to the ring later this month, taking on fellow unbeaten fighter Sonny Duversonne live on CBS Sports, in what is expected to be yet another can’t-miss fight.

26-year-old east Midlander, Chad Sugden, takes his first step up the championship ladder when he confronts the unbeaten and towering Birmingham  Shakan Pitters in a spicy looking showdown for the vacant British title at a purpose built production studio in Redditch on Saturday 22nd August, exclusively live on free-to-air Channel 5.

‘2Slick’ Sugden is a fighting man to the core and hails from one of the nation’s most renowned combat families and is intent on becoming the first man to beat Pitters and claim the Lonsdale belt.

‘My Dad Dean was a world kick boxing champion and I was taking classes in both kick-boxing and boxing from the age of five. My brother Regis is an unbeaten pro welter and another younger brother Bailey is heavily involved in K1, competes in ‘Glory’. We’re a proper fighting family. Don’t mess!’ warns the solid 6ft Sugden who earned his opportunity after just 65 pro rounds and 13 fights (one draw, one loss).

‘I started competing in light contact martial arts at eight or nine, had my first amateur boxing bout at just 11 and pursued both sports alongside each other during my teens. But I always loved boxing more. That’s what I watched on the tele and my idols were boxers as opposed to martial artists. Most of my wins in kick-boxing were down to my hands. I always sparred pro boxers, to keep my hands sharp.’

‘I had 20 odd amateur fights, got beat in a national junior final and won the Senior Midland ABAs. At 17, I didn’t think I was quite ready to box professionally but accepted a pro kick-boxing contract. When the ABA got wind that I was fighting for money they revoked my amateur boxing card.’

Combining fists and feet, chiller Chad scooped an ISKA world title, starred in the US, Middle East, Asia and all over Europe and scored five figure purses.

‘I got used to doing all the press conferences and fighting away from home as an underdog, before huge, fanatical audiences – all experiences that transfer over,’ he states.

‘But I always knew professional boxing was where I wanted to go. The exposure was that much greater. I’d been struggling for a bit with a stress fracture at the bottom of my spine and all the kicking wasn’t helping it. At 21, I finally took the plunge.

‘With boxing, there’s less weapons to worry about, two less limbs to avoid and the martial fights were shorter, five rounds maximum. Though the kick-boxing is a bit jumpy, darting in and out of range, you had to plant your feet for K1 or you get wiped out.’

After converting to conventional pugilism four years ago, Sugden acclimatized with 10 fights against predominantly imported journeymen but has sizzled since stepping up in competition over the past eight months.

However, it was Sugden’s spirited eight round draw against world rated ex British title challenger Craig Richards at the York Hall last December –  Sugden’s first fight outside the Midland small halls – that alerted the cognoscenti of his championship credentials.

‘Billy Joe Saunders had broken my nose with a big uppercut in sparring but I couldn’t turn Craig Richards down,’ claims Chad

‘The nose went again in round two and, after that, I just had to focus on nicking rounds. While I can still see and my arms are still working, I’ll fight, man.  Craig says he was robbed but no one else was saying that. Though I thought it was close on the night, when I watched it back I thought I edged it by a round.’

Co-coach John Costello, who steered Jamie Cox to a world title challenge, works with Sugden twice weekly at his Birmingham gym and is astonished by the Newark warrior’s innate ruggedness.

He claims: ‘I believe Chad’s the youngest Brit ever to secure a K1 contract and often he’d be required to fight three times a day.

‘He’s very strong physically and ridiculously tough; very resilient and absorbent.  Jamie used Chad as his main sparring partner for his fight with George Groves. Jay dropped all the others but just couldn’t catch Chad clean.

‘Then Chad came into the Craig Richards fight on two weeks’ notice without any sparring because of his broken nose. When it went again in round two, he couldn’t breathe through his nose. Lasting the course was a victory in itself.’

Largely unknown before he was pitched with Pitters for the coveted Lord Lonsdale belt, strongman Sugden intends to announce himself spectacularly to the live national Channel Five audience.

‘I’m an old school, all round operator; a slick, aggressive counter puncher who moves well. I fight every fight differently,’ he disclosed.

‘I bring a presence to the ring. I’m very strong. I’m not the biggest knockout puncher but I’ve stopped a few with body shots.

‘I definitely want to defend the belt three times then move on. I’ve aspirations of European and world titles. The British light-heavyweight scene is so strong at the minute. If you’re a player here, you’re a player at world level.’

Warren Hopes Wilder Takes Less Than $20 Million To Step Aside

‘Clubs could be made strictly liable for fans’ conduct’