It wouldn’t be how he’d want to land his first world title fight, but Mykal Fox is ready anyway.

BoxingScene.com has learned that Fox would be Premier Boxing Champions’ replacement for Thomas Dulorme or Jamal James if either welterweight were to test positive for COVID-19 or were otherwise unable to fight Saturday night in Los Angeles. Las Vegas’ Dulorme (25-3-1, 16 KOs) and Minneapolis’ James (26-1, 12 KOs) are scheduled to fight for the WBA interim welterweight title in the main event of FOX’s three-bout broadcast, which will start at 8 p.m. ET/5 p.m. PT from Microsoft Theater.

As part of PBC’s protocols for all of its upcoming shows on FOX and Showtime, Fox has agreed to fight Dulorme or James on short notice if either fighter falls out of the 12-round main event. All 14 boxers scheduled to appear on that card Saturday night are slated to take their final pre-fight COVID-19 tests Friday. 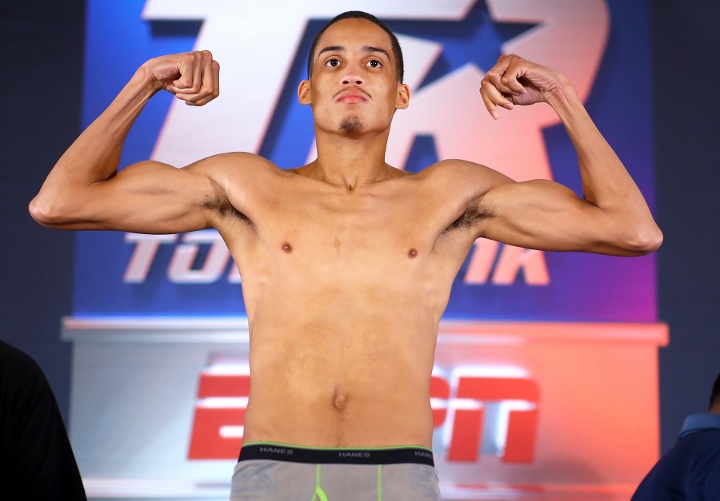 The 24-year-old Fox (22-1, 5 KOs), of Upper Marlboro, Maryland, is scheduled to face Lucas Santamaria (10-1-1, 7 KOs), of Garden Grove, California, in a 10-round welterweight bout on the Dulorme-James card. Fox-Santamaria will be the last of three fights FS1 will air after FOX’s coverage of the three-bout broadcast headlined by Dulorme-James.

Fox is ranked 13th by the WBA at 147 pounds and thus would be eligible to fight for the interim welterweight title for which the fifth-ranked James and the 10th-ranked Dulorme are set to compete. Manny Pacquiao (62-7-2, 39 KOs) is the WBA’s legitimate welterweight champion.

Al Haymon’s PBC and TGB Promotions put its contingency plan to use immediately last week while quickly rearranging its first show since the COVID-19 pandemic temporarily halted the boxing business in mid-March.

Before he took that title fight on three days’ notice, Williams was supposed to face Ra’eese Aleem in Showtime’s co-featured bout before the Fulton-Leo match. Marcus Bates replaced Williams as Aleem’s opponent in a 12-round, 122-pound WBA elimination match Aleem (17-0, 11 KOs) won by 10th-round technical knockout after Bates (11-2-1, 8 KOs) suffered an injury to his right wrist.