The only thing missing Saturday night for Eddie Hearn was raw reactions from a crowd during what he considers one of the best action fights the British promoter has ever witnessed live.

Ted Cheeseman and Sam Eggington thoroughly entertained television and streaming audiences in a 12-round, brutal battle Cheeseman won by unanimous decision in Brentwood, England. Both brave Brits left the ring set up in the backyard of Matchroom Boxing’s headquarters lumped up, having provided plenty of memorable moments in their junior middleweight match.

“What a f–king banger,” Hearn told IFL TV following Matchroom’s first show in the United Kingdom since March 7. “Unbelievable. So proud of the fighters, of our team from just putting together an unbelievable spectacle event. Production, oh man, fights. Just witnessed probably one of the best fights I’ve ever seen live. I mean, you imagine if that fight had a crowd as well? I mean, for me, it’s one of the best fights I’ve seen live. And those boys deserve so much credit. You know, I know Ted will be looking to move on. I’d love to see it again.” 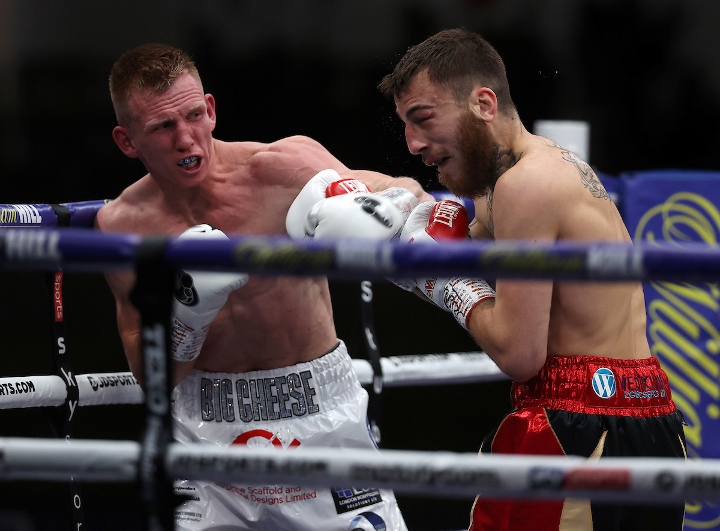 Cheeseman staggered Eggington with a right hand in the final minute of the second round, boxed well and was in control until their brawl broke out late in the sixth round. Eggington caught Cheeseman with a left hook that made him back off late in the sixth, and the action remained intense until the final bell.

They traded hard shots during an action-packed 12th round, when Eggington stunned Cheeseman with a left hook.

“Imagine that fight with 10, 15,000 at the O2 [Arena in London] or in Birmingham,” Hearn said. “Would’ve been incredible. So, you’ve gotta remember that, you know, even with no crowd, how great that fight was. And we’ve gotta give a lot of respect to those guys. I’d love to see it again. You know, I know Ted will wanna move on. Now he’ll probably be ranked in the top 10 with the IBF, but I would love to see that fight again. And for Sam Eggington, for me, that was one of the best performances of his career. I thought he boxed really well. Made a couple of mistakes and got hurt. But come back and he had Ted rattled in the 12th round. I’m pleased for Ted, you know? He’s coming off a couple decisions that could’ve gone the other way and he could’ve won. I did feel like he deserved to nick that fight tonight. It was a close fight, but I thought it was a great performance from him.

“And massive respect to Sam. Sam’s 26. You go away now, maybe come back with a little fight at the end of the year. I think he’s still got a big future in the sport. So, massive respect to those guys. You know, without those guys putting it on the line like that, we can’t deliver the product that we want to. So, ‘Fight Camp,’ it’s all great. Fireworks and ring walks and all this sort of stuff. But without those guys in the ring, putting chips in like that, we’re nothing. So, they deserve a lot of respect. And listen, tonight couldn’t have gone better.”