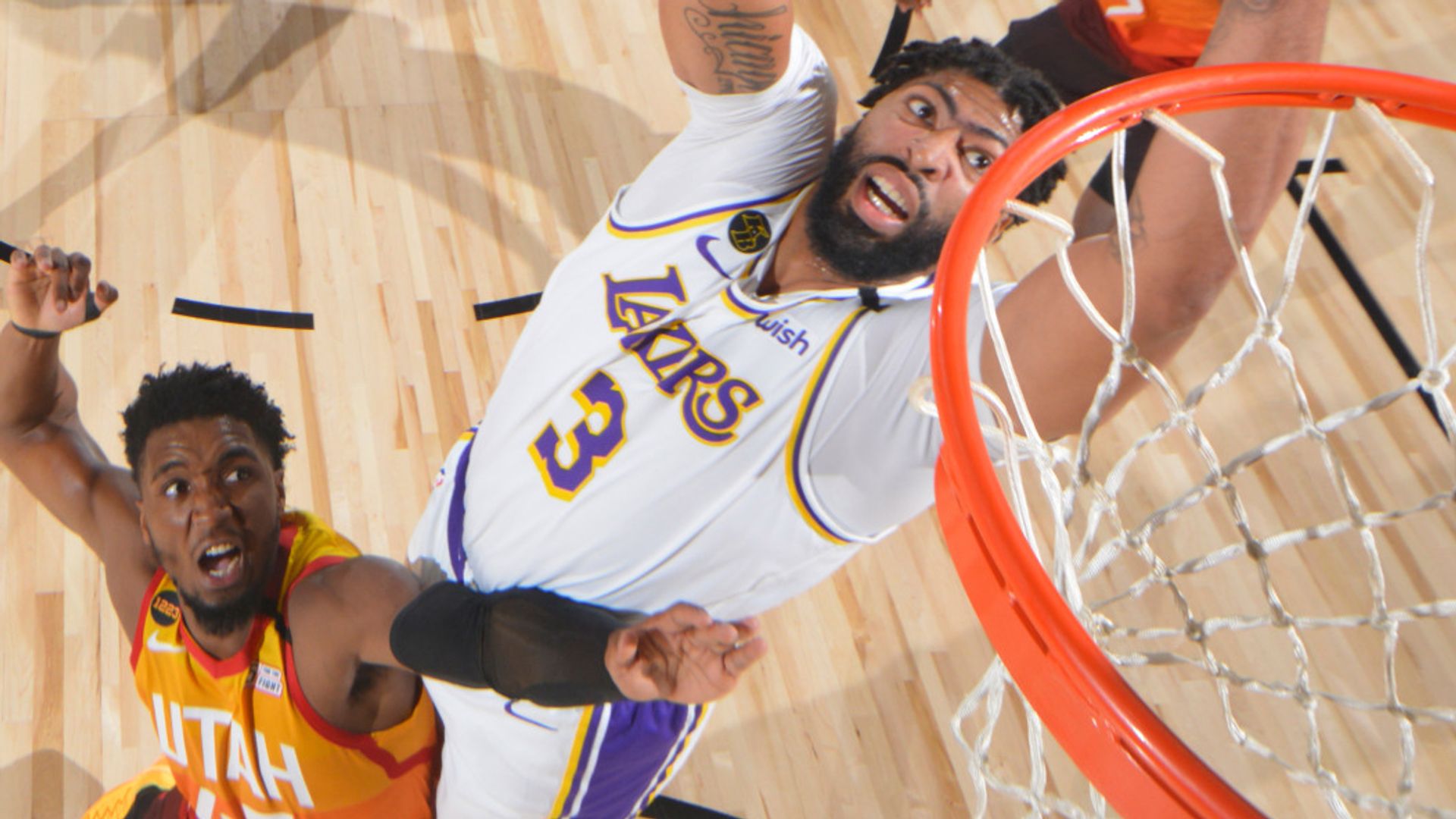 Anthony Davis scored 42 points and grabbed 12 rebounds as the Los Angeles Lakers clinched the No 1 seed in the Western Conference playoffs with a 116-108 victory over the Utah Jazz on Monday night.

Anthony Davis scored 42 points and grabbed 12 rebounds as the Los Angeles Lakers clinched the No 1 seed in the Western Conference playoffs with a 116-108 victory over the Utah Jazz on Monday night.

LeBron James contributed 22 points and nine assists and Dwight Howard added 11 points as the Lakers improved to 2-1 in restart games, rebounding from a loss to the Toronto Raptors on Saturday. Donovan Mitchell scored 33 points, 21 of which came in the first half, and Mike Conley added 24 as the Jazz lost their second consecutive game.

Davis was more involved from the outset. He had 13 points and 14 shots from the field in the first quarter and finished 13-of-28 from the field, including 4-of-8 from three-point range.

Rookie Zion Williamson scored six of his 23 points down the stretch as the New Orleans Pelicans held off the Memphis Grizzlies 109-99.

Williamson, who had played a total of just 29 minutes in the first two games of the restart after leaving the NBA’s bubble to tend to a family emergency, played 25 minutes. He scored six straight Pelicans points as they increased a four-point lead to eight with 1:48 left.

New Orleans (29-38) won for the first time in the restart to tighten the battle for the final playoff spot in the Western Conference. The Grizzlies (32-36) fell to 0-3 in the restart and saw their hold on eighth place continue to loosen.

Brandon Ingram led the Pelicans with 24 points, JJ Redick had 16, and Josh Hart and Jrue Holiday scored 15 each. Jaren Jackson Jr led Memphis with 22 points, Grayson Allen scored 17 (all in the first half) and Dillon Brooks scored 15.

The Pelicans led by seven at halftime and increased the edge to 11 points twice early in the third quarter before the Grizzlies rallied. Memphis pulled even at 65 on Brooks’ jumper, and moments later he hit a three-pointer to give the Grizzlies a one-point lead.

Five straight points by Redick gave the Pelicans an 88-78 lead early in the fourth quarter. Jackson scored eight straight Grizzlies points as Memphis got within 92-88. Ingram made a three-pointer and another basket to give New Orleans what proved to be a decisive 97-90 lead.

Fred VanVleet scored a career-high 36 points, leading the Toronto Raptors to a 107-103 win over the Miami Heat.

VanVleet made 8-of-16 from the floor, including 7-of-12 on three-pointers, and 13-of-13 free throws as Toronto surged to a sixth successive victory that keeps them second in the Eastern Conference behind leaders Milwaukee.

Miami were led by Goran Dragic’s 25 points, five rebounds and five assists with Kelly Olynyk (17), Jimmy Butler (16) and Jae Crowder (16) also chipped in a game which saw the Heat playing catch up for long periods.

The third quarter looked like proving decisive as the Raptors moved out to a 17 point lead at one stage, VanVleet erupting for 18 points in the period. But Miami made inroads and trailed by five heading into the final period.

Dragic’s missed free throw with 40 seconds left could’ve tied the score, as the Heat errors crept in. A turnover off of Butler’s hands with 17 seconds left also hurt Miami and Butler’s errant pass with 7.4 seconds left sealed the win for Toronto.

Shake Milton hit a three-pointer with 7.2 seconds remaining to lift the Philadelphia 76ers past the San Antonio Spurs 132-130.

Joel Embiid led the Sixers with 27 points and nine rebounds. Tobias Harris scored 25 points and Josh Richardson added 19 as the 76ers improved to 40-27. Milton scored 16 points after going scoreless in a six-point loss to the Indiana Pacers on Saturday.

DeMar DeRozan paced the Spurs (29-37) with 30 points, Rudy Gay added 24 and Derrick White had 20. Keldon Johnson contributed a career-best 15. The Spurs had several chances to win the game in the paint but couldn’t convert.

Ben Simmons fouled out with 2:12 left and DeRozan made both free throws for a 125-123 San Antonio advantage. Harris shot an air ball on the Sixers’ next possession, and DeRozan drove to the basket for a four-point Spurs lead with 1:41 remaining.

Nikola Jokic scored eight of his 30 points in overtime to help the Denver Nuggets to a 121-113 win over the Oklahoma City Thunder.

With the Nuggets down three starters due to injury, Michael Porter Jr moved into the starting line-up and had a career game, leading Denver with 37 points.

But late in regulation and overtime, it was Jokic who took control. He scored five points in the final 2:04 of regulation to help the Nuggets force overtime after falling behind by seven with less than four minutes remaining. He finished with 12 rebounds and 10 assists.

The Nuggets were disjointed in a loss to Miami in their first game back from the long layoff, but that wasn’t the case against the Thunder, thanks in large part to Porter’s strong performance. He finished 12-of-16 from the field with 12 rebounds.

Each team had a chance to win in the closing seconds of regulation. First, with the Nuggets up one, Chris Paul was fouled by Paul Millsap with 2.9 seconds left. Paul missed the first and had to hit the second to salvage a tie. Denver had a shot to win at the buzzer, but Troy Daniels’ runner at the buzzer hit off the back of the rim, sending the game to overtime.

TJ Warren recorded a game-high 34 points as the Indiana Pacers scored 22 of the final 24 points in the third quarter to pull away from the Washington Wizards and seal a 111-100 victory.

Malcolm Brogdon chipped in with 20 points, seven rebounds and a team-high six assists for the Pacers (41-26), who have won both their games since the restart of the NBA season.

Thomas Bryant had 20 points to pace the Wizards (24-43), who fell to the brink of elimination from the Eastern Conference playoff chase with their third straight loss.

After a tight first half that featured nine lead changes and four ties, the Wizards got within 68-66 on a Bryant three-pointer with 5:25 remaining in the third period. The rest of the quarter belonged to the Pacers, however, with Myles Turner igniting a 22-2 burst with a dunk. Warren had two traditional three-point plays in the decisive run.

Washington got no closer than seven the rest of the way, the last time when Isaac Bonga dropped in a lay-up to cut the gap to 107-100 with 1:16 to play. But Aaron Holiday iced the win with two free throws with 42.0 seconds remaining.