Losing so many fights to COVID-19 in June and July has prompted Bob Arum and his matchmakers to alter their approach when his promotional company brings boxing back to ESPN later this month.

Arum plans to construct seven-fight cards for six straight Saturday nights, starting August 22 and ending September 26. Having that many fights on Top Rank’s cards will afford the company more flexibility if fighters test positive for COVID-19.

Arum expects ESPN to televise four fights apiece during those Saturday shows. The remaining three bouts likely would be streamed on ESPN+, the platform Top Rank and ESPN used for preliminary undercard bouts before the pandemic began nearly five months ago.

“We’re gonna go, when we start again, to seven fights on the cards,” Arum told BoxingScene.com, “figuring that we’re gonna lose one or two along the way. For example, let’s assume we do an event and all seven get through the COVID-19 testing. We’ll take three fights and maybe show those on ESPN+ or show highlights on ESPN, and still go with four on the telecast. We’re doing the best we can. At least the fighters understand what we’re up against.” 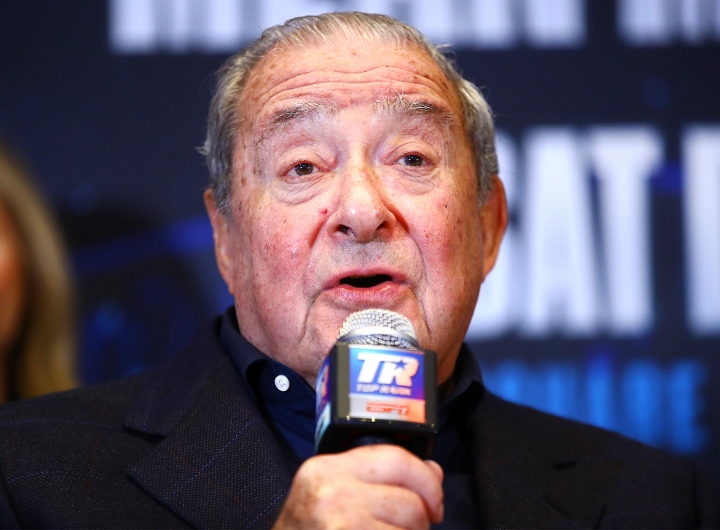 Top Rank built mostly five-fight and sometimes six-fight cards when ESPN brought boxing back to its airwaves June 9. Seven of the last 10 Top Rank main events on ESPN either were altered, canceled or postponed due to COVID-19, injuries and a failed performance-enhancing drug test before they took a break following the July 21 telecast from MGM Grand Conference Center in Las Vegas.

Each of the 13 Top Rank cards ESPN aired from June 9 to July 21 took place either on Tuesday nights or Thursday nights. Top Rank shows shifted back to Saturday nights, more traditional time slots for boxing, because ESPN has other live sports programming on weeknights now that the NBA, MLB, MLS and WNBA seasons have resumed or started.

One of the main events ESPN postponed during Top Rank’s run in June and July will headline its August 22 show from MGM Grand Conference Center.

Colombia’s Eleider Alvarez (25-1, 13 KOs) and Long Island’s Joe Smith Jr. (25-3, 20 KOs) will meet in the 12-round main event that night. The winner of their WBO light heavyweight elimination match will compete for the WBO’s 175-pound crown in his following fight.

Whoever emerges victorious when the third-ranked Alvarez and the fourth-rated Smith meet will face the winner between Russians Umar Salamov and Maksim Vlasov. Salamov (25-1, 19 KOs) is ranked number one by the WBO and Vlasov (45-3, 26 KOs) is ranked second.

Alvarez and Smith were supposed to square off in ESPN’s main event July 16, but their fight was postponed late in June because Alvarez suffered a shoulder injury while training.