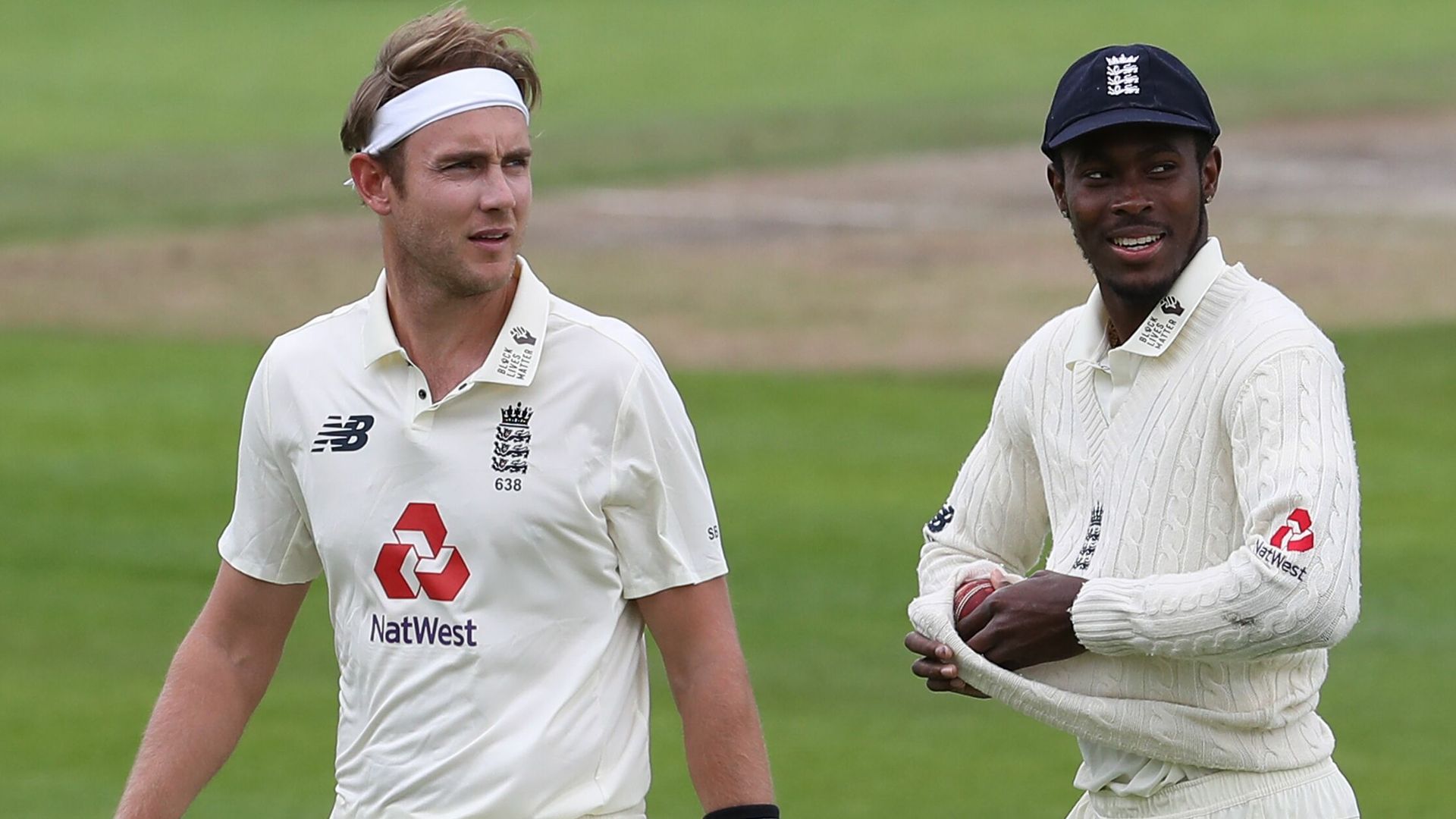 One of the biggest talking points of this more bizarre cricketing summers has been over what team England will pick – even more than usual.

‘Rest and rotation’ was always expected for a gruelling schedule consisting of six Test matches spaced across only seven weeks, but Stuart Broad’s omission for the first of those was still a massive shock.

So, ahead of the first Test against Pakistan on Wednesday – live on Sky Sports Cricket from 10.30am – our writer David Currie attempts to predict which direction England will go in this time, assessing the options they have available to them…

Surely England won’t make the same mistake as they did against the West Indies when digging themselves a 1-0 hole to climb out of?

Broad has since revealed he was so down after being dropped for that first Test of the summer at The Ageas Bowl that he “one hundred per cent” considered retiring.

Thankfully Broad stuck around long enough to take a series-leading 16 wickets – passing 500 for his career along the way – at an average of just 10.93 in leading England to victory in the next two Tests – earning player of the series honours.

Starting on Wednesday would represent a third Test in the space of 20 days for the 34-year-old but, given his stunning performances in the Emirates Old Trafford surroundings against the Windies, expect England to keep him on for the solitary Test to be played there.

It is the return to Southampton for the second (and third) Test that is more likely to bring about another – if any – stint on the sidelines.

So, with Broad, you’d imagine, likely to play, that leaves Anderson the most likely target for any continued ‘one of Broad and Anderson should be rotated’ rhetoric.

The recently-turned 38-year-old has said he is targeting playing at least four out of six Tests this summer, which would see him rested for one of the next three against Pakistan.

While the notion that Anderson and Broad can no longer, and should no longer play together has been dispelled, England may prefer to have the experience of at least one of them for each Test of what is sure to be a fiercely-contested series.

If that’s indeed the case, Anderson might be the one to make way this week. That said, would England want to risk playing Anderson – so troubled with injuries over the past 18 months – in back-to-back Tests to end the series?

Anderson told Sky Sports he felt “fresh and in good rhythm” after being rested for the second Test against West Indies and England may well want to replicate that ‘start him, sit him, start him’ formula for this series

If Anderson is indeed ‘rested’ for the first Test, then Wood is the most likely to come in.

Wood has become somewhat of a forgotten man due to the success of England’s seam attack in his absence for those back-to-back wins over West Indies, but it should not be overlooked that the dropping of Broad for the first Test was due in large part to England’s desperation to get Wood into the Test team and, specifically, in the same side as Jofra Archer.

Wood took 12 wickets at just 13.58 runs apiece in the winter tour of South Africa, nine of which coming in his last outing in Johannesburg. England want pace as part of a varied bowling attack and Wood was seriously quick in that series!

Michael Atherton, ahead of the summer, predicted England would try to play Wood in at least two of the three Tests scheduled for Emirates Old Trafford – a ground more conducive to his reverse-swing skills – only for England to confound those predictions by playing him in at Southampton and in neither game in Manchester.

Could it be third time lucky for Wood in the north west?

While Wood and Archer will (hopefully) play in the same Test team on many more occasions, specifically looking towards the Ashes tour of 2012/22, it is more likely that their opportunities – certainly on home soil – will be at the expense of the other and in support of the Broad, Anderson (and even Chris Woakes) axis.

Archer, having missed the second Test against West Indies as punishment for breaking bio-secure rules, should still be well rested and capable of going again to start the series against Pakistan.

We’re yet to truly see the best of him this summer, with only four wickets taken across two Tests, at an average of 50.50, but there have been undeniable glimpses of his incredible talent.

Woakes played back-to-back Tests at Emirates Old Trafford, so could well be rotated here, keeping him fresh for the remainder of the series.

He is not one to be typically injury-prone and, though he is now 31 and will need more looking after in the years to come, he is probably more than capable of getting through the next week at Emirates Old Trafford.

That said, England have a ready-made replacement waiting in the wings in the form of Sam Curran, who could easily step into Woakes’ role at No 7 in the order and as fourth seamer.

Plus, if England do decide to go top heavy for the first Test, with Broad and Anderson both playing, they’d probably like the 35 Tests worth of experience and 106 wickets of Woakes to be ready as insurance for the second game of the series when one or perhaps even both of England’s leading wicket-takers might be absent from the attack.

It has long been said that Curran ‘never lets England down’.

When picked, he invariably has an impact – like in the second Test against the West Indies, where he chipped in with three important wickets – so England will feel perfectly comfortably slotting him into the side, if needed.

Another factor that could aid Curran’s cause for selection is the fact that his foot marks, as a left-arm option, brings offspinner Dom Bess more into play.

Bess wasn’t required in the third Test due to the brilliance of England’s seamers in dispatching the Windies batsmen, but there appeared to be plenty turn and bounce on offer at Emirates Old Trafford to encourage the spinner.

As yet unmentioned, but the most important factor in determining how England line up for the first Test against Pakistan is the fitness of Ben Stokes.

Stokes is the first name of the team sheet – well, second maybe to skipper Joe Root – due to his brilliance as a batsman alone, but he also crucially balances the team in his usual role as the fourth seam option.

Stokes was picked purely as a batsman last time out, after pulling up with a bit of stiffness when bowling in the second Test against West Indies and, as such, Zak Crawley was the unfortunate man to miss out in order to strengthen the bowling reserves.

Crawley will almost certainly come back into the side should Stokes prove he’s fit enough to bowl, but even if not, England may still decide to stack the batting for the first Test.

England are starting from scratch against Pakistan and not chasing the series like they were against West Indies, so they could look to sure up the batting in the hope of earning a draw (at the very least) to start the series.

Picking just the four-man bowling attack is a risky, and unlikely strategy, however, particularly given the nature of this condensed schedule this summer and the fear of injury to one of those four which would leave England severely weakened.

England’s record in the opening Test of series’ in recent times is appalling; in series’ consisting of at least two Tests, England have lost the opening match on each of the last five occasions, and that extends to eight defeats in 10 stretching back to the 2017/18 Ashes.

England will be desperate to fix that, and equally eager to learn from their mistake with the team selected for the first Test against West Indies.

As such, they should play Anderson and Broad now and then take a view at The Ageas Bowl as to whether to rest either of them. Plus, with white-ball cricket exclusively to follow this series, England can perhaps afford to push the pair a little more than against the West Indies, when these Pakistan Tests were still lingering over their heads.

You’d imagine Crawley only plays if Stokes is fit enough to bowl, while the likes of Woakes, Wood and Archer will be rotated over the series – half in the hope of keeping them fresh for the ODIs against Pakistan, and perhaps Australia, to follow.

England next face Pakistan in a three-match Test series starting on Wednesday, which you can watch live on Sky Sports Cricket from 10.30am.