The year 2020 hasn’t been particularly friendly to most people, but Jessica McCaskill is one of the few to enjoy a little bit of good fortune professionally.

The unified junior welterweight champion was originally slated to face Cecilia Braekhus on April 17 in Oxon Hill, MD in a bout slated for a DAZN undercard, a monumental opportunity to face the fighter who has held the consensus title of pound-for-pound best in women’s boxing for years. Unfortunately, April 17 was barely a month after the majority of the United States entered stay-at-home orders of various degrees due to the COVID-19 pandemic, and the event was cancelled altogether.

But McCaskill simply understood her bout as being postponed, and turned the subsequent months into one big, long training camp. Now, on August 15, she’ll not only face Braekhus for her welterweight titles, but the two women will headline the event on DAZN, a first for the company, after the original main event of Julio Cesar Martinez vs. McWilliams Arroyo was postponed. The event will be staged outdoors in Tulsa, OK, with the ring literally set up in the street.

“There’s a lot of people complaining about quarantine, and 2020 in general, but I’m just trying to take full advantage of anything I can, because that’s what you do–you make lemonade out of lemons, or maybe lemonade and tequila,” joked McCaskill.

Under normal circumstances, McCaskill’s schedule is overwhelming to say the least. In addition to her job as world champion boxer, she also works full-time as an investment banker. The 35-year old has described her hectic routine in the past, which involves running in the morning before her 6:30 AM shift, sometimes running during her lunch break, leaving the office at 3:30 PM and heading straight to the gym.

However, the normalization of remote work during this time has actually made things a little easier for McCaskill.

“Having to work through quarantine at my day job and training, it’s been a little bit of an easy transition, because I’m basically always at the gym. At the gym or my house, and more gym, I’m pretty much just home to take care of my dog,” she said. “The only other things I really do is get groceries once in a while. I’m basically self-quarantining without trying, everything is just so focused.”

It would be unthinkable for a unified champion in the men’s ranks to hold down a day job, but such are the harsh economic realities of women’s boxing. However, the informal tournament being contested between Braekhus, McCaskill, Katie Taylor, Delfine Persoon and Amanda Serrano promise bigger paydays and more significant billing than women’s fighters have grown accustomed to.

Though she is a dual champion moving up in weight, McCaskill has at times felt like a forgotten entity, with much of the focus on Braekhus, Taylor and Serrano and which of the three will be the last woman standing. The male equivalent would be Josh Taylor moving up in weight to take on a welterweight champion, which would understandably be treated like a big deal. McCaskill hasn’t received that kind of buzz, in the shadow of three of the most recognizable women’s fighters in the sport. 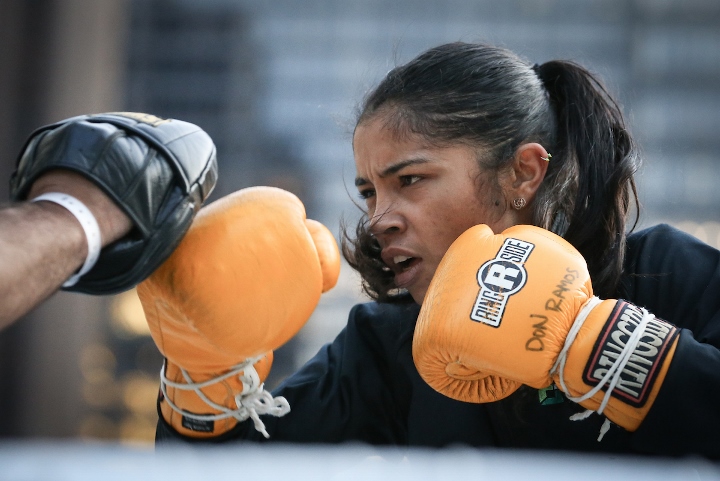 “Everyone overlooked me. At the beginning of the tournament, there were literally images of the other three girls and not me. The media doesn’t control what you think, but it controls what you think about. Either way, I’m gonna do my job, and it’s going to come to a head whether people like it or not. We’re just doing to do things the right way, the fair way, and take over,” said McCaskill. “My face is usually used on American holidays when it’s needed to support America and a certain brand. I’ve seen that a lot.”

With her additional time to prepare, McCaskill has been able to further acclimate to her new fighting weight. At the end of 2020, she adopted a vegan diet, but after consulting her cousin slash nutritionist, who is also a competitive bodybuilder, reverted back to a more regular diet in order to keep healthy weight on to feel strong at 147. At the WBC’s 14-day weigh-in, McCaskill tipped the scale at just over 150 pounds, a weight she says she feels strong and powerful at.

Alongside her trainer Rick Ramos, McCaskill has spent the additional downtime studying tapes of Fernando Vargas, Miguel Cotto and Canelo Alvarez, specifically fighters who can oscillate between pure boxing and smart pressure. “Tactically, I tend to have a lot of pressure, but I also have a boxing side, and we’ve been known to switch those off and on when needed,” she said.

What she hasn’t done, however, is extensively study Braekhus, preferring to not review tape of her opponents so as to not enter the ring with any preconceived notions about their tactics.

“Honestly, boxing is probably one of the most sporadic, volatile type of sports where you can’t predict it,” said McCaskill. “You may go into a fight at one weight and it changes, you may go into a fight for a title and then that changes, you may be fighting a certain person and then that changes. So many of those things happen on a regular basis, to no fault of anyone, and you just have to be prepared for those changes. Knowing that my sport exists within those realms, nothing really surprises me, I just have to be prepared for anything.”

Considering the way the last six months have gone, expecting wholesale change might in fact be wise.

Valdez: In The Berchelt Fight, Friendship Goes Out The Window, Losing is Not an Option!