The hunt is on for another opponent to face The Mean Machine.

A planned September 12 doubleheader on an ESPN platform is in the works for Top Rank, though not in the form as previously suggested by media outlets. Welterweight contender Egidijus Kavaliauskas will appear on a show that will include a reported matchup between featherweight contenders Miguel Marriaga and Joet Gonzalez.

BoxingScene.com has learned that the opponent for Kavaliauskas is still being sought. Efforts to match up the former title challenger from Lithuania with Albany’s Amir Imam never moved beyond the discussion stage, as the bout was never finalized nor signed by either party, according to sources with knowledge of such talks. 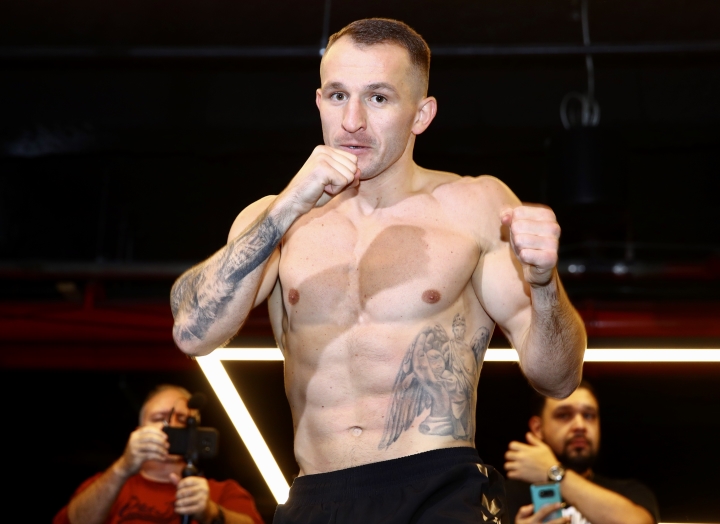 Kavaliauskas (21-1-1, 17KOs) has not fought since a 9th round stoppage loss to three-division and reigning welterweight titlist Terence Crawford (36-0, 27KOs) last December at Madison Square Garden in New York City. Their main event served as the most watched ESPN bout of 2019, averaging 1.35 million viewers.

It also marked the lone loss in the career of Kavaliauskas, a two-tour Olympian for Lithuania who was also held to a 10-round draw versus Ray Robinson in his previous encounter last March.

A proposed bout with Imam (22-3, 19KOs) would have pitted former title challengers coming off of a loss. Imam landed on the wrong end of a minor upset in his most recent ring appearance, dropping an eight-round decision to Javier Molina (22-2, 9KOs) this past February at MGM Grand Garden Arena in Las Vegas. The bout was his second since singing with Top Rank in 2019, making his debut with the company with a 4th round stoppage of Marcos Mojica last November in Fresno, California.

The next fight for Imam—who trains in South Florida—is not yet known. It won’t come versus Kavaliauskas on September 12, nor was clearance ever granted by Top Rank or anyone from either side as the bout was never signed.

Signs continue to point toward firm plans in place for the featherweight clash between Marriaga and Gonzalez, which BoxingScene.com has learned is still in the process of being finalized.

Common themes exist between the featherweights, both of whom have come up short in title fights and have seen scheduled bouts in 2020 shut down due to the ongoing coronavirus pandemic.

California’s Gonzalez (23-1, 14KOs) has not fought since a 12-round defeat to Shakur Stevenson in their vacant WBO title fight between unbeaten featherweights last October. The 26-year Los Angeles native was due to headline a Golden Boy DAZN Fight Night card on March 19, only for the event to get shut down due to global health crisis.

The same circumstances denied Colombia’s Marriaga (29-3, 25KOs) the opportunity to challenge Stevenson (14-0, 8KOs) for the title on March 14. Their ESPN-televised headliner from Madison Square Garden’s Hulu Theater was among the very first bouts to be removed from the spring schedule.

Marriaga was offered a make-up headliner on July 16, where he was due to face Philippines’ Mark John Yap on a Top Rank Boxing on ESPN show live from a quarantine-friendly MGM Grand Conference Center (“The Bubble”) in Las Vegas. The bout survived COVID protocols, but never saw the light of day. Yap showed up nearly nine pounds above the contracted 128-pound limit, resulting in the Nevada commission cancelling the fight and marking the second time in four months where Marriaga saw a full training camp go to waste.

Once his bout with Gonzalez is finalized, Marriaga will return to The Bubble in hopes that the third time will be a charm in terms of making his way to the ring. Hopefully some time long before then, an opponent will have been secured for Kavaliauskas to enjoy his first fight in 2020.