The opening bout of Showtime’s first live boxing event in 141 days managed to deliver a leading candidate for 2020 Knockout of the Year.

Unfortunately, it also produced one of the worst official scorecards in a year filled with questionable judging. 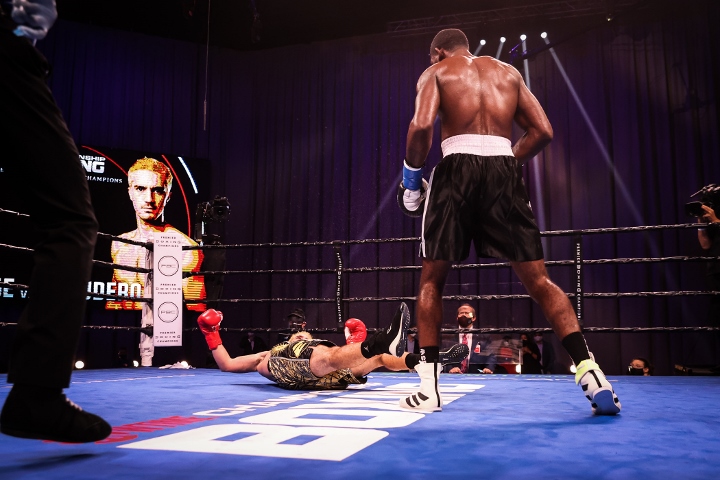 George was trailing in the eyes of two of the three judges through eight rounds, with judges Don Trella and Steve Weisfeld scoring the contest 79-73 and 77-75, respectively, in favor of Escudero at the time of the stoppage. Judge Tom Carusone was watching a different fight altogether, as the locally based official had George ahead 79-73 by the time a left uppercut crashed home on Escudero’s chin to end the fight 0:30 into round nine.

The two-point margin between the scorecards of Trella and Weisfeld were in line with how they both viewed the contest, agreeing on six of the eight scored rounds. Both officials had Escudero claiming rounds 4-7, while awarding George round eight—one of just two rounds where all three judges were in agreement.

Weisfeld—a 29-year judge from River Vale, New Jersey and universally hailed as one of the best in the sport—had George taking rounds one and two, then not awarding the Houston native another frame until round eight.

Carusone apparently showed more ring rust than either of the two in-ring participants who hadn’t fought since their first bout last November. Carusone worked a fight for the first time since last December, though his scoring performance won’t earn him any favors in the near future. The 11-year ringside scorer from Connecticut had George winning all but round four—the lone frame in which Escudero swept on all three cards and the only other round besides eight (George) scored in the same direction.

Controversial scoring was a point of contention in the first fight, in which Houston’s George claimed a 10-round split decision last November, which aired as part of Showtime’s ShoBox series live from WinnaVegas Casino in Sloan, Iowa.

The dispute warranted an immediate rematch, which was originally due to take place as part of a Showtime Championship Boxing (SCB) tripleheader from Park MGM in Las Vegas. The event was shut down due to the ongoing coronavirus pandemic, with Saturday’s card marking the first boxing card since March 13, and the first SCB-branded event since February 8.

Escudero seemed to be in control far more in the rematch, as George was inactive for lengthy stretches in every round. The more substantive blows were landed by the unbeaten Houston native on the occasions he let his hands go, never more evident than the final left uppercut which put Escudero flat on his back and out for the night.

The knockout removed any controversy from the final outcome, though a fate that could not escape Tom Carusone once the scorecards to that point were officially submitted to the commission.